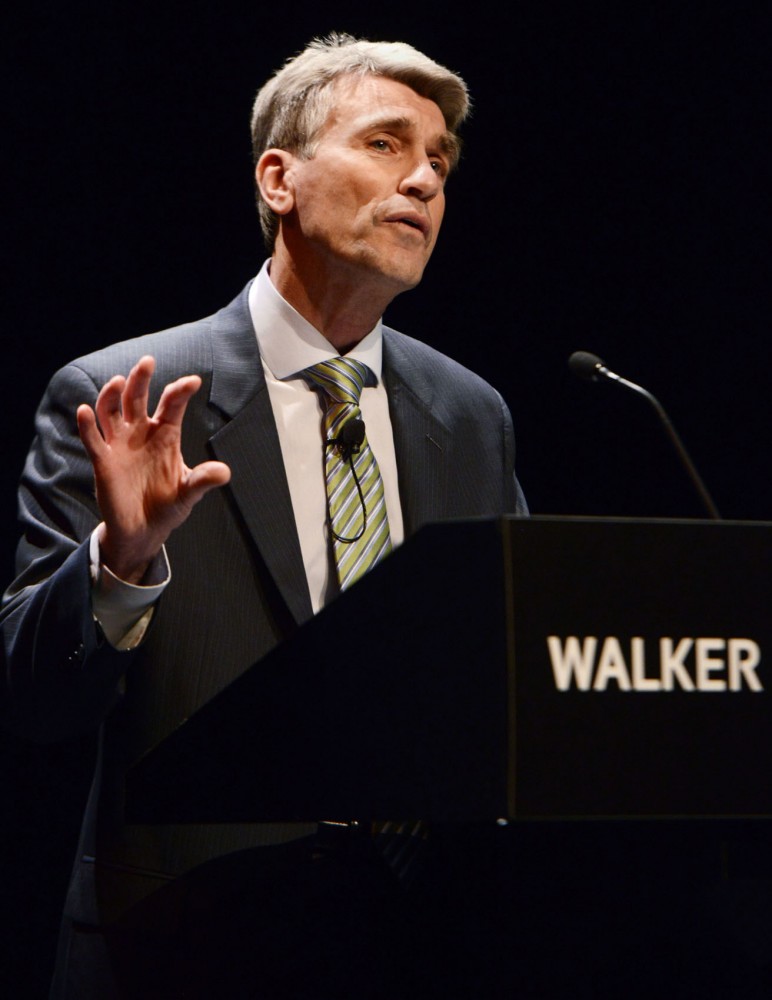 Minneapolis Mayor R.T. Rybak gives his final State of the City address. Rybak's speech looked to the future, envisioning Minneapolis as a larger, more diverse city packed with transit and green space by 2025.

In what was his last State of the City address, Minneapolis Mayor R.T. Rybak looked to the future rather than reflecting on the past.

“I thought it would be better to talk about the next 12 years than be nostalgic about the last 12,” he said.

Rybak has no plans to be mayor in 12 years, but for almost half of his speech at the Walker Art Center, he spoke as if he were giving the 2025 State of the City address and talked about the great strides made between now and then because of initiatives in the works right now.

The 2025 Minneapolis that Rybak described was a bigger, greener, more diverse and livable city. The population grew to 450,000 people, but vast transit improvements meant no increase in cars. The achievement gap in north Minneapolis and across the city had been reduced, and global warming meant a huge influx of people were coming to the city — though palm trees still couldn’t grow here, he joked.

Rybak then transitioned into the present day, outlining the steps the city could take in his last year — and beyond — to reach the idyllic 2025 he described.

Financially, Rybak said the city has set the foundation for future success by making tough but responsible decisions throughout his years in office. He said the city has avoided $241 million in debt, fixed a broken pension system and restored the city’s AAA bond rating.

Public safety is also vital for future growth, Rybak said, and much more work needs to be done to limit gun violence.

He joined Milwaukee Mayor Tom Barrett in hosting a Midwest cities guns summit in January and called on government to do more to stop guns from getting into the hands of the wrong people.

“I believe there is absolutely no excuse for our Congress and our Legislature to look at what’s happening and not act,” he said.

Reducing the achievement gap in the city, particularly in north Minneapolis, is also important, he said, because much of the population growth throughout the next 12 years will be among minorities.

“We have to eliminate the economic disparities,” he said.

Rybak said he envisioned a 2025 north Minneapolis where the schools are among the top-rated in the country and people scramble to move to that area.

Another idea for north Minneapolis, he said, is to build a bike connection between the area and Northeast Minneapolis similar to the Midtown Greenway in south Minneapolis.

Rybak also talked about efforts that can grow the city to 65,000 more people by 2025 without “adding a single car to the road.”

In order to do that, Rybak said the city will need to grow along transit corridors, including areas near Prospect Park and the West Bank.

Streetcars are near the top of Rybak’s priorities for transit, and he pointed to the success similar cities like Portland and Dallas have had with trams.

“When you build modern streetcars that stop at every block, it not only gets people out of their cars, but it builds development,” he said.

Along with streetcars, Rybak said stable funding is needed for more transit options like bike trails, the light rail and bus rapid transit.

Among many achievements mentioned, Rybak said setting up the STEP-UP Summer Jobs Program — which matches Minneapolis youth to local businesses for paid internships — is the best thing he accomplished while in office. He brought current and former participants in the program on stage with him and said they would be the future of the city.

“I know when I look into their eyes that while I may no longer be leading the city, Minneapolis’ future is in very good hands,” he said to conclude the speech.

The full Minneapolis City Council, as well as candidates to replace Rybak, was in attendance for his last State of the City address, and many of them came away happy with what they heard.

City Councilman Don Samuels, who’s hoping to replace Rybak, said he was glad the mayor put an emphasis on helping those most in need, like residents of north Minneapolis.

“Where there is greatest need, there needs to be the greatest resources,” he said.

The style of speech, in which Rybak played the role of 2025 mayor, also received praise.

Councilman Cam Gordon said it got people thinking about the future.

“I thought it was really interesting that he decided to talk as if he was in 2025,” he said. “I thought that probably got people thinking about what it should be and what kind of city we want.”

Mayoral candidate Mark Andrew said Rybak’s agenda is largely in line with his platform, but he’d like to fast-track the transit initiatives.

“He’s got a big vision,” he said, “but I want to create an accelerated program so we can get street cars, light rail and biking trails implemented on a somewhat faster timetable.”