Changes in store for Masonic

The Masonic Memorial Building may be the site for a new University health facility. 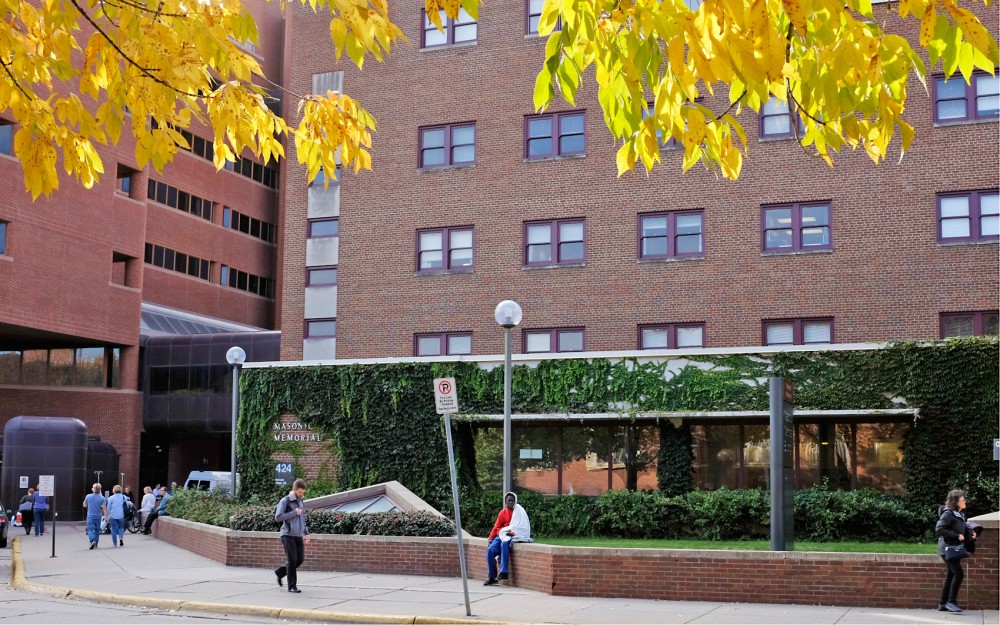 The Masonic Memorial Building, which may be demolished to make way for a new health facility, is seen from Southeast Harvard Street on Tuesday afternoon.

Raj Chaduvula
A nearly 60-year-old University of Minnesota medical building could be the future site of new health facilities.
The Board of Regents is asking the state Legislature for around $66 million for new education and training facilities for the school’s Academic Health Center, and the Masonic Memorial Building, which houses cancer clinics, could come down to make room for the proposed buildings.
School leaders are just beginning to discuss where the new facilities would be placed, said Lorelee Wederstrom, director of Facilities and Capital Planning. She said so far, they have considered renovating existing facilities, building a new facility or both.
She said the site, located on Harvard Street Southeast, has been slated for demolition since 2000. If school leaders decide to build a new facility, the Masonic Memorial Building would be a good location, she said.
Wederstrom said the building is not as useful as it once was due to advancements in health technology that the building cannot support.
Two of the building’s cancer clinics will relocate to the new Ambulatory Care Center in February. This means the building would no longer serve a clinical purpose in research, said Masonic Cancer Center Director Douglas Yee.
In addition to the cancer clinics, other programs would have to move out before the building can be decommissioned, said Wederstrom.
She said the building would have to be significantly improved to be useful, and even then, the building’s design doesn’t allow flexibility.
Yee said the building has run its course with its existing research capabilities.
The Masonic Memorial Building opened in 1958. The 80-bed hospital primarily served cancer patients.
Yee said that over recent years, the building was also used as an outpatient clinic.
“When that happened, it didn’t have the right kind of layout to be used in the kind of modern way we have in clinic space,” Yee said.
The Ambulatory Care Center, slated for completion in November, will be more optimal for research and clinical practices, he said.
“[The Masonic Memorial Building] was designed as a hospital and doesn’t really work as an outpatient clinic, even though we’ve been using it for 50 years,” Yee said.
The building consists of four levels made up of different health facilities and labs. The first three floors consist of the outpatient cancer clinic, clinical research and the infusion center which deals with chemotherapy, Yee said.
Yee said the first three levels will move to the Ambulatory Care Center.
A new clinic has been discussed for nearly six years, and the Ambulatory Care Center provides an answer to their needs, he said.
“It’s a great opportunity to improve both outpatient services and research,” Yee said.
The University hopes to designate the location for new facilities or renovation this winter, Wederstrom said.
The capital request for the health facility will be sent this spring.
Delete Image
Align Left
Align Center
Align Right
Align Left
Align Center
Delete Heading