The team will play rival Minnesota-Duluth for the fifth time this season. 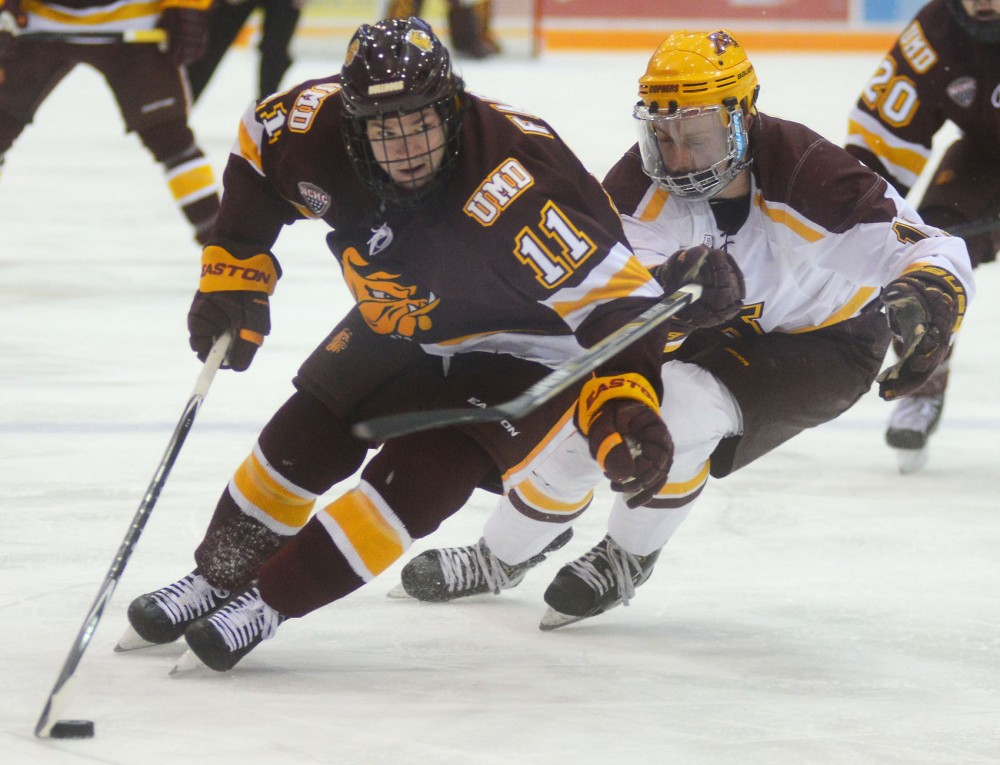 Forward Sam Warning fights for control of the puck against Duluth's Austin Farley on Nov. 14, 2014 at Mariucci Arena.

Two years into what was supposed to be a split, the Gophers and Bulldogs just can’t seem to get rid of each other.

After battling for decades in the WCHA, the two in-state schools moved to separate conferences and were supposed compete apart.

But the first round of the NCAA tournament will mark the fifth matchup of the season between the two programs. The Gophers will have played more games against Minnesota-Duluth than three teams in their own conference, the Big Ten.

“Everybody thought we wouldn’t be playing our old rivals by switching leagues, [but] this is going to be game five. It’s pretty amazing,” head coach Don Lucia said. “[It’s] a good, healthy rivalry with tremendous respect. It’ll be a fun game.”

The Gophers began their season playing the Bulldogs in the Ice Breaker Tournament in Indiana, and now the two teams will meet again in what will be the final game of the season for one of them.

After the opening contest — a 4-3 Gophers victory — the two teams faced off three more times in a home-and-home series in November and the consolation game of the North Star College Cup. All of the last three meetings went the Bulldogs’ way.

“We’re 1-3 against them, which obviously isn’t very good,” senior captain Kyle Rau said. “Last time we played them around the holiday time, we thought we played pretty well. [We] didn’t win the game, but we’re a much different team now. We’re really happy with how far we’ve come and how we’re playing right now.”

When the Gophers lost 2-1 to Duluth in the North Star College Cup, it capped off a 2-5-1 run for the team.

Things began to come together for the Gophers afterward, though, and the team is 12-3-1 since that North Star College Cup loss at the Xcel Energy Center.

“I think right now we’re definitely a harder team to play against,” junior defenseman Brady Skjei said. “I think we were pretty easy to play against for a stretch there, not going to the hard areas [that] it takes to win games and score goals. I think we’re clicking right now on all cylinders, and we’re peaking at the right time.”

The Gophers will likely have to play their best hockey to win against an opponent that has seen them plenty of times this season and knows plenty about their roster.

Minnesota knows plenty about Duluth as well — it views the team much like itself.

“[They’re] pretty similar to us. … I think that’s why our games are so fun,” senior forward Travis Boyd said. “[We’re] not identical, but [we] like to play the same ways, and obviously it’s a rivalry game, too, so it’ll be physical, and it’ll be a heated battle.”

Despite the conference shift, the teams’ rivalry hasn’t gone away. And now, it’s going to play out with everything on the line.

“Obviously, our rivalry games [were] pretty intense games this year and in previous years, too,” Boyd said. “Obviously [Duluth is] not a team we like to lose to, and [we have] a great shot at redemption here [with the] chance to end their season.”