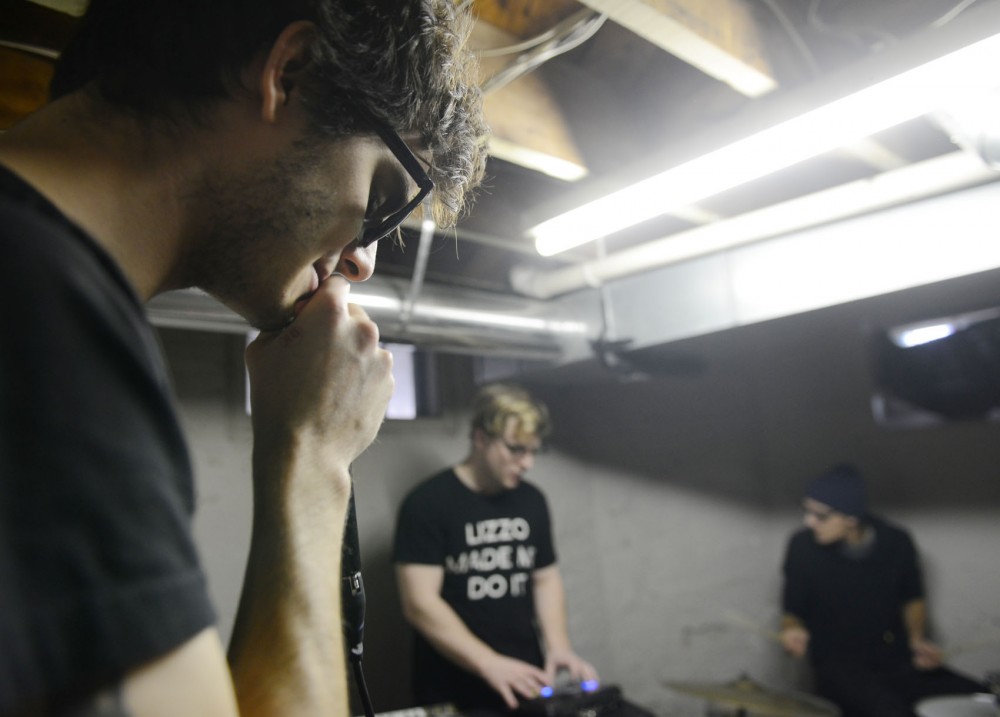 Singer Harry Reynolds and his band Beasthead rehearse Saturday afternoon in their home in Southeast Minneapolis. The band will be opening for Royal Canoe on Nov. 15th at the 7th Street Entry.

Playing a few local shows each week, Minneapolis four-piece Beasthead is used to surprising people with their eclectic hip-hop and rock sound.

For multi-instrumentalist Doug Deitchler, Beasthead’s name juxtaposes with their music.

The name keeps audiences guessing at Beasthead’s shows, including the band’s opening slot for Royal Canoe at 7th Street Entry on Saturday.

All head-banging connotations aside, singer Harry Reynolds said the name comes from his endearment for a lost love.

The song was good enough for Deitchler, guitarist Nick Whebbe and bassist Paul Novak — who played together in various bands throughout high school and college — to invite Reynolds to sing with the band.

Reynolds met his band members while attending college with Deitchler and Whebbe at the University of Minnesota, where Reynolds and Deitchler graduated in 2012 and 2013, respectively.

“I went for two years for engineering,” Whebbe said. “I didn’t go to class very much. I played a lot of guitar.”

Despite the band’s scholarly distractions, Deitchler said going to the University helped them start strong.

“We won a Battle of the Bands at the ‘U’ when we were still there and got to open on one of the outdoor stages at Spring Jam,” Deitchler said. “It was our third show.”

“I had some old dude be like, ‘Give me your autograph,’” Reynolds said.

Upon graduating, Deitchler spent a year distributing the band’s 2013 debut EP “Tallest Trees” to hundreds of outlets, including fans, publications and blogs.

Eventually, a compilation featuring the band made its way to the Internet overseas, Deitchler said.

“This German blog wrote about it,” Deitchler said. “Since it said ‘featuring Beasthead,’ they thought it was a rapper. So in Germany, we may be blowing up.”

“We’ve gotten criticism for using Auto-Tune on all those songs,” Deitchler said. “We’ve been trying things we’ve never done, and they’re getting better all the time.”

For Reynolds, who introduced the Auto-Tune that’s featured heavily on Beasthead’s EP, using the voice modulator is more experimental than pop-worthy.

“The criticism is, ‘I can’t hear the lyrics,’” Whebbe said.

“I made up the lyrics for all those songs every single time we sang them,” Reynolds said. “I got to the recording studio, and I had to spend a day figuring out what I was singing. Most of it was nonsensical.”

“We’ve been doing this in different ways for so long that it’s natural,” Deitchler said. “Like, some people get into a habit where they exercise every day. We’re in such a habit where we play a show once a week.”

“That’s why I don’t work out,” Reynolds laughed.

What: Royal Canoe with Beasthead