More than 200,000 people attended the parade and festival. 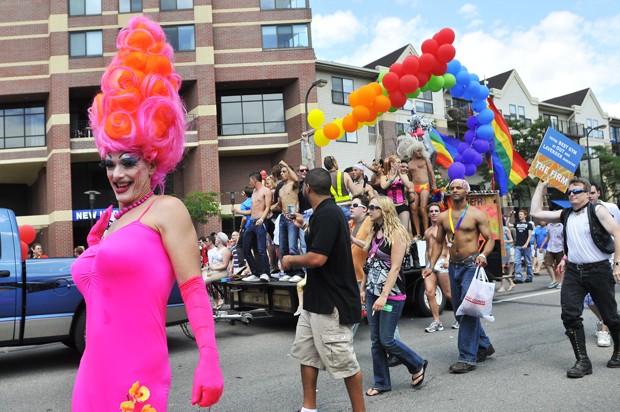 While the park eventually drained and the tables were retrieved, dissenters more difficult to tame than Friday night’s heavy rains were expected at the event.

“People come and [say], ‘This looks just like my hometown Potato Days,’ ” said Jim Kelley, a spokesman for the festival.

“So they finally start getting it, that we’re not just some group of sexual deviants,” Kelley said. “We’re real people. We like cheese curds, and we like when people give us free stuff.”

Fourteen churches, including several “reconciling” congregations that accept GLBT members, were present at the festival as well.

Brian Johnson, who garnered community-wide attention when Twin Cities Pride attempted to ban him from Loring Park during the festival, doled out Bibles and anti-GLBT messages, as he had done in years past.

A federal court order allowing Johnson, 53, of Hayward, Wis., to attend succeeded only in attracting more protesters to the event.

Despite the ruling, Bible-wielding protesters posed little threat to a group once rarely recognized, tolerated or accepted by the general public.

The festival has always been a platform for GLBT people and their allies to stand up against mainstream America and make a call for equality.

“I believe the gender binary is outdated,” Aidan Sullivan, a University of Minnesota student minoring in gender, women and sexuality studies said from a feminist booth Saturday. “I don’t believe everyone is just male or female.”

No matter a person’s sexual identification, defining gender in the modern age can be difficult.

Many festival attendees argued that gender, much like race, should not serve as a barrier that keeps people of different backgrounds apart.

But even if people have slowly begun to see things from the GLBT community’s point of view, laws have yet to reflect that vision.

The nation took a step toward GLBT equality when President Barack Obama signed a nation-wide anti-hate crime bill into law in October, but a guarantee of protection from assault did not mean equality in all things.

The U.S. military still subscribes to its “don’t ask, don’t tell” policy, and only six states have laws that permit same-sex marriage. Minnesota is not among the six.

Kim Jorgensen, a student and part-time GLBTA programs coordinator at the University of Minnesota’s Crookston campus referred to transgendered people when she pointed out another inequality.

“For some people whose gender presentation doesn’t match with the sex that they were assigned at birth, then we cross social barriers such as gendered restrooms,” Jorgensen said.

Jorgensen proposes making the playing field level by introducing single-stalled, locking, gender-neutral restrooms in public places for those who identify as sexual minorities.

Regardless of the status of legal equality, the Pride Festival offered enthusiastic equality in the acceptance of all people — GLBT, straight, or otherwise.

“It offers a safe place to be for everyone,” Kelley said as he walked through crowds of children, adults and the elderly.

Those who identify with the GLBT community “come here and go, ‘Oh, I’m not alone. This will give me the strength to [come out to] my best friend or my family,’ ” he said.

And with more than 30,000 people Saturday in Loring Park, thousands more attending the Pride Parade on Sunday and more than 200,000 expected over the course of the weekend, it was most definitely hard to feel alone at Pride.