Smith out for the season with knee injury

The starting Gophers running back will file for a medical redshirt to be able to play next season. 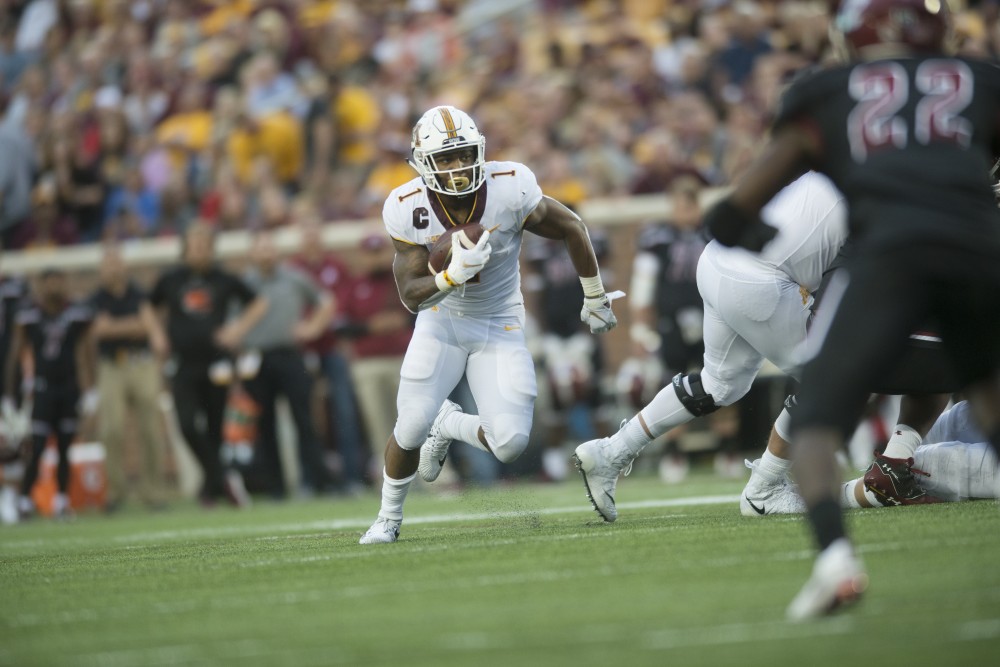 Running back Rodney Smith faces oncoming tackles as his team mates make a path during the game against New Mexico on Thursday, Aug. 30 at TCF Bank Stadium.

Smith, the first-string running back and veteran leader of the Minnesota offense is out for the season due to a knee injury, The Athletic first reported.

“I am devastated for Rodney, but I know he will keep his oar in the water and continue to move forward and attack his rehabilitation process,’’ head coach P.J. Fleck said in a statement. “He is a leader on this team and I look forward to him working with our young players as we continue to grow this season.’’

Smith was carried off the field in the Gophers’ second game of the season after an apparent leg injury in the first offensive drive against Fresno State.

With Smith injured, the Gophers are now down three running backs. Senior Shannon Brooks injured his leg in spring practice and is out for the year and redshirt freshman Mohamed Ibrahim left the first game of the season with a leg injury as well.

“We will file a waiver for a sixth year of eligibility with the NCAA right after the season is over.” Fleck said in the statement. “We believe Rodney meets all the requirements for the waiver and fully expect that it will be granted.”

The Jonesboro, Georgia native moved his way up to seventh all-time among Minnesota running backs this season. He passed David Cobb this season to attain the spot.

Smith finished the 2018 season with 25 carries for 157 rushing yards. He was 38 yards away from having 3,000 rushing yards in his career and he has 21 career rushing touchdowns.

Brooks, who was also a starting running back last year before suffering an injury, will return next year and possibly play some of the 2018 season.

The Gophers will have to turn to true freshman Bryce Williams to fill the big shoes that Smith will leave. Williams finished with 87 yards on 25 carries for the Gophers in their comeback win last week. Redshirt junior Jonathan Femi-Cole will also get some carries as the back-up to Williams.