“The Sexual Lives of Savages” regionally premieres at Walking Shadow

Amy Rummenie directs Ian MacAllister-McDonald’s newest play with a touch of sexy and a torrent of tension. 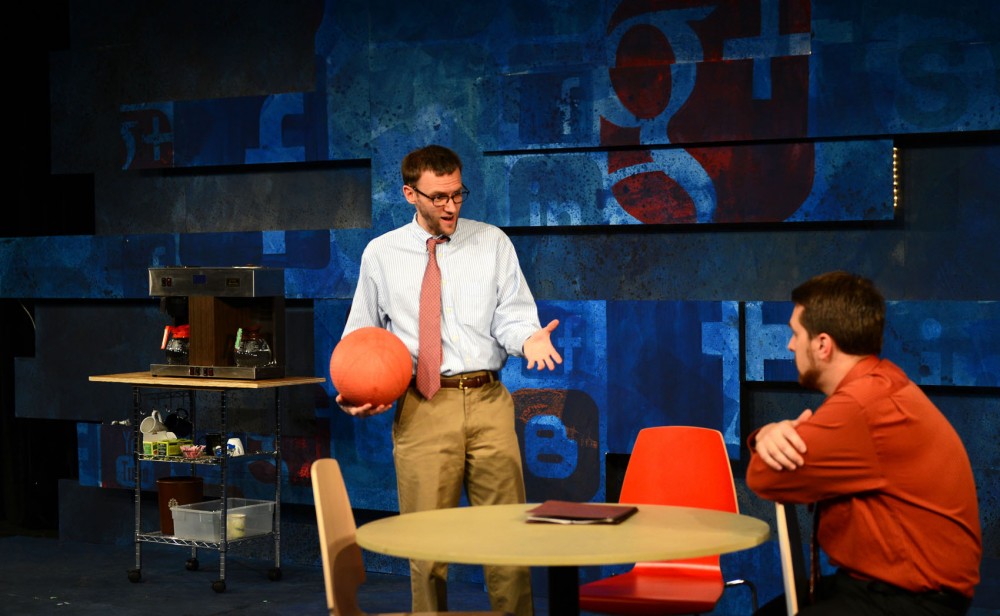 Joseph Bombard and Nicholas Leeman rehearse for "The Sexual Lives of Savages" on Tuesday night at the Minneapolis Theater Garage. The show, directed by Amy Rummenie, gives an honest and funny portrayal of our private lives and how modern generations view sex.

Wondering about the number of partners your significant other has had is normal. To obsess over it, however, is a different story.

That sexy number is the incendiary flare that sets up “The Sexual Lives of Savages,” Walking Shadow Theatre Company’s season opener this year.

Playwright Ian MacAllister-McDonald’s newest work follows Hal, an everyman whose girlfriend has a shrouded sexual history. When he interrogates her about it and gets an answer he doesn’t like, all hell breaks loose.

They begin to question their relationship, and Hal starts to realize just how prevalent sex is in his world. Swingers, carnal connoisseurs and awkward lovers clash in this fast-witted dramedy, much to the delight of director Amy Rummenie.

“Are we the sum of our experiences? How does someone else’s sexuality define your relationship with them?” she said.

These questions are the center of both the play and the early 20th century anthropology book its title comes from. Despite the intensity of the title, the play examines sexuality through humor and snappy verbal volleys. That doesn’t mean it deals with its subject matter lightly, though.

“It’s sort of a play about the biggest small problem,” MacAllister-McDonald said. “In the spectrum of small problems, it’s the sort of stuff that tears couples apart and forces you to take a serious look at who you are.”

The playwright said the characters in “Savages” act as a framework to examine sexuality in society. For him, it’s important to emphasize the countless shades of gray.

“My goal is to give every character on the stage a truly legitimate point of view and see if I can create a circumstance where everyone is right,” he said.

The resulting characters are a mixed bag of sexual adventurers. There are virgins and people who’ve had many partners. Rummenie finds this intriguing and problematic all at once.

While the cast of the show is open and willing to take on challenges, Rummenie said social preconceptions affected their rehearsal room.

It’s slightly easier to explain how to stage-punch someone than to figure out how to be safely intimate. Rummenie said it was imperative the actors feel comfortable with one another, and with a little time and discussion, she feels they’ve reached that point.

Since the subject matter of “Savages” is still difficult for some to grapple with, Rummenie and MacAllister-McDonald hope audience members will consider their own interpretations of sex and how it affects their lives.