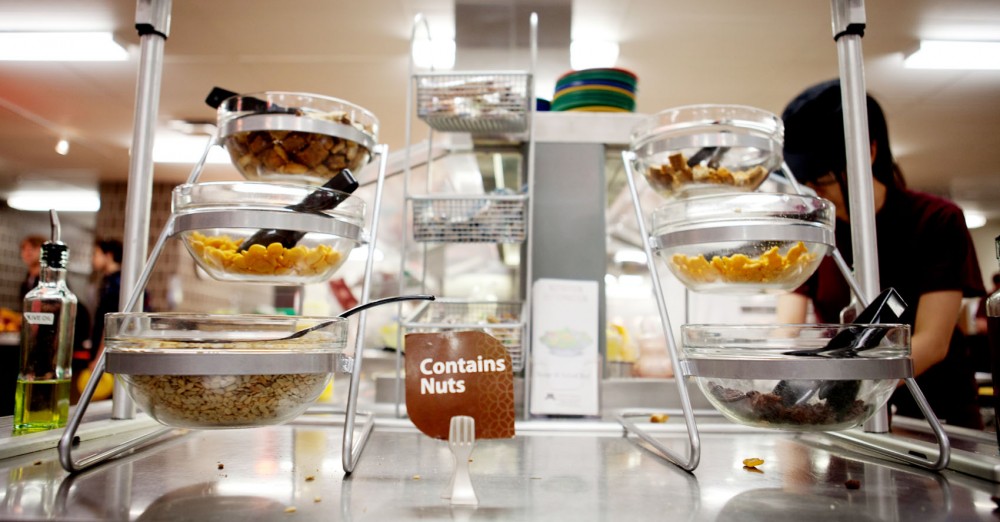 Some students allege that careless labeling and cross-contamination have resulted in allergic or harmful reactions at University dining halls.

Two bites into his kung pao beef in the Pioneer dining hall last Monday, Joel Fowler felt a tingle in his mouth and knew something wasn’t right.

The dish contained peanuts but wasn’t labeled, he said. It was his third allergic reaction in the dining halls.

Alleged careless labeling and cross-contamination have caused problems for some students in the dining halls who have special dietary needs because of allergies or gluten intolerance.

University of Minnesota Dining Services has a nutritionist and other resources available that students with special dietary needs can use to navigate the menus safely, but students say that adds more work to meals.

Fowler, a history senior, said last Monday he had the worst allergic reaction of his life, and he has a very mild peanut allergy. He missed all of his classes last Tuesday because his body was trying to rid itself of the peanuts. Meanwhile, he had to take Benadryl.

He said he can’t count on UDS staff to accurately mark dishes that contain nuts. He said the sign itself is too generic and limits his eating, because he’s allergic to peanuts but not other tree nuts, like cashews.

“I’m sick of filling out comment cards because he just gets brushed off,” she said.

Guest said students often cross-contaminate jelly and peanut butter jars, and the dining staff sometimes does the same in the sandwich line. She said it’s frustrating because Fowler already works to be aware of foods with peanuts in them.

“I don’t think people know how much trouble we’re already going to, and they’re trying to ask us to go to even more trouble for him to be OK,” Guest said.

Jenna Brott, health and wellness coordinator for UDS and a registered dietician, connects with students like Fowler and often has meetings with them and the food manager of the dining hall where they eat.

In addition, nutritional information, including whether the dish is vegan, vegetarian, contains nuts, etc., is available online a week in advance.

She said while the signs showing whether a dish contains nuts should always be out, a self-serving eating environment will always have a risk of cross-contamination.

Brott encourages students to always ask the food manager or cook if they aren’t sure in order to be safe.

Brott works full-time and is a “great resource” for students to use to navigate the dining halls if they have special dietary needs, said UDS director Karen DeVet.

Other students have had problems with cross-contamination as well.

Students for Gluten Free Awareness President Sara Fischer said she had problems as a freshman with UDS because gluten-free items were often cooked on the same surface as other foods that contained gluten.

This cross-contamination can lead to death but has short-term effects of stomachaches and migraines that last until the gluten leaves the system.

She said some of the people in the group have had similar issues. It’s frustrating to her that UDS takes such care to label vegetarian or vegan options but won’t do the same for students with special dietary needs.

The group has, however, been successful in adding other gluten-free items in the dining halls, like bread and pizza, by holding regular meetings with Brott.

Fowler has previously had allergic reactions from eating in the Centennial dining hall during his freshman year — a Honey Nut Cheerio bar made with peanut butter and then suffered from peanut oil being used in a seemingly harmless dish. Both were not labeled, Fowler said.

He contacted UDS after his second reaction and said it immediately improved — “but then they get lazy.”

For example, he said UDS puts a “contains nuts” sign in the middle of all the desserts or leaves the sign out from day to day in front of dishes that can’t possibly have nuts.

Fowler added: “It’s frustrating to try to figure out what I can and cannot eat.”