Daniel Volovets strums to the beat of numerous passions

The University of Minnesota med student released his seventh album, “Masquerade,” on Feb. 20. 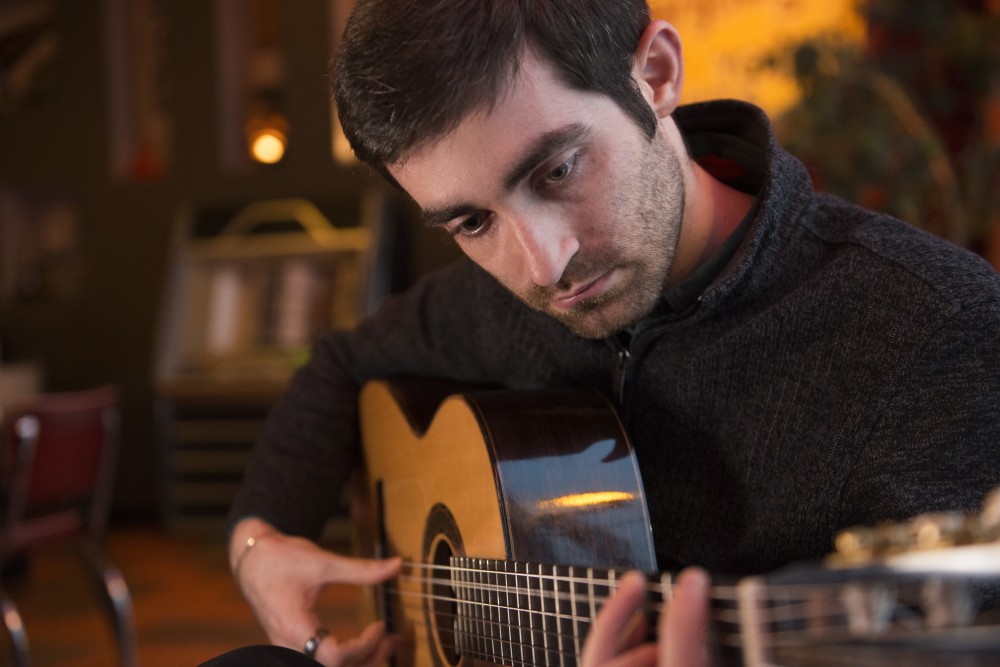 Daniel Volovets, a medical student at the University, plays his guitar in The Bad Waitress in South Minneapolis on Friday, Mar. 1.

It is easy to get lost in Daniel Volovets’ love for classical music.

In conversation, he frequently brings up famous composers alongside obscure ones, expressing what he admires about each.

The University of Minnesota medical student has been plucking away at a guitar for about 20 years, releasing seven albums throughout that time. He composes and arranges music and teaches the instrument to his own students. He will be graduating in May, on his way to become a psychiatrist.

“I don’t get much sleep,” Volovets said.

But music has never felt like an inconvenience to Volovets. He describes his studies in psychiatry and his work with music as equal passions, not competing hobbies.

“Finding the similarities has been helpful,” Volovets said. “I think there’s an art of medicine and a science of music.”

The guitar got sat on, cracked and ruined even further until Volovets finally took it in. He held it in his garage before his father realized the guitar was built by a local man named Steven Kakos.

“We called him and he said that this instrument made its way through many owners and was stolen at some point,” Volovets said.

The family put up an advertisement for it and received no response.

“We said, ‘Well, okay, what do we do with it?’ And [Kakos] said he could repair it for a couple hundred bucks,” Volovets said.

After using the guitar for a few years, Volovets asked Kakos for a new, custom guitar.

Around this time, Volovets began to develop a unique voice with his music. He was still playing classical music, but he combined it with the brightness of flamenco and Brazilian jazz.

His guitar teacher at the time, Tony Hauser, helped him explore this mix, using the sounds that inspired him during his childhood.

“When I first took him on, I asked a friend of mine who had taught a lot of prodigies, ‘How do you know you have a prodigy on your hands?’” Hauser said. “He said, ‘Well when he carries the instrument around with him all the time and doesn’t put it down.’ Well, that was sort of [Volovets] in his early years. He worked hard.”

Volovets came to the University as a PSEO student majoring in music. Around the same time, he released his first album “Watercolors of the World.” The album included pieces that Volovets arranged, as this was before he became more involved in composing.

Once he started composing, Volovets’ music became an even more personal endeavor.

He took sounds and styles he admired from the composers his parents had played in the house while he was growing up. These influences, in addition to music reminiscent of his Russian heritage, are evident on his most recent album, “Masquerade.”

When he talks about his craft, the admiration Volovets has for his instrument is entirely obvious.

“The catharsis that you get through music, you can’t find that through anything else,” Volovets said. “For me, that’s been the greatest therapy, too. Whenever I feel overwhelmed, I just pick up a guitar. I speak best through music.”