Gophers hosting first round; now hoping to win it 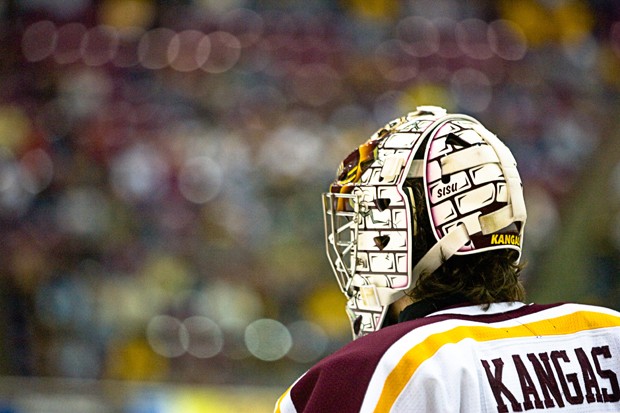 For the better part of two months, the focus of the Minnesota menâÄôs hockey team was salvaging their season for home ice in the playoffs âÄî mission accomplished. The Gophers will host St. Cloud State this weekend at Mariucci Arena for the Western Collegiate Hockey Association First Round Series âÄî guaranteeing fans at least two more times to see the Gophers play at Mariucci Arena this season. The three-game series begins Friday with game two coming the next night. If need be, the deciding game will come Sunday. All three are scheduled for 7:07 p.m. faceoffs. And despite both teams being in the middle of the conference pack, excitement likely wonâÄôt be lacking this weekend as four of the WCHAâÄôs top five scorers will take the ice. In conference games, Minnesota senior Ryan Stoa took the WCHA scoring title with freshman line mate Jordan Schroeder in a close second. But the Huskies have a power duo of their own to match Stoa and Schroeder. Junior Ryan Lasch was fourth in the standings while his line mate, sophomore Garrett Roe, was tied for fifth. In overall games, the roles were reversed âÄî Lasch led the league in points while Stoa and Roe were tied for third. Last year, Lasch and Roe finished one and two in the conference scoring standings with 53 and 45 points, respectively. âÄúTheyâÄôve been some of the leading scorers in the country ever since theyâÄôve been in league,âÄù Stoa said. âÄúTheyâÄôre dangerous; you know theyâÄôre going to get their points.âÄù The Gophers have seen just how scary they are âÄî even if the Huskies havenâÄôt been able to slip by Minnesota yet this season, Lasch seems to have cracked the case. After being held without a point in the first three meetings this season, the Californian tallied a hat trick against the Gophers on Jan. 17 in an 8-6 Gophers win that sealed the teamâÄôs second sweep over the Huskies this season. St. Cloud State is the only team Minnesota has swept all season. The series also has national tournament implications for both teams. âÄúWeâÄôll for sure probably need to win this weekend [to get in],âÄù senior forward Justin Bostrom said before adding the teamâÄôs focus is solely on the Huskies. âÄúWeâÄôre not looking past this weekend.âÄù Kangas gets the nod Less than a week after his goalie posted a second career shutout one night after being benched, Minnesota coach Don Lucia placed MinnesotaâÄôs playoff potential on the goalie that carried the team through the WCHA playoffs and into the national tournament last year. âÄúIf weâÄôre going to do well this time of the year, Alex has to do well,âÄù Lucia said. Lucia also defended last yearâÄôs Final Five MVP, who has struggled over the second half of his sophomore season. âÄúPeople want to speculate about âÄòshould somebody else play or not?âÄù Lucia said. âÄúAlex has been our guy for a year and a half. âÄúHeâÄôs proven himself. HeâÄôs proven to be a very good playoff goaltender throughout his whole career.âÄù Kangas said his team, which went 7-9-2 in the second half after going unbeaten in its first 11 games, somehow got ahead of itself. âÄúI think we were a victim of our own success early on. We started on a downward spiral, we werenâÄôt able to control it,âÄù Kangas said.