Dr. V George Nagobads spent 34 years as the Gophers' team physician from 1958 to 1992, along with five U.S. Olympic teams and the Minnesota Northstars. 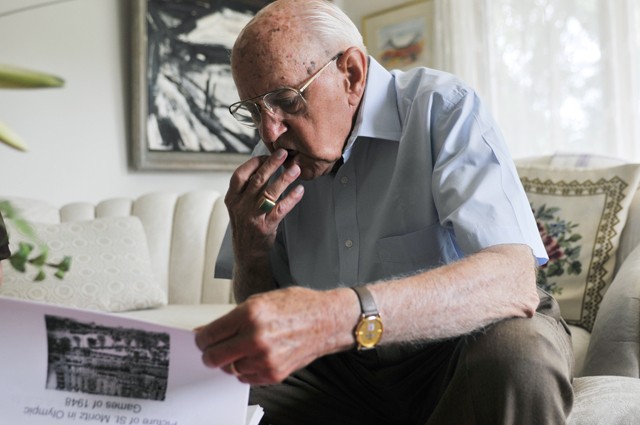 Even though Dr. V. George Nagobads jokes that he came to America âÄúon accident,âÄù his life with hockey made him an iconic part of one of AmericaâÄôs favorite sports folklores. The longtime former GophersâÄô team physician, most notable for his work with five U.S. Olympic teams including the 1980 âÄúMiracle on IceâÄù squad, was inducted into the U.S. Hockey Hall of Fame on Thursday. Affectionately known as the âÄúhockey docâÄù during his 34 years with Minnesota, Nagobads will also be enshrined into the Gopher Hockey Hall of Fame on Sept. 9. âÄúItâÄôs unbelievable,âÄù Nagobads said. âÄúI donâÄôt have words enough to tell how proud and how happy I am to be able to be in these hockey halls of fame.âÄù Nagobads, 88, was born in Latvia and moved to Germany for school. It was there that he decided to come to America âÄúby accident.âÄù He was working in an X-ray van, touring the country in search of tuberculosis cases when he had lunch with a German professor and a reverend from Minnesota. The reverend convinced him that medical jobs were much more plentiful in the United States, and when his wife obliged they moved to Minnesota in June of 1951. By 1955, he had completed his surgical residency at the University of Minnesota and got a job with University Health Services. After spending two years there, UHS director Dr. Ruth Boynton âÄî whom the department was later renamed in honor of âÄî asked Nagobads to help with the hockey program, where he went on to work for 34 years and win three NCAA championships. The very next year, he met a young hockey player who would become a lifelong colleague and friend, Herb Brooks . There was strong mutual respect between the two, and Nagobads said that working with Brooks, who would go on to coach the Gophers and the âÄúMiracleâÄù team, was always âÄúdelightful.âÄù âÄúHerbie has been just like my son,âÄù Nagobads, who is 16 years older than Brooks, said. âÄúâÄ¦He was always thinking about how he would play and [what] would be the best way. ThatâÄôs why he was such a good coach for the University.âÄù The respect was mutual, and it was Brooks who came up the idea that Minnesota should name an annual âÄúUnsung Hero awardâÄù in honor of Dr. Nagobads. The award has been given since 1978, when the two were still working for the Gophers staff. Olympics It was only natural that when Brooks was named to coach the U.S. Olympic teams, he hired Nagobads to be his teamâÄôs physician because of their working relationship in Minnesota. He was a physician for five Olympic teams, including the 1968 team for which Brooks played and the 1980 team Brooks coached to a gold medal, as seen in the 2004 film âÄúMiracle.âÄù Nagobads said the Disney film, which won the 2004 ESPY award for best sports movie, was accurate save for a few Hollywood dramatizations. His one major problem was with the filmmakersâÄô portrayal of Brooks as an âÄúanimal,âÄù particularly in the scenes where he skated his players into the ground in conditioning. Nagobads said it was unfair that Brooks never got a chance to defend himself, as he died in 2003 prior to the filmâÄôs release. âÄúHerbie was a hard coach [to play for], but never mean,âÄù he said. âÄúHe would skate them hard, but never to the point of exhaustion.âÄù The 1980 victory over the Soviets, and the subsequent gold medal that followed the victory in the finals over Finland, are what Nagobads beholds as the fondest memories of his career. He contributed to the semi-final victory by ensuring that Brooks kept his players shifts shorter than 40 seconds in order to keep energized by the third period. âÄúI was there, but I didnâÄôt get to watch the game because I had to watch my stopwatch the whole time,âÄù he said. Nagobads also worked for 15 U.S. national teams, two Canada Cup teams, five U.S. national junior teams and the first-ever U.S. womenâÄôs national team. While medicine was always NagobadsâÄô first passion, hockey has been deeply rooted in him since childhood days of playing Bandy âÄî an old European game similar to ice hockey âÄî in his native Latvia. âÄúMost sports, when you start playing, they get in your blood,âÄù he said. âÄúBut hockey especially.âÄù