More than 30 people protested a bail hearing for Allen Scarsella, one of the men who shot into a crowd at the 4th Precinct last fall. 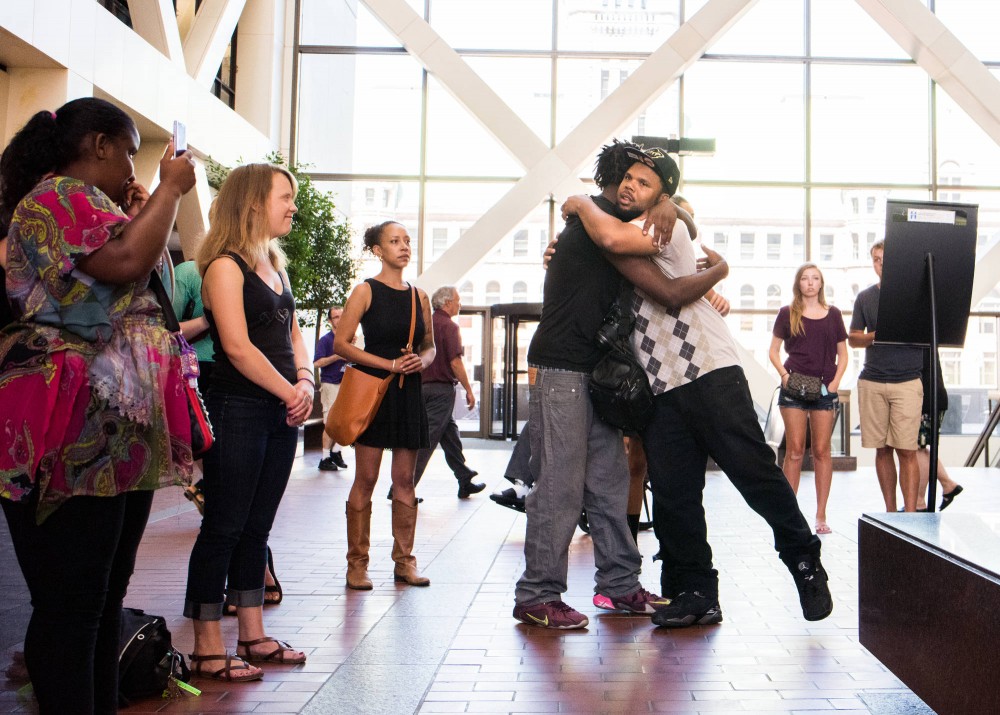 Devonne Mayweather, right, embraces Wesley Martin at the Hennepin County Government Center in Minneapolis on June 6. Black Lives Matter Minneapolis and other supporters joined Martin, who was shot by Allen "Lance" Scarsella last November during protests at the 4th Precinct, before attending the bail hearing for Scarsella.

Protesters attended a bail hearing Wednesday for Allen Scarsella, one of the men who shot five community members at a 4th Precinct protest, following the fatal police shooting of Jamar Clark.

Scarsella claimed self-defense in the shooting, which caused renewed protests at the Hennepin County Government Center.

Judges ultimately denied reduced bail because they said Scarsella poses a threat to the public.

During the protest, Wesley Martin, one of the shooting victims, said he didn’t want Scarsella to get a reduced bail, and feared a larger, mass shooting could occur if he was released.

“If [they reduce] his bail, I won’t understand … I would have so much pain in my body because there [were] grandmas, grandpas, uncles, children, moms, dads out there, and if us five could not stop them, there would’ve been another mass shooting like San Bernardino,” Martin said.

The defendant currently faces charges for assault and rioting with a dangerous weapon. But Martin said he thinks these charges are insufficient, and that Scarsella should be charged with attempted murder.

Michelle Gross, Communities United Against Police Brutality president, agreed with Martin, and said the premeditation of the attack should’ve resulted in an attempted murder charge, instead.

“I wanted to show up to make sure that people that do things like this, that show up to peaceful protests with guns … and put it on the internet, quoting Batman movies, and then expect to get off and say it was self-defense, it wasn’t self-defense,” Johnson said.

Organizer Michaela Day, who was at the 4th precinct an hour after the shooting said she also thinks there should be no self-defense claim, since the shooters took a video of themselves on the way to the protest and posted it on social media.

“I think it’s completely bogus,” Day said. “There should be absolutely no way that he should be allowed to get away with a self-defense claim, when they posted numerous times and numerous days the intentions to go stir things up.”

During the hearing, the defendant’s lawyers argued against the bail set at $500,000, and said Scarsella should have a reasonable bail because he had no history of behavioral problems before the shooting.

But Prosecutor Judith Hawley asked the judge to decline the bail request, because she said Scarsella is dangerous to the public.

Ultimately, Judge Hilary Caligiuri determined the $500,000 bail was appropriate to address these risks, and denied the motion.

“I think it was the correct decision,” Gross said. “I think that Mr. Scarsella is clearly a danger to the community, I think he belongs in prison, or in jail at this time, and he should stay in jail … pending the trial.”

Gross said the protest’s turnout helps show the state that people are invested in this case.

“It’s important for the state to understand that there’s a lot of people in the community that are invested in this … decision, and are going to be watching the courts very closely to make sure that some measure of justice happens,” she said.