The highs and lows of “Wuthering Heights” 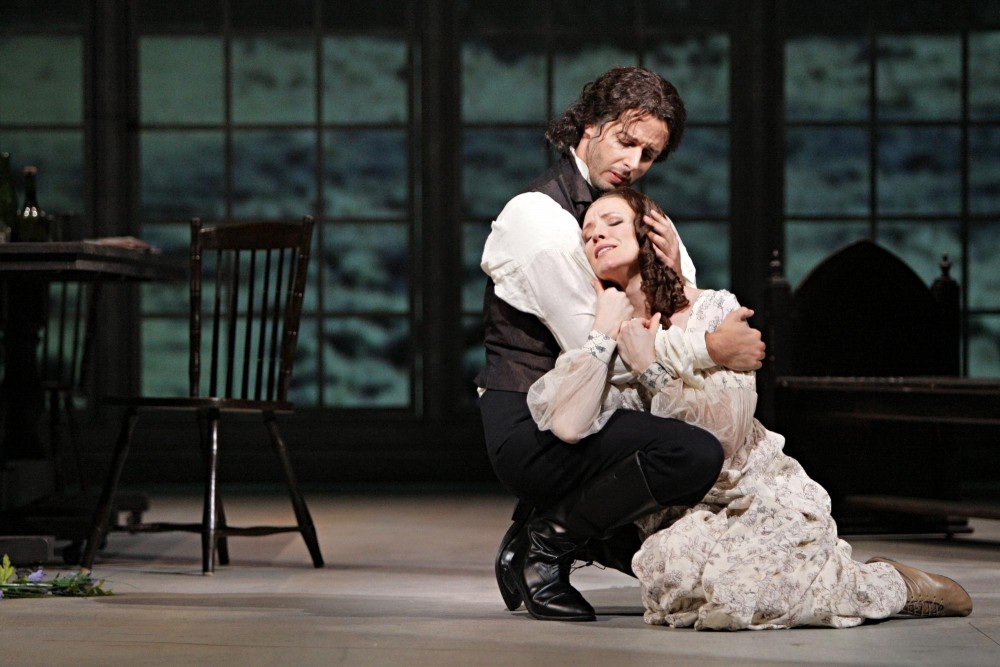 Lee Poulis as Heathcliffe an Sara Jakubiak as Catherine emote as much Bernard Herrmann's work will allow.

âÄúWuthering HeightsâÄù can be a hard pill to swallow for modern audiences. Emily BrontÃ«âÄôs sweeping gothic novel carries a heavy melodramatic punch that has softened since mid-19th-century publication.

The storyâÄôs star-crossed lovers, the upper-crust Catherine and the orphaned Heathcliff, seem to be less imprisoned by their Victorian conventions and more so by their adolescent naivety. However, the Minnesota OperaâÄôs production of composer Bernard HerrmannâÄôs stage adaptation, which has been produced only one time prior, is luckily one that plays to the storyâÄôs timeless assets, or at least tries to.

The emotional vigor of âÄúWuthering HeightsâÄù always rested in BrontÃ«âÄôs melding of youthful passion with the romanticized landscape of her northern England setting.

Herrmann, the Academy Award-winning composer who scored Alfred HitchcockâÄôs âÄúPsycho,âÄù crafted a score appropriately teeming with expressionism âÄî a means of enhancing the performanceâÄôs many moments of anguish and ecstasy.

To accentuate the misery of an English winter or the otherworldly bliss of the oft-metioned moors in springtime, the production includes a screen projection fronting, which drops down during the interludes.

The screen is filled with seasonal imagery while the cast performs behind in varied levels of clarity. The result is powerful. When Heathcliff, played by baritone Lee Poulis, throws open the estateâÄôs snow covered doors in a fit of madness, it feels like an actual burst of cold air is on the way.

While the grandiosity of the score and stage appropriately matches its subject matter, Lucille FletcherâÄôs libretto slightly dampens the emotional highs and lows of the performance.

Although many of the verses during the fits of despair are brutally passionate, the more obligatory dialogue feels exactly like that âÄî an obligation. With a vast collection of crescendos and bursts of high notes, the charactersâÄô boiling points are often never realized.

HermannâÄôs penchant for high-tension scores seems to have suit him for such an interpretation, but there are only only fragments of catharsis here.

However, it comes at no fault of the performers. PoulisâÄô Heathcliff, while restrained in the first few acts, takes an engrossing descent into madness. Ben Wager, singing bass, stole most of the final act with his brutishly drunk Hindley. It is too bad their long notes couldnâÄôt stretch further since the orchestra tended to abandon any bursts of emotion before their peak.

The cast and orchestra admirably attempt to stir up a similar form of emotional fervor that BrontÃ«âÄôs original work initially carried. But the work just has too many built-in flaws.

HermannâÄôs limited approach to a more demanding medium undercuts a tragedy that it should intensify. There is no doubt that âÄúWuthering HeightsâÄù could benefit from reinterpretation, but HermannâÄôs limited ear shows that he wasnâÄôt the man to do it.