One proposal in Marcy-Holmes contradicts the area’s guidelines, but the choice sits with the City Council. 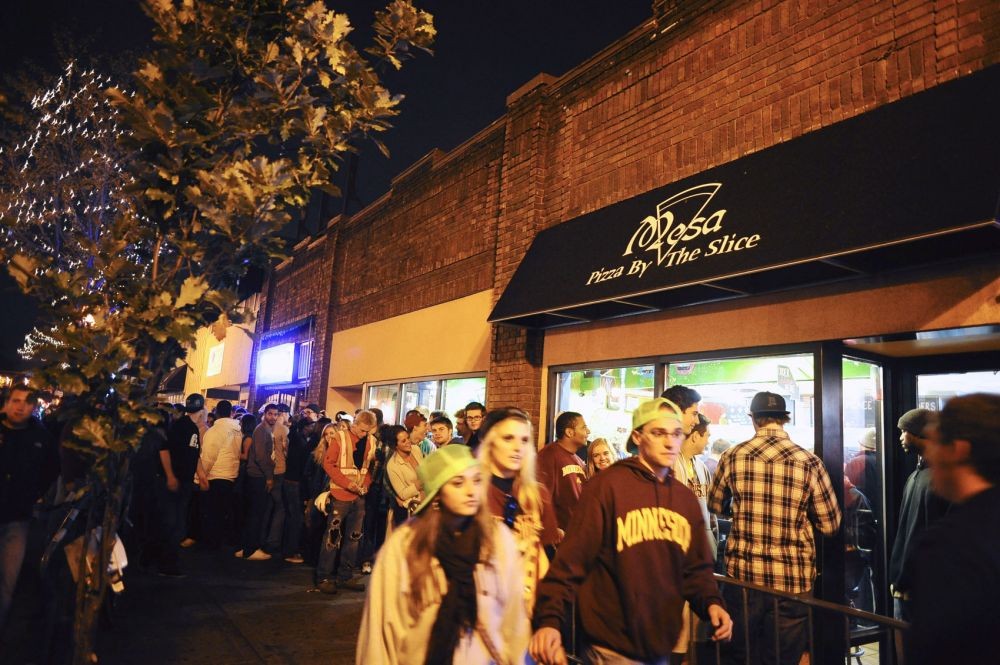 Late-night crowds line up for a slice of Mesa Pizza during homecoming weekend Oct. 14, 2012, in Dinkytown.

A proposed apartment in Dinkytown that would break ground in the spring has neighborhood residents questioning the city’s approval process for similar projects.

Area residents met at the University Lutheran Church of Hope Tuesday to discuss the concerns over the proposal — a proposal that some attendees say interferes with the Marcy-Holmes Master Plan. The plan to build a 16-story mixed-use building has raised broader questions over how much authority neighborhood organizations have in city planning.

Marcy-Holmes Neighborhood Association’s Master Plan, a 2014 City Council-approved guide for the neighborhood, outlines the rules for development within the community.

CPM Companies’ Dinkytown apartment proposal is still a vague idea, Frey said, so he hasn’t received much input on it yet.

He said the proposal has to go through the neighborhood organization — including its Land Use Committee — before facing the Historic Preservation Commission and later the City Council.

Input from the neighborhood is important to the city and can influence the council’s decision, but ultimately, he said, the neighborhood organizations have no legally-binding authority. “It’s certainly weighted input.”

“One of the significant things about the small area plan is that it is created out of the input of literally hundreds of citizens,” Eide-Tollefson said. “It should have some standing.”

She said the master plan should be a primary consideration for city officials and developers in the area.

Eide-Tollefson said it is critical that developers, including CPM Developer Daniel Oberpriller, review the master plan and historic district guidelines.

“I think that it’s really important for the Land Use Committee and the neighborhood board not to let this slide into a negotiation,” Eide-Tollefson said. “To clearly state how it does not meet the requirements and the vision of the master plan.”

“When I look at these renderings … it’s such a blunt instrument that you’re using,” Russell said.

City planner Joe Bernard said the city reviews the small area and other plans when it considers a project.

Bernard said the city does long-range planning for every piece of property to find its appropriate use.

Some developers choose to work with neighborhoods, he said, but ultimately the neighborhood organization opinions are only advisory.

But Oberpriller said he values input from the community. He said he thinks the 16-story building will be taller than the Chateau, the area’s current tallest building.

Oberpriller said the building will target older students and young professionals, not underclassmen.

Many at the meeting voiced concerns that the building could change the character of the historic business district.

“I’m on the Heritage [Preservation Commission] and this is … totally what’s outside of the rules,” said Land Use Committee member Dick Kavaney at the meeting.

MHNA Board and Land Use Committee Member Barbara Camm said the zoning change needed to build the property would permanently change the dynamic of the neighborhood.

Camm said “something changes” every time a new building is built in the area, making broad changes a gradual process.

Oberpriller said CPM is just reacting to the market and demand for more housing in Dinkytown. He said if this proposal doesn’t go through, another developer will make a similar proposal.

Still, the wide majority of comments from residents addressed the project’s massive scale, calling the building “overwhelming,” and suggesting alternate locations for it.

“If this turns out to be a huge fight, I’m not coming,” Oberpriller said at the meeting.