The annual College of Science and Engineering week is a chance to court future students. 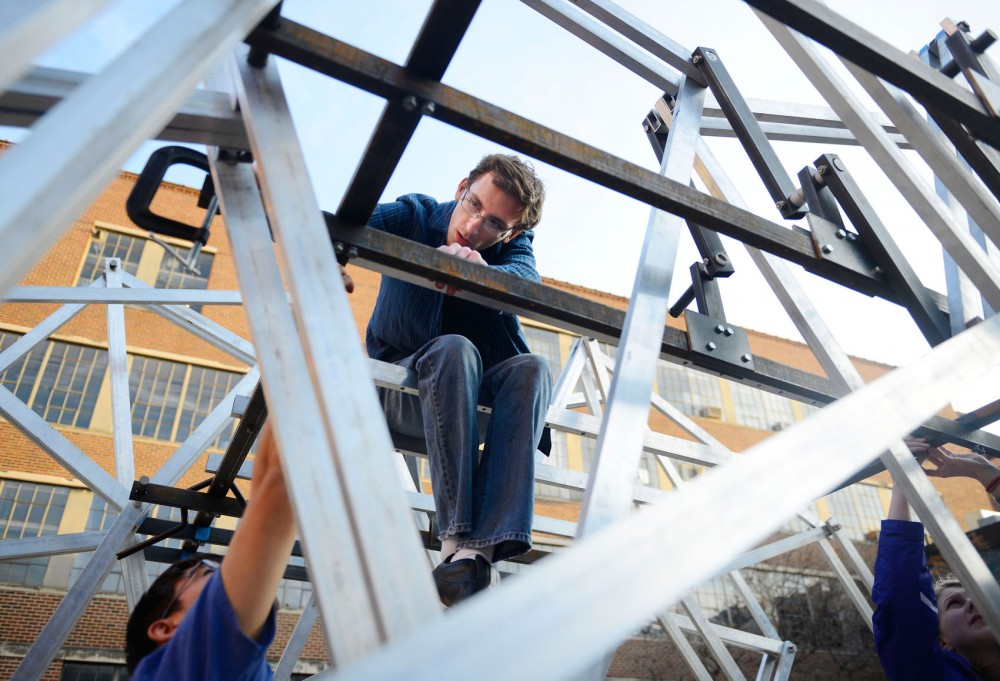 Mechanical engineering freshman Micah Lindstrom works on "Strand Beast," a pedal-powered giant mechanical moving sculpture, outside Rapson Hall on Friday. "Strand Beast" will be featured at the University of Minnesota College of Science and Engineering Expo on Friday, April 25, as part of CSE week.

A disc saw screamed in the basement of Keller Hall, spraying a fine mist of wood shavings into the air. The freshly cut board was made to complete the paneling on a homemade arcade game, complete with four controllers for multiplayer mode.

A few feet away, physics freshman Mitchell Paull adjusted the decibel levels of his speakers, which then sprayed mineral oil almost a foot into the air and onto the lab table.

“It’s going to take some adjustments,” he said, laughing nervously.

Both projects will be on display Friday for the College of Science and Engineering Expo as part of the annual CSE Week.

For 100 years, the University of Minnesota has thrown a weeklong celebration dedicated to science and engineering. This year, the Expo is the featured attraction. On April 25, more than 2,000 Twin Cities middle school students will visit campus for a day of about 50 outdoor science experiments and presentations from CSE student organizations.

The event aims to encourage students at a young age to start thinking about science in an engaging and meaningful way, said CSE Assistant Dean for Undergraduate Programs Susan Kubitschek.

If outreach for scientific engagement isn’t done until high school, she said, it’s often too late. It’s common for those who choose science as a career path to have parents who were scientists or engineers, she said.

“Students make major decisions in their life in middle school,” she said. “By the time you’re in ninth grade, you’re already making those commitments in what kind of classes you’ll be taking.”

Events like the CSE Expo help level the playing field, Kubitschek said, showing a broad range of science professions to students who may not have had much exposure to those fields.

Not all middle school students will respond to the same things, said physics junior and CSE Expo student group President Ben Ihde, so the Expo aims to showcase different areas of science in order to change the limited perception some students may have of it.

“It’s not just going into a lab and playing with test tubes,” he said. “It’s flying hovercrafts, playing with robots, building a model of a building and seeing how it stands up to an earthquake … you can do with it whatever you want to.”

The Expo also gives CSE students a chance to take skills and knowledge they learned in class and use them in a real scenario with real problems, he said.

“Lab work is predefined,” he said. “You go in, you read the instructions, you use all the ingredients that are set out for you and you get a result that you could predict beforehand.”

Applying those lab skills to real-world projects is much more fluid, he said, and students have to figure out how to do science on a team while dealing with limited budgets and unforeseen problems.

Working on the Expo project was completely different from working in class labs, Paull said. Not having an instructor to offer guidance and maintain motivation was “a real wake-up call,” he said.

Paull joined graphic design senior Matthew McVeigh last fall to create Project Vulcan, which they will show at the Expo. The visual effects machine explores how sound waves travel through different types of material, such as mineral oil, salt and ferrofluid, a liquid that responds to magnetic fields. The materials react differently when music plays through them, and the patterns then project onto a screen.

McVeigh said they didn’t anticipate how complicated the logistics of the project would be. He said he thought they could finish the project in six weeks, but they had to keep the budget low, wait for materials and find people who knew more about the subject than they did, which made the endeavor take much longer.

Other Expo projects include a waterproofing spray for protecting personal devices, a two-passenger hovercraft, a Formula 1 racecar and a quartet of singing robot head replicas of University President Eric Kaler.

Statistics sophomore Mia Bronstein is in charge of the event’s logistics. She said she’s excited to see the Strandbeest, an 11-foot-tall pedal-powered walking machine.

She’s been putting the event together since last October, she said, so she’s excited to see the middle school students arrive and all her hard work pay off.

McVeigh said the event is a great opportunity for college students who need more real-world experience but that it’s also a way for the University to recruit future scientists.

“It’s a way for kids to be inspired by science,” he said. “The way science is taught in schools is very uninspiring. If it was taught like this, I would have loved it.”