Graduate students draft their own bill of rights

Like other schools nationwide, COGs members are hoping to set formal standards for graduate students. 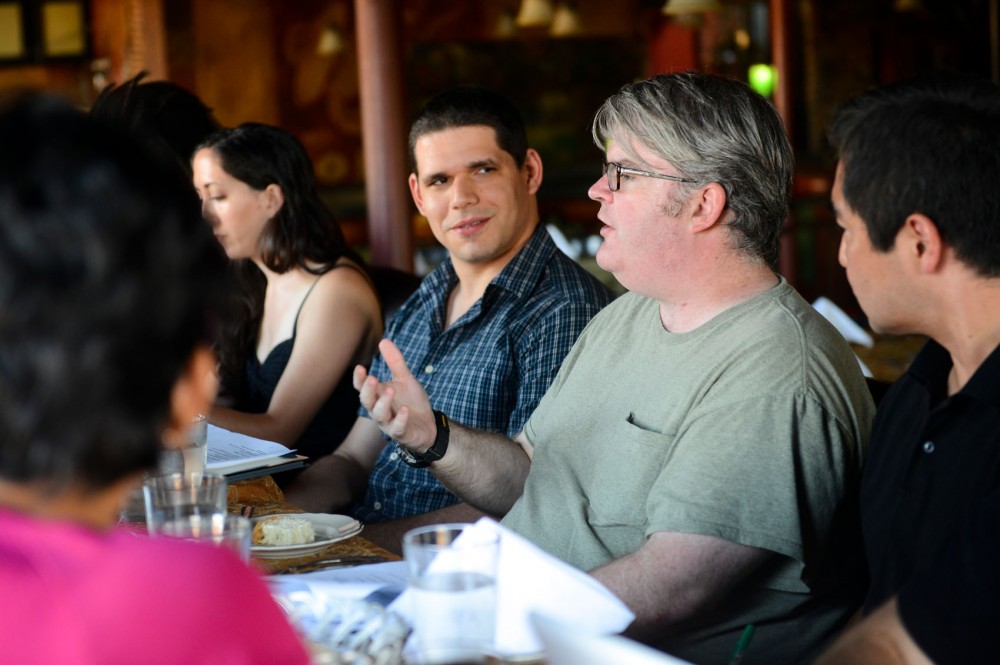 Council of Graduate Students member Scott Petty talks at the COGS meeting at Loring Pasta Bar on Tuesday July 22. Petty is one of four authoring the bill of rights for graduate students.

Following the lead of graduate schools nationwide, The Council of Graduate Students is drafting a formal list of rights they believe graduate students should have while attending the University of Minnesota.

A small group of COGS members is drafting a bill of rights to outline graduate students’ role within the school. They’re working on writing the guidelines this summer, and they plan to introduce the document to the student body this fall.

The bill of rights currently includes graduate students’ rights for recognition as co-authors of any research they have invested a “fair amount of work” into and for their department or program to clearly lay out any costs associated with attendance before they enroll at the University.

“This is where we’re setting the bar. We expect at least the bar to be reached, if not surpassed,” said Nicole Scott, COGS’ graduate education council representative.

Members plan to add more guidelines to the document, and they’re in the early stages of the drafting process.

The document will establish a set of standards for graduate students, which she said will help them deal with advisor-advisee relationships and academic freedom issues.

“If things aren’t going as well as they should … then [students] can say, ‘I’m not happy, these are what my expectations are and this is how you’re not meeting them,’” Scott said.

Scott said COGS plans to hold graduate student focus groups in the fall to gather feedback on the working document. The group hopes to present it to University administration by the end of the school year.

Because graduate students play so many different roles at the University, Scott said, COGS is considering all of their individual needs and rights as they create the draft.

Acting Vice Provost and Dean of Graduate Education Sally Kohlstedt said she hasn’t seen the working document but would support it if it outlined current policies at the University.

Even though they may sometimes be difficult to find, many departments and programs at the University already have guidelines and support available for graduate education, she said.

“If the goal is to highlight what’s in policy and what’s in practice around the University — that seems to me to be something very helpful for students to have,” Kohlstedt said.

At the University of Texas-Austin, a group of graduate students is currently completing its own bill of rights draft. The students are hoping the school’s Board of Regents will ratify it next spring, said David Villarreal, president of the university’s Graduate Student Assembly.

His group’s text, which they started drafting last year, includes a right to compensation to meet the standard of a living wage. It also includes the right to be treated as professionals and junior colleagues — a standard shared by COGS’ working draft.

While administrators at the University of Texas-Austin weren’t very supportive, he said, faculty members helped ignite the effort, giving the students the push they needed. In the coming months, GSA members will seek endorsements from departments and reach out to alumni for support.

COGS will also likely ask for support from more students, staff and faculty at the University when the school year starts up, Scott said.

“What we’re hoping to do with this … is to just have it as an agreement,” Scott said. “We want the University to recognize it, but it’s more of just laying out the standards.”