The Nittany Lions held the ball for more than two thirds of the game. 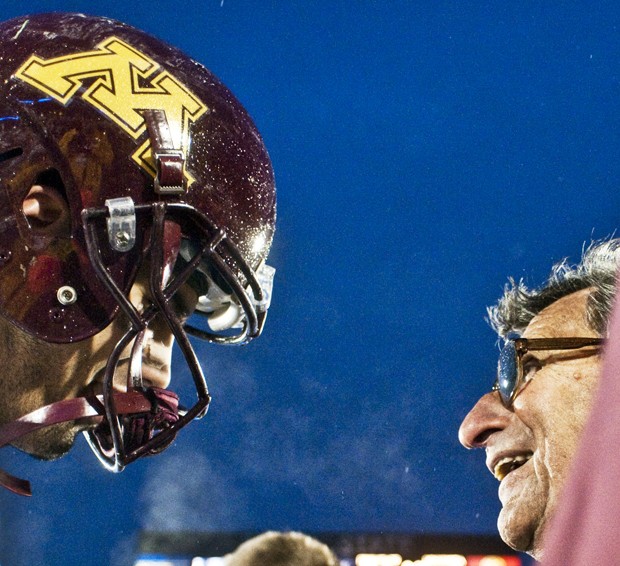 A recipe for football disaster: One part offense that gains 138 yards and seven first downs and holds the ball for less than 20 minutes. One part defense that allows 464 yards and 21 first downs and stops the opposing offense just six times on third down. The final product: a 20-0 loss to No. 14 Penn State at Beaver Stadium on a wintry mid-October afternoon. âÄúGive credit where credit is due,âÄù Minnesota head coach Tim Brewster said. âÄúPenn State was better than we were.âÄù Perhaps the only consolation after Saturday is that the ways in which the Gophers (4-3 overall, 2-2 Big Ten) must improve next week before facing Ohio State are quite obvious. On defense, itâÄôs about getting off the field. Minnesota did well early to keep the Nittany Lions (6-1, 2-1) out of the end zone but allowed too many third down conversions; against a team like Penn State, extra downs inevitably lead to points. The Nittany Lions converted 11-of-17 third downs, six of which were longer than 6 yards . With the GophersâÄô offense going nowhere, Penn State kept a stranglehold on the game. The Nittany Lions held the ball for a remarkable 42 minutes and ran 75 plays on offense, as opposed to MinnesotaâÄôs 40 plays. âÄúThatâÄôs been our downfall this whole season,âÄù junior safety Kyle Theret said of allowing opponents to convert third downs. âÄúWe have to learn to improve it.âÄù At halftime, Penn State had 11 first downs to the GophersâÄô two âÄî one of which was thanks to a penalty âÄî and 259 yards of offense to MinnesotaâÄôs 38. And yet, the Nittany Lions only led 13-0 after a late second quarter touchdown. On the scoring drive, two passes, including quarterback Daryll ClarkâÄôs 12-yard touchdown to receiver Derek Moye, were originally ruled incomplete but overturned on review . Not that the Gophers wanted to go into the half, but a two possession game is manageable. âÄúIt was deflating, but I think weâÄôre a pretty resilient team,âÄù said senior linebacker Lee Campbell, who led Minnesota with 13 tackles . âÄúWe thought we had a chance to come back and try to win it in the second half.âÄù But the GophersâÄô offense never got going. If the defense has one thing to work on, the offense has several. Their lone sustained drive, a 75-yarder late in the third quarter, ended with freshman running back Kevin Whaley being stuffed on fourth-and-goal from the 1-yard line . MinnesotaâÄôs next longest drive was 24 yards. Not until the third quarter did the Gophers gain yardage on the first play of a drive . âÄúIt kills you,âÄù junior quarterback Adam Weber said. âÄúYou get behind the chains against a great defense, youâÄôre hurting yourself. TheyâÄôll give you some completions but itâÄôs only for 5 or 6 yards and then youâÄôre fighting for those extra yards to get the first down.âÄù Weber went 10-of-22 for 101 yards and an interception. The running game provided no support, gaining just 37 yards. Weber was sacked only once but felt pressure throughout the game and, as has been the case many times in 2009, never looked entirely comfortable in the pocket. âÄúHe needs help,âÄù Brewster said. âÄúWhen he gets help, the stats show up big in his favor. I donâÄôt have anything to not feel good about Adam WeberâÄôs performance. Shoot, I thought he was like Houdini a few times in the second half getting out of sacks and staying poised and throwing the football and getting first downs.âÄù Senior wide receiver Eric Decker was quiet for the second straight game, catching just one pass, albeit a big one for 42 yards. Decker was consistently double-teamed and focused on in zone coverage, making it difficult for Weber to find his favorite target and biggest offensive threat. Teams know that slowing Decker means slowing MinnesotaâÄôs offense and theyâÄôre beginning to have success against him. The Gophers obviously want to continue going to their playmaker, but they must find other playmakers as well. âÄúThatâÄôs what Eric Decker is going to see,âÄù Brewster said. âÄúWeâÄôve got to make some plays in other areas.âÄù