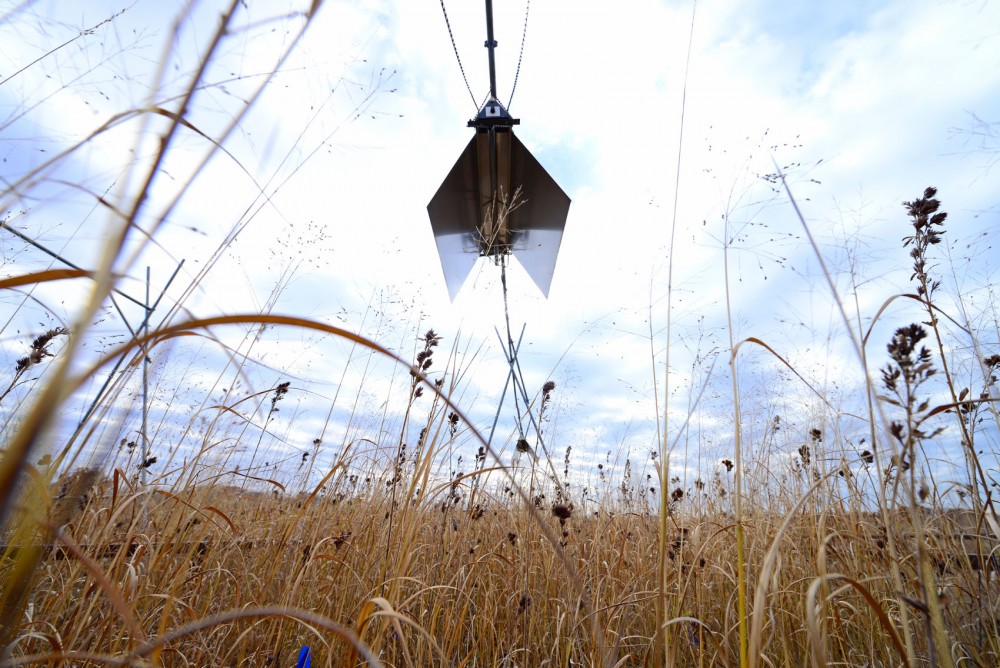 Heat lamps used to simulate climate warming hang over segmented plots of varying plant diversity at the site of the Biodiversity and Climate (BAC) experiment in Cedar Creek Biosphere Reserve on Monday afternoon.

Jackie Renzetti
Increasing plant diversity might play a key role in combatting climate change, according to a new study conducted in part at the University of Minnesota.
Published earlier this month in the science journal, “Nature,” the study looked at 46 grasslands across North America and Europe, including areas in Minnesota. Researchers found that highly diverse grasslands — those with 16 to 32 unique plant species — had more stable ecosystems over time than less diverse grasslands.
Still, scientists are unsure whether increased biodiversity could protect grasslands from extreme weather.
Researchers planted experimental grasslands in conditions ranging from extremely wet to extremely dry and found an ecosystem’s productivity, measured by the weight of all the plants in a given area, decreased during drier years and increased during wetter years, said Forest Isbell, principal investigator and University Cedar Creek Ecosystem Science Reserve associate program director.
Though both highly and minimally diverse grasslands changed in productivity, the study showed high diversity led to 25 percent more stability in grasslands.
The findings suggest that highly diverse ecosystems are more productive than minimally diverse ones.
“This greater productivity in diverse ecosystems slows down climate change by pulling the greenhouse gases out of the atmosphere and storing them in the plants,” Isbell said.
Increasing the number of unique plant species could, however, up an ecosystem’s resistance to extreme weather, he said.
“If we have already lost grassland plant diversity in some of these grasslands, our results suggest that if we added back that plant diversity, we could restore it in those ecosystems,” Isbell said.
Lindsey Sloat, a postdoctoral research associate with the University’s Institute on the Environment Global Landscapes Initiative, said the findings are relevant at a time when the rate of human-driven land use is rising.
“The biggest threat to biodiversity is human-driven land use changes,” she said. “Most of the land use changes are because we’re developing those areas to accommodate people.”
Though researchers have been studying biodiversity for decades, better technology has led to a greater access to data, Sloat said.
The Minnesota Cedar Creek Ecosystem Science Reserve has been studying biodiversity since the 1990s, said Minnesota Department of Natural Resources Prairie Team Supervisor Greg Hoch.
A 1994 study  led by University ecology, evolution and behavior professor David Tillman found plants in high-diversity grasslands were more resistant to a major drought than those in low-diversity grasslands.
Still, subsequent studies that manipulated biodiversity experimentally — like the one conducted by Isbell and his collaborators — found mixed results on whether biodiversity actually protects ecosystems from climate extremes.
Now, Isbell said he plans to study how biodiversity promotes resistance.
“The specific mechanisms that underlie these relationships are not yet clear,” Isbell said.
Ryan Faircloth contributed to this report.
Delete Image
Align Left
Align Center
Align Right
Align Left
Align Center
Delete Heading