Gagnon and Kramer are both seniors who are majoring in aerospace engineering. 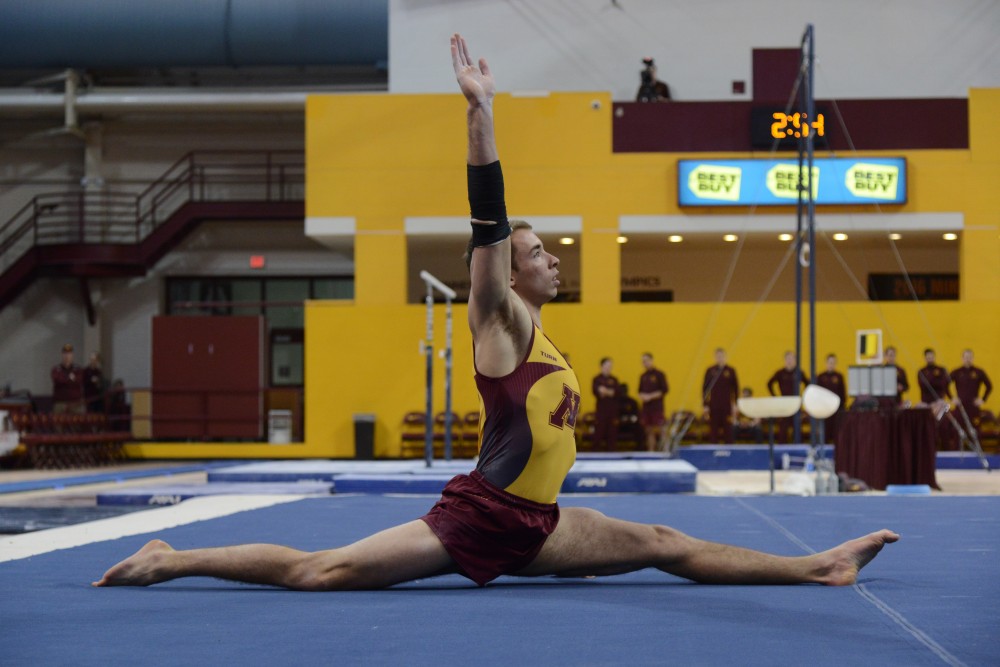 Joel Gagnon competes on the floor during the Gophers' meet against the Air Force on Jan. 21, 2017.

When senior Joel Gagnon was in middle school, he did a research project on Canadian astronaut Steve MacLean.

Gagnon said that research project inspired him to choose aerospace engineering as his major in college. Like Gagnon, MacLean was also a gymnast.

“I’ve always wanted to push my limits,” Gagnon said. “I saw a little bit of myself in him because he’s a gymnast who made it big in the astronaut world.”

Senior Jack Kramer, Gagnon’s teammate, came to Minnesota more than three years ago and said he didn’t know what his major would be. He later chose to major in aerospace engineering as a sophomore.

Kramer said since choosing aerospace engineering, he spends a lot of time with Gagnon in class. The two are in their final season with Minnesota men’s gymnastics and the gymnasts have fun learning about the same subjects, Kramer said.

“Any time we’re analyzing something, we’ll get technical with it,” Kramer said. “We have all these inside jokes coming from our aerospace background we’ve developed together.”

Head coach Mike Burns said Gagnon and Kramer are analytical thinkers, which helps in the gym.

During the 2016-17 academic year, Minnesota’s aerospace engineering program awarded 94 degrees. 70 of these degrees were bachelor’s degrees and 24 were master’s or Ph.D. degrees.

Kramer said he and Gagnon bring science into everything in their lives. The two even try to help improve their teammates’ performance through science.

“We always analyze things from a physics or mechanics [perspective],” Kramer said. “Whenever I bring science into it, [my teammates] all roll their eyes because I overanalyze everything. I have to be a nerd.”

Gagnon said he has learned valuable skills through his major. The senior, along with Kramer, earned academic All-Big Ten honors last season.

“No matter where I go from here, I’ll have a solid foundation that will help me in any career,” Gagnon said. “I’m taking a class right now about spacecraft dynamics. It’s fascinating to learn about that.”

Kramer said he will miss his fellow aerospace engineering major once they both graduate this spring.