He’s caught the eye of those who can’t fully support Romney or Obama. 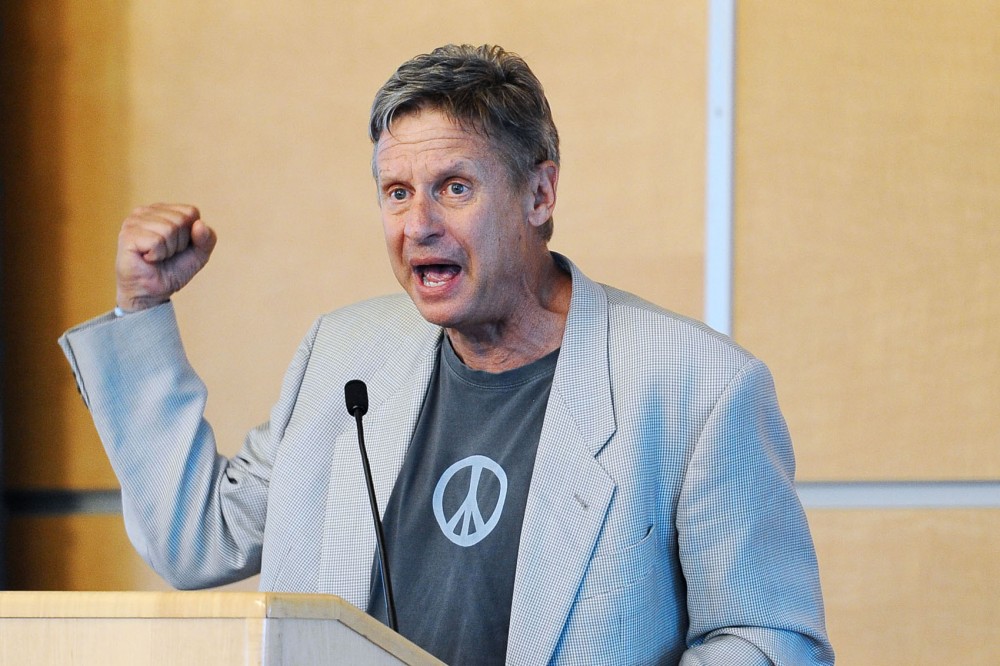 Wearing a peace sign T-shirt and a gray blazer, Libertarian presidential candidate Gary Johnson spoke to a half-filled ballroom at Macalester College on Friday about foreign policy, the economy and legalizing marijuana.

Johnson was a two-term Republican governor of New Mexico and initially ran in the presidential primaries as a Republican. He said banging his head against a wall within the Republican Party left “a bunch of knots” in his head, so he became a Libertarian.

“This is coming out of the closet for me,” Johnson said.

He was preceded by former Minnesota Gov. Jesse Ventura decked in a tie-dye Jimi Hendrix T-shirt, gripping the edges of the podium and passionately condemning the two-party system.

Ventura, who ran as a Reform Party candidate in 1998, said it’s time to end the “two-party dictatorship.”

“Gov. Johnson’s no longer a Republican because Republicans are no longer moderate,” said Ventura, who called himself and Johnson “fiscally conservative and socially liberal.”

Johnson describes himself as an avid skier, adventurer and bicyclist, and he has reached four of the highest peaks on all seven continents, including Mount Everest.

Johnson said he will be on the ballot in all 50 states, though in three it’s still pending litigation.

An estimated 150 people came to watch Johnson, including a number of students.

“I’m just so tired of picking the lesser of two evils,” said Brandon Zeman, a Hamline University finance junior who said he will vote for Johnson.

For some Ron Paul supporters, Johnson offers an appealing alternative.

“He’s as close to Ron Paul as I can get,” said Zeman, who worked on Paul’s presidential campaign during the primaries.

Voting for a third-party candidate is often decried as “throwing away” your vote, but Ventura and Johnson both called for a different mindset.

“You’re wasting your vote if you’re voting for a Democrat or a Republican because you get the same government,” Ventura said.

Raymond Lee, a finance and international business senior at the University of Minnesota, said he’s still undecided but that a vote for Johnson wouldn’t be throwing his vote away.

“I think throwing away your vote is voting for someone who you don’t believe in,” Lee said.

Earlier this month, a CNN/ORC poll found Johnson is supported by 3 percent of likely voters.

“The more votes Gary gets, the more scare it’s going to put in the system,” Ventura said.

Nate Waldron, a pharmacology graduate student at the University, pointed out that Abraham Lincoln started off as a third-party candidate.

“Third parties are definitely important,” Waldron said. “They give another voice, and sometimes that voice gets so loud that it replaces one of these existing ones.”

Ventura also hinted at the possibility of running in 2016.

“Gov. Johnson’s blazing a path, and if we keep the momentum running, he will blaze the path for people to come after him — and that might be me,” Ventura said.

Johnson covered a broad spectrum of policy in his speech, touching on social issues, the military and economic structure.

Johnson said he would eliminate the Internal Revenue Service, repeal the Patriot Act and abolish the Federal Reserve (or at least audit it). He also said he wouldn’t have signed the National Defense Authorization Act, is in favor of competing currencies and would abolish the Department of Education.

During his time as governor, Johnson said he vetoed 750 bills and had “thousands” of line-item vetoes.

As for foreign policy, Johnson called for non-intervention and bringing the troops home from Afghanistan now.

“I call for vacating our embassies right now — why make ourselves a target in the Middle East?” Johnson said.

“We have become the symbol of everything that is wrong in the world.”

Both Ventura and Johnson spoke up on the issue of marriage, urging Minnesotans to vote “no” on the proposed amendment that would constitutionally ban same-sex marriage.

Johnson believes marriage equality is a constitutionally guaranteed right, and Ventura said the marriage amendment shouldn’t even be on the ballot.

“I’ve been married 37 years now,” Ventura said. “It doesn’t affect my marriage to my wife at all if two gay people want to make the same commitment.”

Johnson is also calling for the legalization of marijuana and an end to the “drug war.”

He referenced Colorado’s proposed amendment that would regulate marijuana like alcohol, saying he thinks it will pass.

“I think when Colorado legalizes marijuana and all of the sudden the planes are filled up with Minnesotans headed to Denver for the weekend to chill out,” Johnson said, “I think everybody’s going to catch on to this really quick, and it will be a rapid progression to rational drug policy in this country.”

At the end of his speech Johnson posed the question: “What if you all waste your vote and vote for me?”

Answering his own question, he predicted, “I’m the next president of the United States.”