Antonio Tillis spoke and fielded questions to the University community at a public forum on campus. 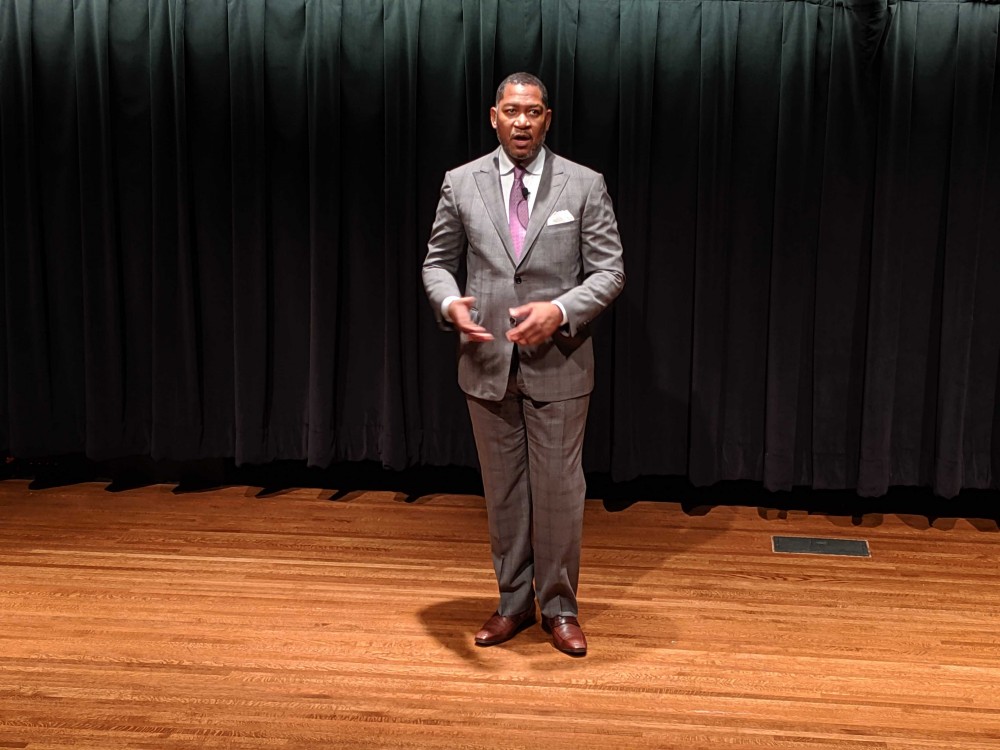 Antonio Tillis speaks at a public forum on Tuesday, Sept. 24.

Antonio Tillis, the first of four candidates vying to be the next University of Minnesota provost, talked of the importance of shared governance and diversity at a public forum on campus Tuesday.

The current dean at the University of Houston’s College of Liberal Arts and Social Sciences, Tillis spoke of his accomplishments in academia hoping to win over the sparsely filled auditorium in Northrop, mainly with University faculty and staff.

This was the first in a series of forums meant to introduce the candidates to the University community as they make their case to be the next executive vice president and provost, the second-most senior position in the system. The provost has a wide range of responsibilities, specifically focusing on the academic aspect of the University, including its research and educational aspirations.

The forums are the first time the broader University community is learning who could potentially be the next chief academic officer of the system.

The next provost will play a major role in crafting academic aspects of the next systemwide strategic plan, something University regents have been clamoring for since early last year. In his first year at Houston, Tillis created a strategic plan for his college, and pointed to that success as a reason to why he would be effective.

Paying homage to the brief tenure of former Gophers football coach Lou Holtz, Scott Petty, speaker of the Council of Graduate Students, questioned whether Tillis was in it for the long haul at the forum.

“I have a lot of thoughts of what I would like to implement, working with colleagues here, and that is going to take time,” Tillis said at the forum.

Hired at Houston just over two years ago, Tillis said that he did not go looking for this job, but couldn’t pass up the opportunity. Before Houston, he was at the University of Charleston for three years, according to his curriculum vitae.

Tillis spoke of creating a cultural climate where students can not only grow and achieve, but that they feel safe and welcomed. The topic of campus climate has been a focus for President Joan Gabel and sparked a lively discussion at July’s regents retreat.

He also spoke of promoting diversity with students, faculty and staff, but zoned in specifically on faculty. Addressing a question about how he wants to better retain diverse faculty when the University successfully recruits them, Tillis said “recruitment and retention are conjoined twins.”

“You don’t have the proverbial one and think that you have done your job, relative to diversity and recruitment,” Tillis said at the forum. “And then when that one person happens to leave, you don’t get the privilege of spinning the narrative [to] ‘well they just don’t stay.’ We can’t be comfortable with just our one.”

Tillis also address the values of shared governance, a virtue Gabel has also championed. He said Houston had a strong faculty senate that would call administration out and ask questions of them at meetings.

The forum was open to the public and was supposed to be streamed online, but a technical difficulty derailed that plan. Katie Stuckert, senior assistant to the University president, said it will be uploaded on the provost search website Wednesday morning.

Watching the recording of the forum will require a University login, an attempt to reduce the likelihood of other candidates participating in later forums gaining an advantage over those interviewing early in the process.

Should someone without a login want to view the forum, University spokesperson Jake Ricker said in an email to the Minnesota Daily, they can submit a Data Practices Act request and they will fill it “as quickly as if it were handled outside the [DPA] portal.”

Kriti Agarwal, president of COGS, who was on her way to a private discussion with Tillis and student leaders, said the forum was too short.

“I would have liked a chance to ask more questions,” Agarwal said.

Hana Ikramuddin contributed to this report.