For some blended families, deaf literacy vital for communication 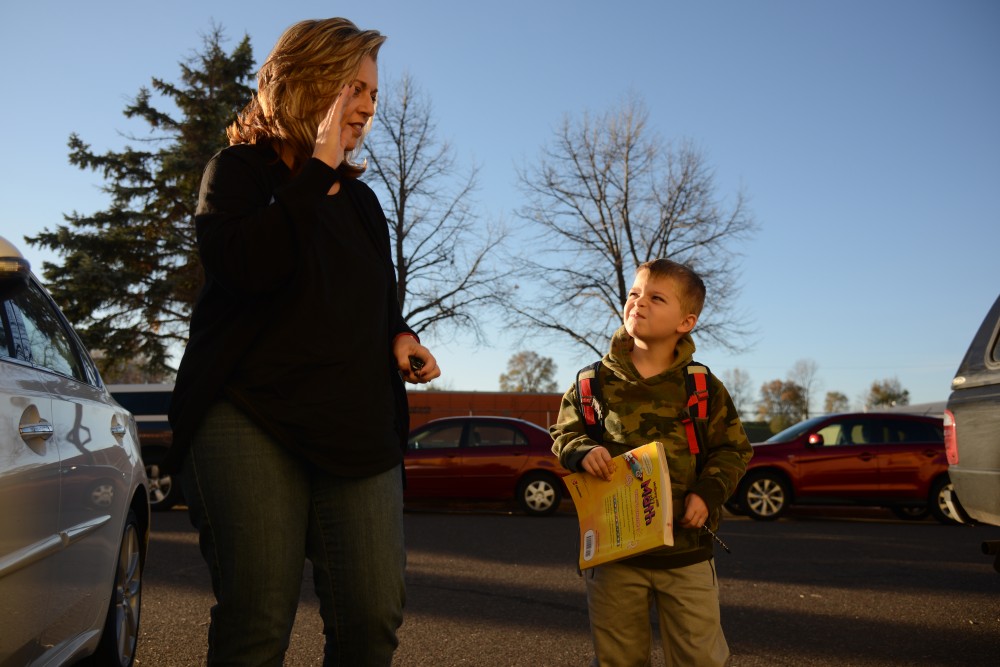 Amy Caslow signs to her son Asher Caslow, 6, while walking him into Metro Deaf School in St. Paul on Wednesday, Nov. 16, 2016.

Immediately after her son AJ was born, Amy Caslow was told he was deaf.

At the time, Caslow had no knowledge of sign language but now is almost fluent and has a degree in American Sign Language interpretation.

But this isn’t the case for many families. The majority of deaf children are born into hearing homes, she said, where no one knows a visual language — meaning they can’t communicate with each other.

Research shows that a lack of early access to visual language, like ASL, can limit literacy for the rest of a person’s life. That’s why University of Minnesota associate professor of deaf education Debbie Golos created a set of online resources in 2010 to help children and adults learn language visually.

Golos developed Peter’s Picture, a set of educational videos, to promote literacy in deaf preschoolers after she noticed a literacy gap among her students at the California School for the Deaf, where she used to teach.

She now needs funding to remake the videos with sound, so Peter’s Picture is a more effective learning tool for hearing kids as well.

The videos feature a group of deaf children who go on adventures and use a variety of strategies to teach viewers new words in both English and ASL.

“The deaf children who had deaf parents and had been exposed to ASL from birth were reading at or above grade level, and those who hadn’t had that exposure … were reading below grade level,” Golos said.

And a significant number of parents don’t sign fluently or at all, she said, which inhibits deaf children even more.

“There’s a critical period for learning language. If … any child doesn’t learn a fluent language in their early childhood years, then they’re going to struggle,” Golos said. “Some children never catch up fully.”

Golos said she became interested in researching this gap and facilitating literacy through visual language.

“A lot of that is taking ASL as a foundational language and using bilingual strategies … to help children connect ASL to written English,” she said.

And Peter’s Picture incorporates a number of these strategies to increase deaf children’s exposure to language.

“For example, we sign the word, then you finger-spell it, then you sign it again, and then you point to the English print,” Golos said.

University ASL Program Coordinator Jonathan Penny’s first language is ASL, and he said videos are an extremely effective way to teach the language.

“Whether the parents are skilled or not skilled [in ASL], it’s important to give children a way to learn ASL because ASL is their natural language, period,” he said. “Deaf requires visual language … and that’s it.”

Amy Caslow said she felt it was her responsibility as a parent to learn ASL when her son was identified as deaf at birth.

Although AJ can speak, ASL is an essential part of his life, Caslow said.

“He hears no high frequencies, only low frequencies,” she said. “Without the support of his [hearing] aids, he misses a lot of stuff, and he’s not going to have those on all the time.”

She recently graduated from Saint Paul College with a degree in ASL interpretation and now works with an agency that helps deaf people find work. She also teaches ASL classes for people with disabilities.

Caslow’s son attends Metro Deaf School (MDS) in St. Paul, and she estimates that the majority of the students there have limited or no communication with their parents, she said.

MDS Secretary Becky Swinney’s son, now 13, was identified as deaf at age 2. She decided to learn sign language so she could communicate with him.

“Parents that don’t sign, they can’t even ask how their [child’s] day was, and that’s a harsh reality,” Swinney said. “Social-emotional [well-being] is a huge part. I definitely see that, especially as my son is getting older, the gap is getting wider.”

Swinney has worked at MDS for seven years. She said the achievement gap there is noticeable.

“My son started out at Metro Deaf School at age 2 with no visual language. He didn’t sign at all, but now he is at the top of his class,” she said. “Part of that has to do with being able to communicate, being able to help him with his homework, being able to have a conversation.”

Research has shown Peter’s Picture to be highly effective in promoting literacy in children, but Golos said she would like to conduct additional studies to see how teachers can use media in the classroom and how parents and children can use the series at home.

ASL Program Coordinator Jonathan Penny said everyone — hearing and non-hearing — should learn one visual language and one spoken language.

Additionally, classrooms that are set up to facilitate visual learning lead to increased success for hearing and deaf students alike, Penny said. Educators should also incorporate visual captioning into classroom media, he said.

“All children, deaf, hard of hearing or hearing, can benefit [from] visual language and visual learning,” Golos said.