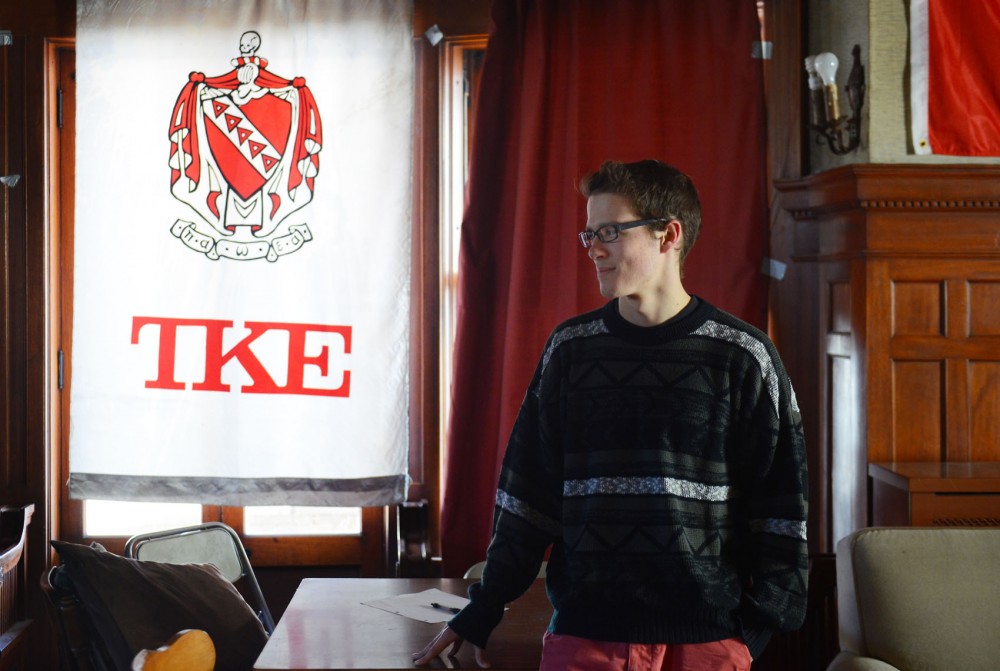 JD Braun never imagined himself joining a fraternity at the University of Minnesota.

But when one of his close friends joined the Tau Kappa Epsilon fraternity during their freshman year, Braun found a home on campus.

Braun, now a psychology junior, is gearing up to take on the role of president of the Interfraternity Council next month, making him head of the governing body of campus fraternity chapters. He plans to use this newfound authority to focus on safety and cohesion in the greek community.

Outgoing IFC President Cameron Schilling said Braun is a great fit for the role and anticipates him to be a successful president.

“He’s a very driven individual, he knows what his goals are and I think he knows very well how to achieve his goals,” he said. “I think he’ll do great things for the Interfraternity Council.”

Braun said he became interested in running for IFC president while serving as Greek Ambassador Coordinator for the organization, where he created a “best practices series.” In the series, Braun visited the most successful IFC chapters in areas such as recruitment and academics and then shared their strategies with the smaller, newer chapters on campus.

“I started working outside of the Greek Ambassadors, and I really wanted to make a change in the community through the different things that I was working on,” he said.

That initiative is in line with one of Braun’s main goals to continue helping small fraternities on campus develop.

But as IFC president, Braun said he plans to pay specific attention to safety within the greek community.

Ensuring all members are staying safe on the weekends and looking out for one another is essential, he said.

“I think the biggest thing I want to push is accountability,” he said. “Just watching out for people in different chapters … If you see someone in a dangerous situation, being able to have the confidence to step forward and step in and really take care of our entire community.”

He said his safety initiative fits in with his goals to better connect all four greek councils on campus.

Nick Lambert, president of the Theta Chi fraternity, said he hopes the IFC’s new president and executive board will direct more focus on streamlining the formal recruitment process.

The current process makes it hard for small, new fraternities like his to attract members, he said.

He said he also hopes that this year the IFC will work to collaborate more with fraternities hosting philanthropy or other types of events.

“There’s still … not a whole lot of collaboration between the individual chapters, and that’s something I’d like to see [the] IFC encourage more,” he said.

As conversations regarding campus sexual assault continue at the national level and campus level with an emphasis on greek communities, Braun said he plans to make the issue a priority.

He noted the IFC has a sexual assault prevention task force in place that works to educate its community on sexual assault and to raise awareness about the problem.

“We are definitely aware of the situation, and we’re trying to combat it,” Braun said.

Though he’s still transitioning out of the role as IFC president, Schilling said he’s excited to see where Braun will take the council in the next year.

“I’m really looking forward to handing things off to the next team and empowering the next individuals to carry on what we’ve created,” he said.