The trails stretch 3.5 miles near the University’s West Bank. 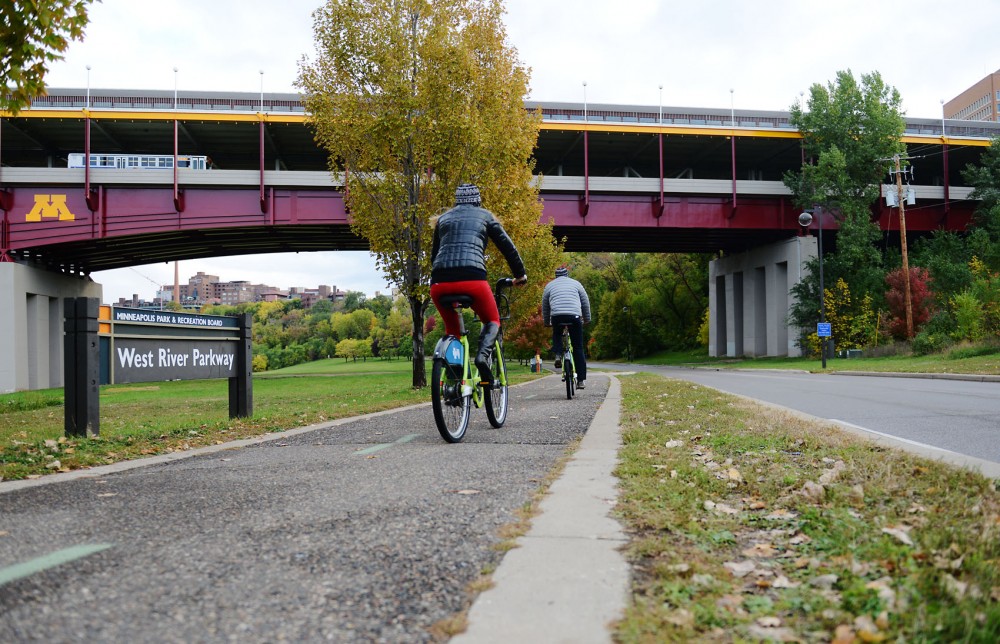 Bicyclists and pedestrians on the West River and James I. Rice parkways asked for trail resurfacing, and the City of Minneapolis listened.

The Park and Recreation Board received $1.8 million in federal funds to improve the trails, which stretch 3.5 miles along the West Bank from North Plymouth Avenue to Franklin Avenue. To decide how to spend the money, the board surveyed cyclists and pedestrians who used the trails this summer.

High on the list of suggestions was resurfacing portions of both trails, said Deborah Bartels, a board project manager.

She said the city hasn’t resurfaced parts of the trails, which run near the University of Minnesota’s West Bank campus, since they first opened in 1988.

“The trails along James I. Rice Parkway from [North Portland Avenue] are in pretty rough shape,” she said.

Bartels said asphalt lasts about 10 years in Minnesota before becoming rough and uneven, so the current paths are long overdue for repaving.

The portion of the trail north of Portland Avenue that runs from just north of the West Bank campus to downtown Minneapolis is of particular concern, she said.

“Unless you have a soft seat, it hurts,” he said.

The West Bank trails are “definitely” in the worst shape of any the board manages in the city, Murphy said, and are more frequently used than most.

The portion of the West River Trail that runs south of East Franklin Avenue was in a similar state before the city resurfaced it three years ago, he said.

Staff members went out and surveyed trail users in June, Bartels said, and also administered the survey online. The survey asked respondents to point out problem areas and suggest improvements for the trails.

In addition, the board convened an advisory committee earlier this fall to brainstorm a list of potential improvements for the trails.

Most survey respondents — about 74 percent — suggested improving the trail’s surface. Other suggestions included adding navigational signs, connections to other trails and improved lighting.

While the board wanted to be receptive to trail users’ suggestions, Bartels said, it had to dedicate a portion of the federal funds to routine federal requirements for pedestrian and bicycle trail improvements.

Dorian Grilley, Bicycle Alliance of Minnesota executive director, said many trails around Minneapolis are in good condition considering the scarcity of funds for their maintenance.

“The city and the Park and Recreation Board are doing a great job with what they have,” Grilley said.

Securing federal funds for trail upgrades is particularly impressive, he said, given that infrastructure budgets have been cut due to the recession.

Bartels said she expects that the board will finalize the design for the renovated trails in early 2014, with construction likely lasting into 2015.