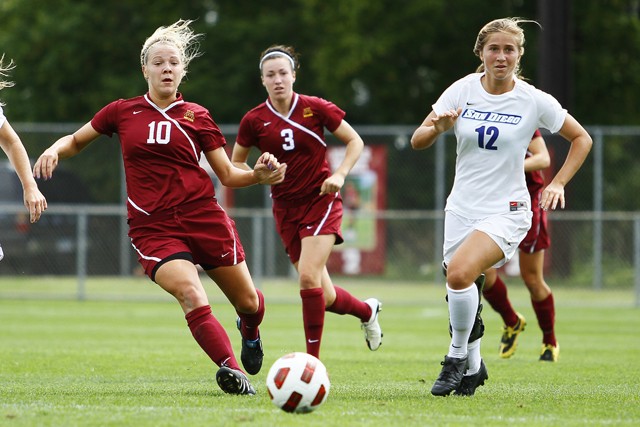 Pop quiz: Start with 10 games, put seven on the road and three against top-20 opponents, and what do you have? Answer: The Minnesota womenâÄôs soccer teamâÄôs non-conference schedule. It also happens to be a schedule the Gophers (6-1-1 overall) have run through with just one loss âÄî in overtime to then-No. 4 Notre Dame âÄî and a six-game win streak that included a 2-1 upset of then-No. 14 San Diego. Minnesota is unbeaten in its last seven entering the final weekend before Big Ten play, and will place that streak on the line Thursday in Columbia against No. 20 South Carolina. On Sunday, the Gophers return to Elizabeth Lyle Robbie Stadium at 1 p.m. for a final tune-up against Illinois State. South Carolina is coming off a historic 2009 in which it set school records for conference and overall victories, won the Southeastern Conference tournament for the first time in school history and finished the season ranked No. 9 in the country. In fact, South CarolinaâÄôs 2009 season nearly mirrored MinnesotaâÄôs 2008, as the Gamecocks matched the GophersâÄô run to the Sweet 16 in the NCAA Tournament. But the connection between the teams runs deeper. Minnesota senior midfielder Katie Bethke and South Carolina junior forward Kayla Grimsley trained together this summer with the U.S. Under-23 womenâÄôs national team prior to the Four Nations Cup in July. Both stars boast eight points this season; GrimsleyâÄôs two goals and four assists are both team highs. Grimsley, already one of the GamecocksâÄô most prodigious all-time players, creates most of her teamâÄôs chances, head coach Mikki Denney Wright said, and Minnesota will be keeping a watchful eye on the dangerous striker. The Gophers will be considered the underdog tonight, a billing that leading scorer Shari Eckstrom is okay with. âÄúI think weâÄôre underestimated,âÄù said the junior midfielder , who has four goals and an assist this season. âÄúPeople donâÄôt give us credit for what we can do. I actually like it.âÄù The Gophers have averaged more than two goals per game in 2010, although that number is slightly skewed thanks to a seven-goal showing against Belmont. Minnesota has been shut out twice, most recently Sunday in a 0-0 tie at Toledo. Meanwhile, the Gophers have shut out four of their last five opponents and have allowed just four goals all season. But Denney Wright is not satisfied. âÄúThey look like good numbers, but in all honesty, with our potential, I think we can be even better,âÄù she said. Should MinnesotaâÄôs ratio of goals-to-goals allowed improve from an already-impressive 17-4, itâÄôll almost surely move into the National Soccer Coaches Association of America Top 25. It was two points outside the top 25 in the most recent poll. âÄúGoing up against South Carolina will be a good test to see where we are as a team and what we need to work on going into conference play,âÄù Bethke said.