Gophers can’t hang on to halftime momentum against Northwestern 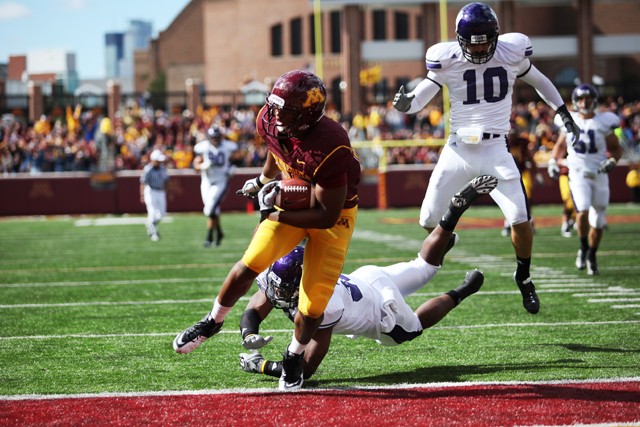 Wide Receiver Eric Lair scores a touchdown on a 25 yard catch in the gophers 29-28 loss against Northwestern on Saturday.

It was a feeling the Gophers hadnâÄôt had all season.

They headed into the locker room at halftime with momentum, confidence and the homecoming crowd on their side having just scored a late-half touchdown to take a 21-14 lead over undefeated Northwestern. It was the first time all year the Gophers had a lead at halftime, and it was the first time the Wildcats had trailed all season.

But instead of riding that wave of momentum, the Gophers (1-4) scored just one more touchdown in the second half and fell to the Wildcats (5-0) in heart-breaking fashion 29-28 on a late field goal in the Big Ten season opener.

After Northwestern kicked a field goal with just over two minutes left to take a one-point lead, the Gophers had a chance to win on their final drive. They drove from their own 38-yard line to NorthwesternâÄôs 40, where one more first down wouldâÄôve put them in field goal range. After a rush for a loss and two incomplete passes, quarterback Adam WeberâÄôs pass on fourth-and-11 bounced off the outstretched hand of tight end Eric Lair and was intercepted, sealing the game for Northwestern.

âÄúWe gave ourselves an opportunity,âÄù Weber said. âÄúItâÄôs just too bad that we werenâÄôt able to execute in that final critical moment of the game because that would have been a great way to cap off the game.âÄù

Northwestern struck early with a deep touchdown pass, but after the Gophers went three-and-out on the ensuing drive, Minnesota linebacker Aaron Hill came up with a fumble recovery to give the offense the ball in Northwestern territory. The Gophers capitalized on a 38-yard play-action pass to junior running back Duane Bennett.

The Wildcats answered with a touchdown of their own on the ensuing drive, but the Gophers failed to respond with a score, going three-and-out on the next drive. It looked as though the Wildcats were going to take an early two-possession lead as they drove deep into Minnesota territory midway through the first quarter, but linebacker Gary Tinsley forced Northwestern quarterback Dan Persa to fumble just a few yards from the GophersâÄô goal line.

The Gophers didnâÄôt let Northwestern score for the rest of the half after giving up two touchdowns in the first 12 minutes, giving the offense something to work with.

âÄúWe knew that we could bend, but not break,âÄù senior safety Kyle Theret said. âÄúOnce we settled down [and] we started to get our adjustments in, we started controlling the pace of the game rather than them. And once that happened, we just felt more comfortable.âÄù

The Gophers scored two more touchdowns before the end of the half, including a little trickery with a Bennett pass to Lair in the end zone, something Lair said the two have been practicing since fall camp.

Their final touchdown of the half came at the tail end of a quick drive that left just 59 seconds left on the clock.

But that halftime momentum was soon lost, as Northwestern drove down the field and punched in a short rushing touchdown on the opening drive of the second half. However, a missed extra point preserved a 21-20 Gophers lead.

The Gophers flexed their muscles with an 11-play 89-yard touchdown drive early in the fourth, capped off by a 25-yard touchdown pass to Lair, the only pass of the drive.

It was the first time the Gophers eclipsed 100 team rushing yards since their week-two loss to South Dakota.

âÄúI thought it was exactly where we wanted to be in the second half as far as being physical with them, playing our style of game with them,âÄù Minnesota head coach Tim Brewster said of the running game. âÄúObviously we were wearing them down, and that’s how we wanted to play.âÄù

But that touchdown would be the last points the Gophers put on the board Saturday.

It was a tough defeat for the Minnesota players to swallow, not only because it was their fourth home loss in a row, but because they had the lead late in the game.

âÄúEvery loss is tough,âÄù junior running back DeLeon Eskridge said. âÄúGoing into Big Ten play, we want to come out with victories âÄ¦ to lose by one is a huge disappointment.âÄù

Minnesota came into Saturday 0-0 in the Big Ten and with a chance to start their season anew. But as the reality that they are now three games below .500 sets in, the focus turns to No. 11 Wisconsin, a win that would do wonders for a team that is sliding fast.

âÄúAs much as we want to sit here and think about this game and think how we messed up this game, we got Wisconsin,âÄù Theret said. âÄúAnd nobody hates red and white more than us. So now it comes down to getting the axe.âÄù