Team U.S.A. too much for Gophers 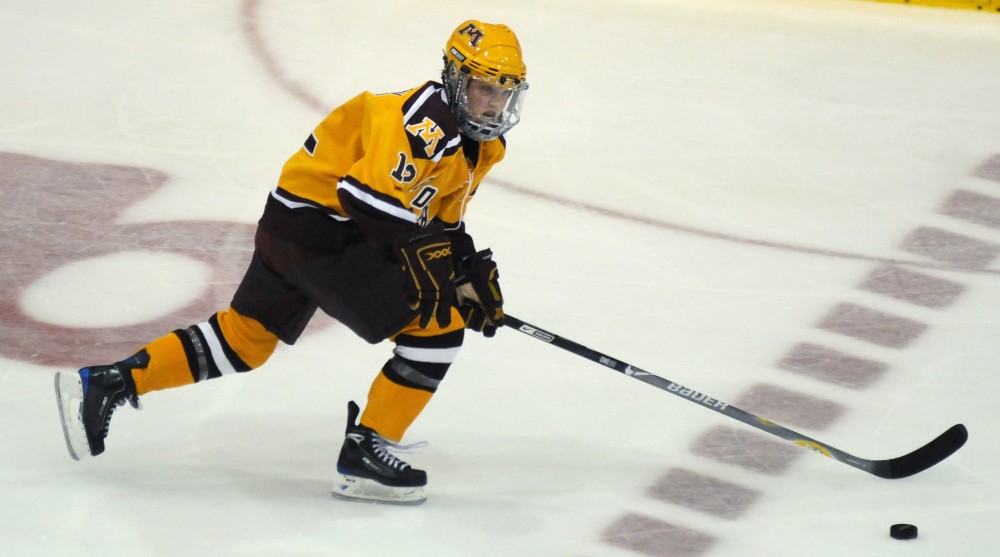 Before and after the game, the University of Minnesota womenâÄôs hockey players were friends with their opponents. The Gophers played Team U.S.A. on Sunday in their final exhibition game before the season. Team U.S.A.âÄôs roster features three Gophers alumni. After a 2-2 tie at the end of regulation, Erica McKenzie helped notch another win for Team U.S.A. Minnesota was outshot 38-30 after outshooting the University of Saskatchewan 47-10 in an 8-0 win Friday night. Gophers alumni on Team U.S.A. are McKenzie, Anya Miller and current Gopher assistant coach Natalie Darwitz , whose fan support was rivaled by senior captain Gigi MarvinâÄôs . Volunteer assistant coach Megan Van Beusekom started in net for U.S.A. Coach Brad Frost said it was exciting to have familiar faces back in the rink but he let his players know it didnâÄôt mean this game would be taken lightly. âÄúAs I told them, U.S.A. is coming here to kick your butts,âÄù Frost said. âÄúTheyâÄôre not here for a homecoming; theyâÄôre coming to beat you off the rink.âÄù In the first period, U.S.A.âÄôs McKenzie netted the first goal at 4:40, after a turnover on the blue line. Minnesota junior Kelli Blankenship , assisted by junior Brittany Francis and senior captain Melanie Gagnon , evened the score at 9:03 with a shot from inside the blue line. The first periodâÄôs pace was a shock for the Gophers. âÄúWe played a lot better after the first. The pace that Team U.S.A. came out and set was extremely high and fast,âÄù Frost said. After much back and forth play in the second period, Team U.S.A.âÄôs Miller put one in at 17:01 with an assist from Erin Keys. Two minutes later at 19:23, Marvin passed to senior Racheal Drazan , whose shot was re-directed by sophomore Emily West to even the score again. The third period went scoreless and forced a five-minute overtime in which McKenzie scored for U.S.A. at 1:31. Caitlin Cahow and Molly Engstrom each earned an assist. The Gophers lost the shootout 2-1 that followed the game in anticipation of the shootouts that will be used in all Western Collegiate Hockey Association womenâÄôs hockey games this season. Each Minnesota goalie played in SundayâÄôs game for a period in order for Frost to determine his starting goaltender. Each gave up a goal with senior Kim Hanlon in the first, first-year Alyssa Grogan in during the second and sophomore Jenny Lura playing the third and overtime segments. He said each goalie looked good and this makes for a tough decision. âÄúTheyâÄôre not making it any easier on me as to figure out who the best one is. ThatâÄôs a heck of a problem to have,âÄù Frost said. âÄúI thought Kim [Hanlon] played a tremendous in the first period to really keep us in the game. I thought Grogan and Jenny [Lura] played very well.âÄù The Gophers had 20 skaters while Team U.S.A. had 13. Frost said they might have been getting tired quicker. âÄúThe two lines they have are extremely good and then you see them every other shift,âÄù Frost said. âÄúItâÄôs not like we get down to their fourth line and we have an advantage.âÄù Gagnon said Team U.S.A. exposed the Gophers weaknesses. âÄúI think they showed us we need to play a little more disciplined, like with the puck on our stick and we need to be a little quicker in our decisions. TheyâÄôre quick and great with the puck so they made us move around,âÄù Gagnon said. Minnesota alumni scored all three of Team U.S.A.âÄôs goals which Frost said showed the strength of the Minnesota program. âÄúI think those kids were excited to come back and play against their old team but we really pride ourselves on getting great people and great players in here,âÄù Frost said. Even though it would be nice to have McKenzie, Miller and Darwitz on his roster again, Frost is pleased with his current roster. âÄúIâÄôm really excited about the future for this team. The kids we have in the room are the ones we are going forward with.âÄù Melanie Gagnon feels she redeemed herself from previous games against Darwitz but now looks ahead in the season. âÄúShe got a little frustrated at the end so thatâÄôs always a good sign,âÄù Gagnon said. âÄúNow the games count so we have to get going a little bit because things are on the line,âÄù Idolizing the other team Team U.S.A.âÄôs roster also featured many Olympians. When Jenny Potter and Angela Ruggiero won the gold medal in the 1998 Olympics in Nagano, Japan, first-year Anne Schleper was eight-years old. âÄúIâÄôm kinda taken back. TheyâÄôre your idols when youâÄôre growing up. At first itâÄôs almost hard to believe that youâÄôre able to play at this type of level,âÄù Schleper said. âÄúItâÄôs definitely cool to play idols that you looked up to when you were younger.âÄù