Minnesota Teen Challenge offers a way to freedom and an education. 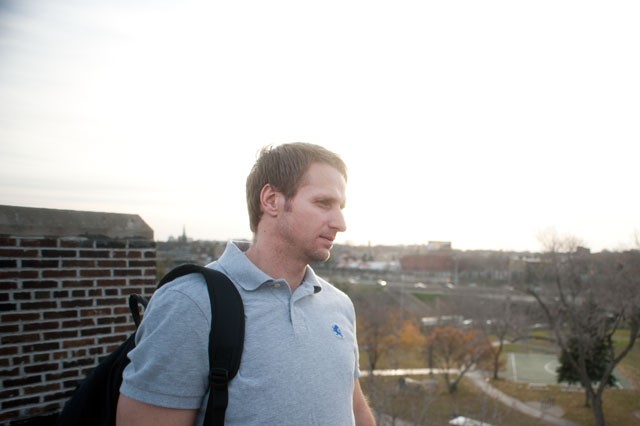 Minnesota Teen Challenge resident Chad stands Tuesday on the roof of the program’s Portland House. Chad, who is now 40, hopes to earn a degree to become and electrician.

Chad and Bryan, two men whose lives were interrupted by drug addiction, agree that had it not been for a place like Minnesota Teen Challenge, their lives would still revolve around illicit drug use.

Minnesota Teen Challenge is a place for both teens and adults who are struggling with chemical dependency to get help in a city where the use of heroin has become an epidemic, as described by Chad.

Chad, who started using marijuana at the age of 12, is now 40 and is in his 13th stint of drug rehabilitation since April. This time he is making his way through the long-term, faith-based program at Minnesota Teen Challenge. The center does not release the last names of those enrolled in its
programs.

He described his journey using drugs to not truly begin until the age of 16, when he began using cocaine, and said that he has dipped into various drugs, including heroin.

Chad was born and raised in south Minneapolis, where he was said to have lived in a good home but was surrounded by drugs and peer pressure as a teen.

“Since I wasnâÄôt very educated âÄî book smart âÄî I tended to play a lot of sports,” he said. “That there was, I guess, my
feel-good. ThatâÄôs how I fit in everywhere was through sports. Then drugs came along and just threw me for a loop because you start using them young âÄ¦ Everything you do is altered by drugs and alcohol.”

Chad, who admitted to using heroin on the streets of Minneapolis, described the epidemic as growing since he began using.

“You can find heroin pretty much anywhere in the Twin Cities,” he said. “ItâÄôs an epidemic. My children âÄî now I donâÄôt know if theyâÄôre doing heroin, but I know there is OxyContin involved âÄî and that is the step before heroin.”

“ItâÄôs another reason people should know not to abuse OxyContin,” she said.

Hennepin County narcotics deputies believe heroin from Minneapolis is more pure compared to that in other cities, Kiava said. This is something that could indicate dealers are trying to establish a market, she said.

“The price right now on heroin is, IâÄôm telling you what, itâÄôs so low that $10 and youâÄôre high for a day,” Chad said.

Chad blames the low price and purity of the drug for hooking kids and knocking them off their tracks.

Minnesota Teen Challenge has seen a definite increase in those admitted to the program for heroin addictions. In the past decade, the percentage of total patients admitted for heroin has risen from 1.6 percent to more than 9 percent, said spokeswoman Patricia McConeghy.

Minnesota Teen Challenge has helped both Chad and Bryan get back on their feet.

Bryan, 28, will graduate from the program after 11 months and head to St. Cloud State University for spring semester in January to pursue a degree in information systems.

That is only a small part of the whole for residents at Minnesota Teen Challenge.

“We really want to help people find the root of the issues that they have and why they started using,” she said. “Then they can leave the program knowing that theyâÄôve dealt with the reason that they used and that way they can stand on their own two feet walking out the door.”

“There is the obvious difference that this is a faith-based program,” Bryan said, “But if you remove that faith-based component, then the question is âÄòIs it any different?âÄô Most definitely different.”