As of Tuesday, one U.S. dollar equals about seven Chinese yuan. 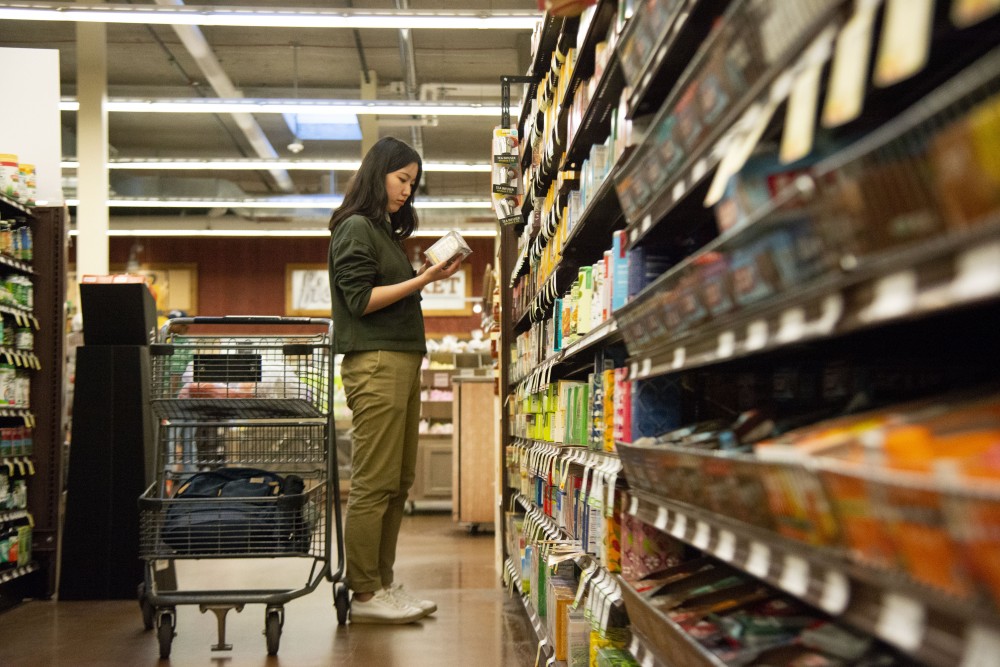 Xuening Gao, a student from China studying Economics, shops for groceries at the Fresh Thyme in Prospect Park on Monday, Sept. 23. Due to currency exchange rates, living expenses and tuition fees have increased for Chinese students.

As the United States-China trade war continues to escalate, many Chinese international students at the University of Minnesota are feeling its effects through a fluctuating currency exchange rate which is making tuition, among other expenses, soar.

The exchange rate between the U.S. dollar and the Chinese yuan has been increasing since early 2018, despite a slight improvement at the end of the year. The exchange rate changes daily, and, as of Tuesday, one U.S. dollar equals approximately 7.1 yuan. Meanwhile, Twin Cities nonresident undergraduate student tuition increased 10 percent between the 2018-19 and 2019-20 school year, according to the Office of Institutional Research. During the same time, nonresident graduate tuition increased 3 percent.

The ongoing United States-China trade war first started in January 2018 when President Donald Trump announced tariffs on solar panels and washing machines imported from China. Trump’s goal was to reduce the trade deficit between the two countries and improve the condition of American companies in China, according to multiple national news outlets.

Chinese government regulators contribute to the yuan’s decrease in value in order to make the exchange rate more market oriented, according to Time magazine.

“The most instant consequence [of the trade war] is the cost of studying in the U.S increases,” said Jingnan Liu, a University senior from China studying economics. “The cost of buying [the] same amount of dollars with Chinese yuan increases. This change has already reflected on my billing statement of credit card.”

When talking about the impact of the trade war, Noki Cheng, a 22-year-old Chinese transfer student, also said the fluctuating exchange rate has an effect.

“The depreciation of [the Chinese yuan] increases my living expense here,” Cheng said.

Cheng also said he is worried the trade war would undermine his relationship with Americans since their home countries are now “fighting” economically. Many students echoed his concerns.

“I am also a little worried about [the] U.S. society’s hostility towards Chinese,” Cheng said. “But up to now, it seems okay.”

Xuening Gao, a fourth-year economics transfer student from China, said she is worried about the effect the exchange rate will have on her tuition.

“The exchange rate has increased [a lot] in the last year, which means I need more for tuition,” Gao said.

As of 2018, there were more than 2,500 Chinese students at the University, which makes up the largest percentage of international students on campus according to data from International Student and Scholar Services.

Robert Kudrle, an international trade and investment policy professor at the Humphrey School of Public Affairs, said he thinks the trade war will not end soon.

“The exchange rate is depending on the Chinese government,” Kudrle said, adding that the countries’ economies often depend on one another.

While some students worried about an increase in living expenses, many parents in China are paying more for their children to go to school as well.

Ling Lu, Cheng’s mother, said their family has suffered from the high cost caused by the rising foreign exchange rate. She said the trade war was inevitable.

“For my family, the cost of exchange for dollars indeed increased. But compared to our country’s development, the loss is negligible,” Lu said. “I think many families that send their children abroad would hope that China will win the trade war or at least not be afraid of it.”

Shijun Gu, a University graduate instructor who teaches classes about China’s economy, said he thinks both China and the United States are now growing tired of the trade war.

“There is a trade-off in between. [The] Trump administration will weigh the fact that undermining China’s economy with tariffs and forcing China to change its trade and domestic economic policies will make American consumers suffer at the same time,” Gu said. “It is difficult to order the U.S. companies move out of China, since it is impossible to find a replacement in [the] short run.”

Gu also expressed his concerns over academic communication between the U.S. and China.

“For many Chinese families, the most direct influence is their financial burden because of the Chinese yuan devaluation. They will also consider whether it is worthwhile sending their children to study in the United States,” Gu said. “This is a long-term problem. The tuition is pretty expensive, yet how much they could get back?”