The designer himself, 90-year-old Jack Lenor Larsen, was at the exhibit's opening. 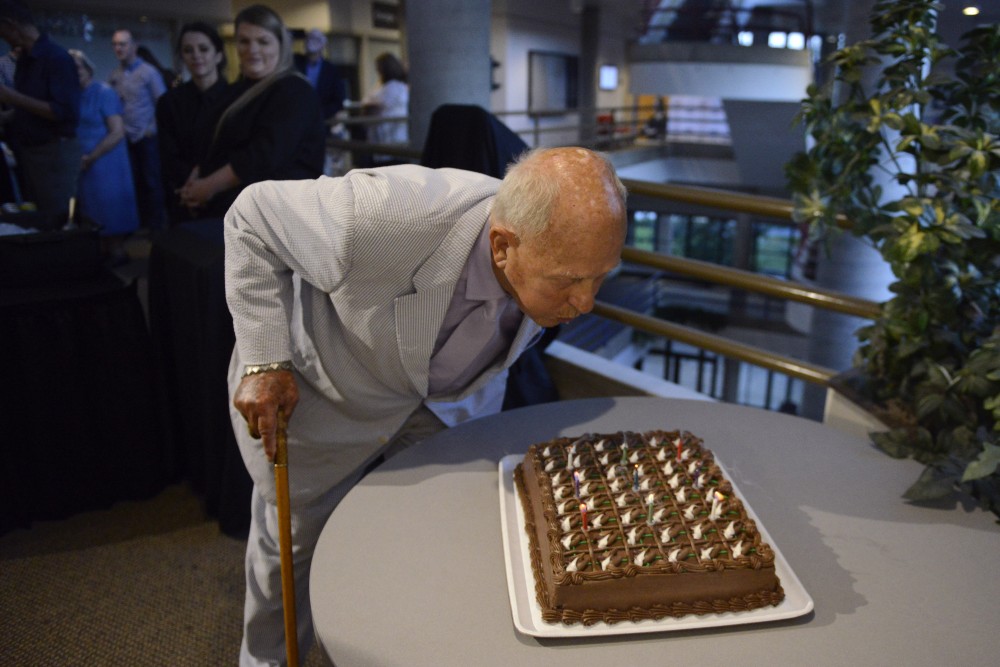 Jack Lenor Larsen celebrates his 90th birthday at the Goldstein Museum of Design on Friday, Sept. 22 in St. Paul. Larsen is known for his innovation with textile design.

Design enthusiasts celebrated the opening of a new exhibit featuring works from a world-renowned textile designer at the University of Minnesota’s Goldstein Museum of Design Friday.

The exhibit of 90-year-old Jack Lenor Larsen’s works will be open through January and features about 70 of his creations. Some say Larsen, well-known for his textile work, was one of the most innovative designers of the 20th century.

Some examples of Larsen’s textile developments include fold dyes, printed velvets and stretch fabrics, said Stephanie Zollinger, an interior design professor and co-curator of the exhibit.

“Everybody, at one time or another, runs into all of these fabrics,” Zollinger said. “He’s a designer who changed the entire field of textiles with these innovations, and it’s really seldom that you have one person be the instigator of so many advances.” Larsen said he picked up ideas for textile technologies and techniques from other cultures while traveling abroad throughout his lifetime, including 39 trips to Japan.

“People were doing things that nobody had ever done before. That was exciting,” he said.

For example, Larsen was one of the first designers to license his own name, Zollinger said.

He also created an array of products for the home, like tableware that complemented his fabrics, Nelson-Mayson said, which was uncommon in the mid-20th century.

Among textile designers, Larsen is the “best of the best” with “the most … inspirational textiles,” said Brenda Stock, an interior design consultant with 25 years of design experience.

At age 90, Larsen doesn’t have plans to slow down anytime soon. When asked by an exhibit attendee if he is retired, Larsen replied, “I won’t retire.”

Correction: The exhibit featuring Jack Lenor Larsen’s works opened with a reception at the Goldstein Museum of Design Friday.