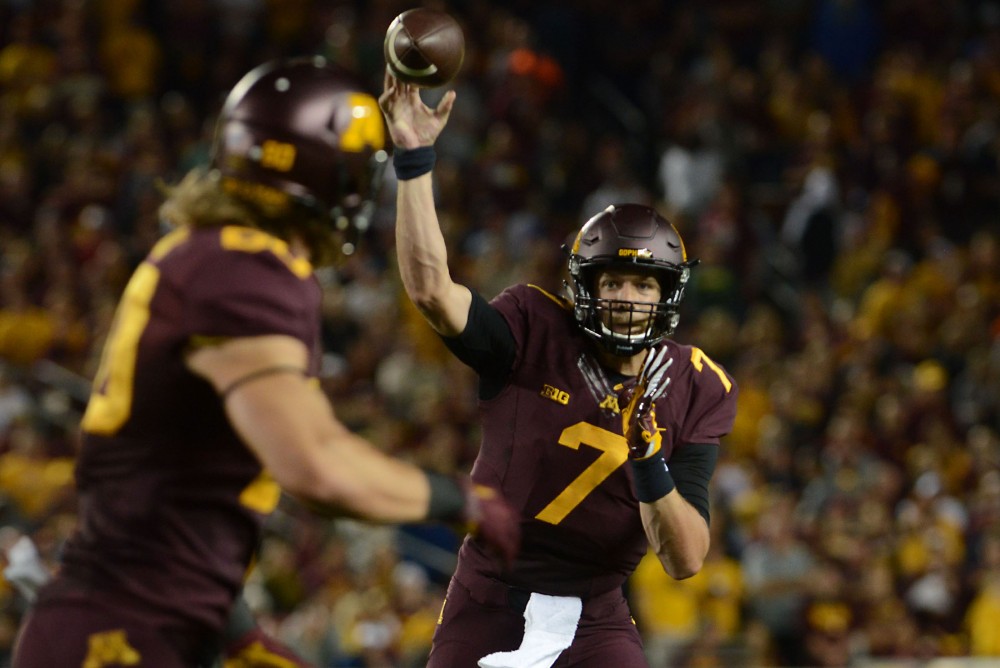 But Minnesota was able to make it through against Oregon State in its first game of the season and staged a fourth-quarter comeback that ended in a 30-23 win to avoid an upset at home.

“We shot ourselves in the foot a few times but we preach a next play mentality,” head coach Tracy Claeys said. “We can’t have the snaps over the quarterback’s head. We dropped a punt … the targeting penalties and the injuries. It had our depth chart all messed up.”

Sophomore center Tyler Moore sent the football above Leidner’s head midway through the third quarter, which sailed into the end zone for an Oregon State safety to bring them within one.

The Beavers were forced to punt after three plays, but Gophers senior wide receiver Drew Wolitarsky fumbled the return and the Beavers reclaimed the lead four plays later.

The Gophers later jumped ahead on a two-yard run by Smith with a nifty spin move off a defender’s back early in the fourth quarter to set the score at 24-23.

“They had a guy come off each edge. I just had to make a move so I didn’t get killed,” Smith said. “Ended up with a touchdown.”

Smith wasn’t the only one with a good game on the ground for the Gophers. Redshirt senior Leidner finished with 76 yards and two touchdowns.

The first Gophers touchdown was made via a six-yard run by Leidner — tying the game 7-7 while the second touchdown, a four-yard run by Smith, put the Gophers up 14-7 in the second quarter.

The Beavers tied it up four minutes later on a 30-yard touchdown pass to wide receiver Victor Bolden Jr.

Minnesota sophomore Emmit Carpenter hit his first career field goal, putting the Gophers ahead 17-14 as time expired in the first half.

Minnesota had three different players ejected from the game for targeting penalties. Linebackers Cody Poock and Jonathan Celestin were removed from the game in the first and third quarter, respectively, and Devers was sent out midway through the fourth quarter after a late quarterback hit.

After the game, Claeys said he thought he only had one targeting call in the last four years when he was the defensive coordinator.

“[Defensive coordinator Jay Sawvel] must’ve had them a little bit fired up,” Claeys said. “I’m all for the rule and we’ll work on lowering the target on people.”

The ejection ended Devers’ remarkable first game on a sour note, but the freshman still finished the night with two forced fumbles on two sacks. Both fumble recoveries later led to offensive touchdowns for the Gophers.

Besides the targeting penalties that got three defensive players ejected, Poock’s replacement — linebacker Nick Rallis — left the game after an injury that was suffered in the second quarter.

“It was kind of heartbreaking to see all our starting guys go out like that,” senior safety Damarius Travis said. “I guess it’s just part of the game.”

One hour until kickoff at TCF Bank Stadium. #Gophers take on Oregon State for the first game of the season pic.twitter.com/EW6Z735Icg

This forced the defense to make adjustments, including moving senior linebacker Jack Lynn from the outside to the inside.

“There was no thinking at that point, it was more reacting,” Lynn said. “I’ve played inside so I wasn’t panicking.”

Ryan Nall was the standout player for Oregon State. The sophomore running back finished 151 yards; 71 on the ground and 80 through the air.

Oregon State scored a majority of their points through the air. Junior quarterback Darell Garretson finished with 228 yards on 40 attempts and three touchdowns.

“He really manages the game well … I was impressed with the quarterback,” Claeys said. “They’re a lot better offensively than they were a year ago.”

Minnesota’s leading rusher from last year, sophomore Shannon Brooks, was ruled out before the game due to a foot injury.

That didn’t affect the ground game too much, as Minnesota finished with 150 yards and four touchdowns — including new career highs for Smith in yards and touchdowns in a game.

“It was definitely a bang,” Smith said. “A good way to start the season.”

Leidner missed spring practices earlier this year with surgery on his left foot, but said he didn’t have issues last night.

Leidner only had 130 passing yards on 26 attempts. This was his first game without a touchdown through the air since Oct. 3, last season.

Leidner was without one of his reliable targets, as junior tight end Brandon Lingen missed the game with a shoulder injury. It was also the offense’s first game with new offensive coordinator Jay Johnson and offensive line coach Bart Miller.

“There definitely were some rusty parts,” Leidner said. “It’s good to come out with a W, overall. Those aren’t easy to come by, by any means, so you know, that’s the most important part right there.”