Is crowd-surfing on the final? 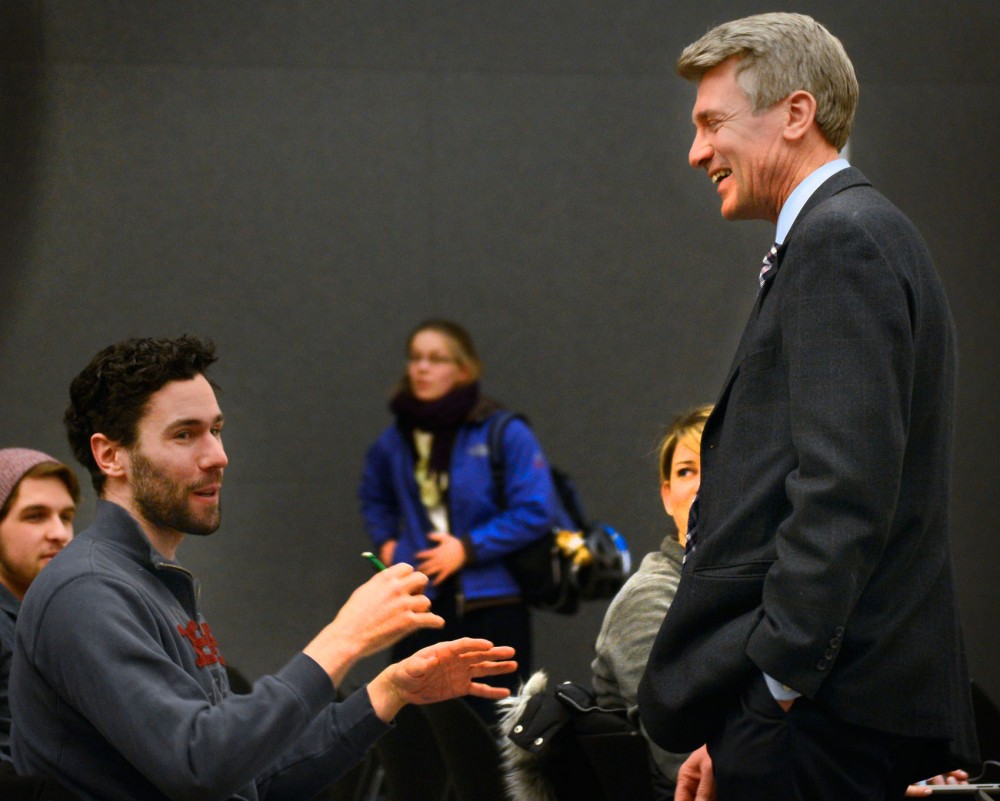 Former Minneapolis mayor R.T. Rybak strolled through a bustling Rapson Hall classroom Monday night, greeting and joking with students before he began teaching his first class at the University of Minnesota.

With his joint appointment through the Humphrey School of Public Affairs and the College of Design, Rybak will give University students a taste of the knowledge he’s gathered from serving 12 years in City Hall.

“I hope they come out of this with a realistic idea of what it’s like to lead,” Rybak said.

As a distinguished visiting practitioner at the University, Rybak is teaching the course “Mayor 101.” About 100 students will learn how Rybak made tough political decisions and how to put those skills to work.

Besides teaching at the University, Rybak will also serve as the executive director of Generation Next, a group that aims to shrink the achievement gap and is co-chaired by University President Eric Kaler.

“I hope to help align many different arms of the city, public and private, to help our kids,” Rybak said.

Rybak’s first “Mayor 101” lecture Jan. 27 was canceled due to extreme cold weather, along with classes across campus. Still, he held office hours for students at a Dinkytown bar, sharing the advice he’d give a new mayor.

“There’s a difference between being liked and respected,” Rybak told the group of about 35 students. “You will not please everyone.”

The eager students crowded onto the Kitty Cat Klub‘s dimly lit couches during the office hour to listen and ask questions. After, the group gathered for a photo Rybak later shared on Twitter.

Rybak is an avid Twitter user, said Humphrey School Associate Dean Laura Bloomberg, who worked with Rybak to develop the class structure and syllabus. The course requires students to have a Twitter account for class discussion.

“[Rybak]’s probably far more technologically adept than a lot of our instructors at the University are,” she said.

Bloomberg said Rybak has a national reputation for being an innovative leader while staying hip. He’s likely to bring the same energy to class that allowed him to crowd-surf at First Avenue, she said.

“It’s been really actually inspiring to work with him,” School of Architecture head Renee Cheng said. “I’ve rarely had so much fun.”

After lectures each week, students will work with groups and community members to try their hand at mayoral tasks, she said.

Students will complete four large projects, including a public safety plan for the University inspired by the recent crimes on and around campus, Rybak said.

Adam Chelseth, a second-year public policy master’s student and one of the teaching assistants for the course, said students will be challenged to think about how they would respond to various issues if they were mayor.

First-year public policy master’s student Thomas Durfee, who is taking the course, said he will benefit from examining the practical reasoning behind policy decisions.

Other elected officials have also turned to teaching at the University after leaving office.

Former U.S. Vice President Walter Mondale  teaches the “Great Debates of Our Time” course at the Humphrey School, and former Minneapolis Mayor Sharon Sayles Belton has affiliated herself with the school.

“Mayor 101” will also look at the processes behind planning a city, like designing efficient transportation lines and sufficient public space, Bloomberg said.

Students will discuss initiatives from Rybak’s time in office that are largely still in place, Bloomberg said.

“That’s the way all learning should be,” she said. “I think it will be a fantastic experience for them.”

Despite his lack of classroom experience, Rybak is a natural teacher and knows exactly what he wants to convey to students, Bloomberg said.