Despite discussion to eliminate or modify the council, RCAC continues to meet ahead of recommendations. 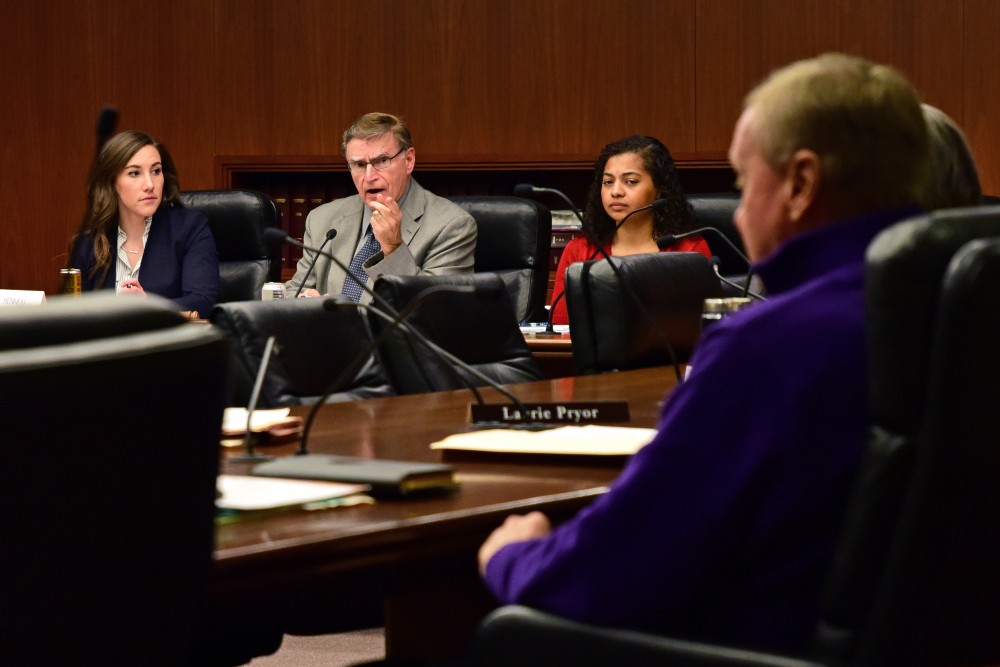 Minnesota House of Representatives Committee on Higher Education Chair Bud Nornes speaks to Rep. Gene Pelowski during the committee's hearing on the University's Board of Regents selection process at the Minnesota State Office Building on Feb. 28, 2018.

Despite former attempts to modify or dismantle it, the Regent Candidate Advisory Council will soon bring candidates to lawmakers before the upcoming University of Minnesota regent election.

Members and legislators have questioned the council’s role and its assumed bipartisanship over the past few elections. But members of RCAC said they see their role in the regent selection process, which will occur over the upcoming legislative session, as recommending diverse and competent candidates to lawmakers.

“Diversity is a big goal. Having a robust candidate list and a wide variety of perspectives and experiences and walks of life,” University of Minnesota student RCAC member Megan Olson said.

The regent selection process came under fire last session as legislation was proposed to eliminate the council all together.

Another bill introduced by former Sen. Michelle Fischbach, R-Paynesville, then chair of the Senate higher education committee, proposed to limit RCAC’s recommendations to the Board of Regents’ at-large seats. Under the proposed legislation, state lawmakers would decide the selection process for the boards’ congressional district seats.

While the legislation did not pass, current council members still believe the process could be improved.

“I don’t know that eliminating the council would be the best choice, but I think everyone would agree that modifying the process is essential,” said Sen. Rich Draheim, R-Madison Lake, who vice chaired the Senate higher education committee last session.

RCAC member Rep. Gene Pelowski, DFL-Winona, said he would not be surprised if the council was eventually repealed. “My view is that the committee has become even more corrupt in the political process they were supposed to correct,” Pelowski said.

RCAC was not involved in the special election of Regent Randy Simonson in May after the resignation of Regent Patricia Simmons. Instead, a legislative committee collected applications and a joint committee  screened candidates.

In 2017, the regent election of four regents saw the selection of Regents Steve Sviggum, Darrin Rosha, David McMillan and Ken Powell. Sviggum was not recommended by RCAC.

“The committee has never really had a big role the past few times, their recommendations have been ignored so the committee is an … afterthought.” Pelowski said.

The council has met several times since August for the upcoming 2019 selection. The last meeting, held Nov. 20, included a review of regent candidate recruitment efforts.

Olson said she and Minnesota Student Association President Simran Mishra have been working together to provide input on what students want in candidates. Olson and Mishra have also been discussing ways to make the student regent selection process more accessible.

“My hope is that people from all the campuses apply so it’s not all just Twin Cities,” Olson said. “I’ve been reaching out to a lot of different people and trying to see from different perspectives to bring different individuals and different things to the table.”

Appointments to the council will be cemented in the coming weeks, according to Draheim, who said applications are still open for the four regent seats. The selection process is expected to ramp up as the next legislative session begins in January.

“When you’re looking at Regents, there are some yes men and yes gals that just say ‘yes’ to whatever; groupthink,” Draheim said. “I think some of us want people that have different life experiences and bring up different perspectives to the table.”