Stefan Brancel is one of many members in the University of Minnesota Juggling Club. 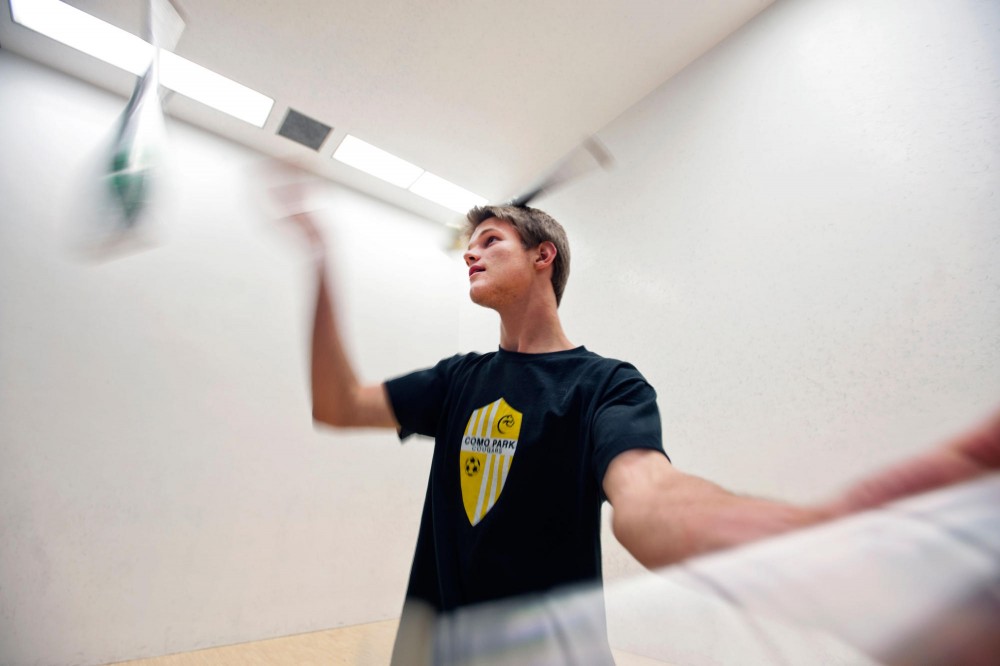 Stefan Brancel has juggled for 12 years.

The University of Minnesota sophomore has taken his passion across the country, where he has broken world records and juggled with international challengers.

For the past year, Brancel has been a member of the UniversityâÄôs Juggling Club âÄî a noncompetitive group that students join to âÄújust have fun,âÄù said Mark Zingler, the clubâÄôs president.

But for Brancel, juggling is not just a hobby. He has been competing since 2007. In 2008, he won one silver and four gold medals in the International JugglersâÄô AssociationâÄôs Numbers Championship, which consists of several challenges that measure competitorsâÄô ability to juggle the most objects for the most catches.

Brancel was also a part of the team that took first place in IJAâÄôs Stage Competition in  2009 âÄî the same year he said he broke the world record for 15-club 3-person passing.

Brancel broke that record âÄî of the most passes without dropping a single club âÄî twice since, in 2010 and 2011, with a different group.

Brancel became acquainted with juggling when he was 8.

âÄúIt was pretty much a chore in my house,âÄù he said. âÄúIt was something we had to do if we wanted to watch a movie.âÄù

BrancelâÄôs dad, also a juggler, felt the sport was a good way to build hand-eye coordination.

By the time Brancel was 11, he could already juggle up to five balls. He joined Jugheads Youth Juggling Company in Edina where he learned new techniques. By his freshman year of high school, he was teaching others as the assistant to one of the programâÄôs coaches.

The program greatly increased his abilities and his love for juggling, Brancel said. By his senior year, he was attending the program five times a week, drawn by the friendships and the challenge.

âÄúOne thing I like about juggling is that your ability level is tangible âÄî you can count it,âÄù Brancel said.

Before joining Jugheads, he could juggle three clubs for a little longer than 30 seconds. By his senior year of high school, Brancel could handle five clubs for more than six minutes.

Brancel also credits Jugheads with teaching him about the sense of community in the juggling world. Around 140 kids were in the juggling class when he attended, and he made many friends.

âÄúI learned give and take, because I was helped by people who were older and better than me,âÄù Brancel said.

The UniversityâÄôs Juggling Club currently has 25 members, all at different levels âÄî from beginners who want to learn how to juggle to seasoned jugglers who toss torches and clubs, Zingler said.

He said the club is occasionally contacted for shows, but since itâÄôs a nonprofit student organization, the money is used to pay the registration fee for the University and storage for the locker.

Members arenâÄôt paid, but they see other benefits of the club.

Zingler, who has been in the club for the past two years, said he was in the middle of the pack as far as talent. He can juggle five balls and can also juggle five clubs. He also juggles rings and balls, and sometimes, when people at events request it, Zingler will juggle knives.

Brancel said learning to juggle is a drawn-out process.

âÄúLearning to juggle is definitely the most difficult part of juggling because it is really boring and repetitive. But once you learn how to juggle, then there are 10 different things you can do, then there are 20 things you can work on,âÄù Brancel said. âÄúI really disliked it until I got to the point where I could do things and enjoyed it.âÄù

Ormsby said anybody with any level of juggling talent can join the group.

âÄúWe actually enjoy teaching people to juggle,âÄù he said. âÄúPeople feel so good when they get it.âÄù