Curator for Children’s Literature Research Collections Lisa Von Drasek sets out to illuminate the deeper power of the pre-bedtime tradition. 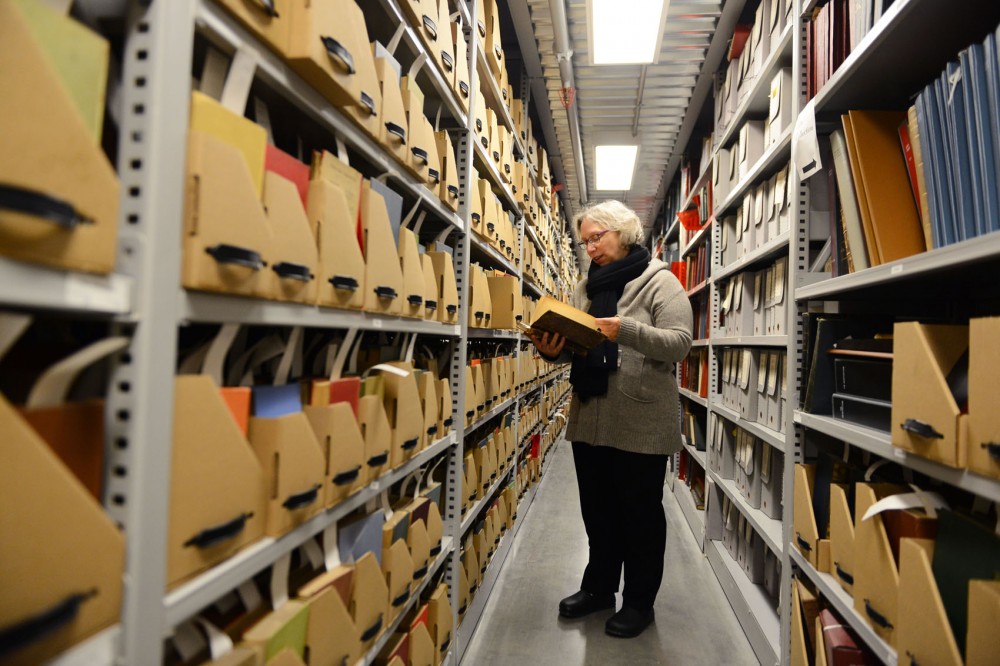 Lisa Von Drasek, curator in the Children's Literature Research Collections at Elmer L. Andersen Library, looks through rows of books in one subset of the underground archive.

Holding in a yawn, a parent sets down a copy of “Goodnight Moon” and looks at their starry-eyed child. It’s way past bedtime but still, two small hands grip the cover and the begging commences: “Read it again!”

Maybe you were this kid, maybe you weren’t. For Lisa Von Drasek, Curator for Children’s Literature Research Collections, that pleading phrase is what inspired her upcoming talk in the University of Minnesota Libraries Archives and Special Collections’ inaugural installment of their “First Fridays” lecture series.

She sat at her desk in the Elmer L. Andersen library, equipped with a sweater, thinly framed glasses and a smile. Judging by the innumerable copies of children’s books and the way her eyes widened when anyone mentioned them, one thing was clear: Von Drasek is a book-lover through and through.

She was the director of the Center for Children’s Literature for 15 years at the Bank Street College of Education in New York. Also a librarian at the school, Von Drasek made a name for herself as an archivist and a critic, reviewing children’s books in the New York Times and other publications.

“I believe that, for me, children’s literature is the touchstone for lifelong literacy,” she said.

When she heard the previous curator, Karen Nelson Hoyle, was retiring, Von Drasek set her sights on Minneapolis.

“I went after the job like I was invading Normandy,” she said. Her gung-ho approach won her the job and now she’s been at the University for about a year.

The Elmer L. Andersen library is an oasis for book-lovers like Von Drasek. It has one of the most respected archives in the world and is home to the Kerlan Collection. It’s a world-renowned children’s literature amalgam that contains over 100,000 books, original manuscripts, illustrations and countless other materials.

Von Drasek’s giddiness was palpable when she headed underground to the library’s Fort Knox of an archive, using her key card more than four times to unlock her way into the fortress.

Every time her access was granted, she grinned at the handle.

As she entered the main door, Von Drasek pointed at the endless rows of tightly packed shelves.

“I’m looking at our collection and the books that are timeless. What is it about those books and those images that make us want to return to them?” she said about her “First Fridays” talk.

For Von Drasek, the children’s genre is just as invaluable to literature as “Moby Dick,” since it influences reading habits at an early age.

“This is a time in our childhood that we gain empathy,” she said. “This is the beginning of a child’s love for literature.”

These books encourage repeat readings, she said, because they’re an exposure to cultural narratives. Von Drasek pointed to Ezra Jack Keats’ “The Snowy Day,” one of the first picture books to feature an African-American protagonist.

“Kids are seeing their own lives reflected, but also windows into other lives,” Von Drasek said.

Kate Dietrick, an assistant archivist at the library, said that the books are important from a historical perspective as well.

“We probably won’t see the payoff until a hundred years from now,” she said. “The goal of archives is to help research; we want to keep the process of the art.”

Author and literature professor Julie Schumacher is one author furthering children’s lit, penning five books for kids. She’s written for older audiences as well, but after years of reading bedtime stories to her children, she said she wanted to create characters they could relate to.

“Children deal with all of the same emotions that adults do, it’s just that they’re experiencing it for the first time,” she said.

Schumacher agrees with Von Drasek on the genre’s significance.

“It fosters a parent-child bond by having someone sit with you and listen to a story — there’s a sense of intimacy and trust created,” she said.

Perhaps this brings up memories of your tattered Dr. Seuss collection, your parent playfully voicing characters at your bedside or a first visit to the library. Any book geek can confirm that initial experiences with literature run deep.

Von Drasek is just happy to be a part of that magic.

“It’s serendipity,” she said, clutching onto a hardcover. “The archives are full of it.”

What: First Fridays: Objects of Desire