A University of Minnesota football player talked to the Minnesota Daily about the team’s boycott, history of sexual assault training and P.J. Fleck. 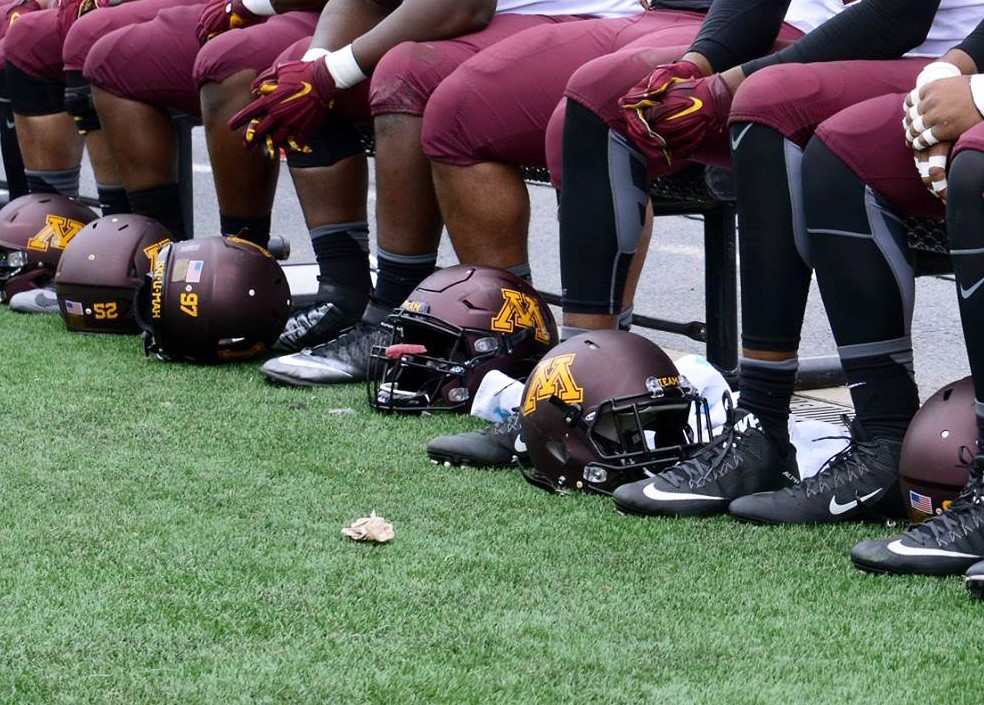 Gophers football players sit on the sidelines during a game at TCF Bank Stadium on Oct. 3, 2015.

As a new Gophers football coach and athletics director try to change the culture of the program, one football player says the new tone is more serious than that of previous coaches.

The player spoke with the Daily Friday and asked to remain anonymous to preserve his standing with teammates as he discussed the boycott, how the team has changed under the leadership of new head coach P.J. Fleck, and past run-ins with sexual assault training.

He said Fleck told the team if any of them are involved in incidents similar to the alleged assault, “there’s no place for you in this program.”

“The big thing that [Fleck] said was, ‘you can’t change whatever did happen,’” he said. “’But either way, this is the new standard.’”

This approach to misconduct is more proactive than those taken by former coaches Tracy Claeys and Jerry Kill, the player said. “There’s definitely some walk behind the talk [with Fleck].”

At a Friday meeting of the University of Minnesota’s Board of Regents, Athletics Director Mark Coyle presented potential changes to reduce the chance of student athletes committing sexual assault. The changes come amid fallout from a football team sexual assault scandal that left six players disciplined.

Coyle announced changes to the department’s student athlete housing policy, saying the department will require all freshman athletes to live in dorms.

The Minnesota Daily ran a story on the team’s sexual assault training and prevention plans Feb. 2, in which several players declined to comment. The same day, a football player reached out to the Daily to set the record straight.

“I didn’t know enough about it to say unequivocally that these people haven’t done anything wrong,” said the player, who opposed the boycott. “Everyone went around, and … I wasn’t in the majority.”

Players supporting the boycott were most vocal, he said, but roughly half of the team never spoke up.

These early discussions framed the boycott as a protest against the suspensions, which players said came before the accused could give their account of what happened, the player said.

“It was never about condoning sexual assault or … whether sexual assault happened or not,” he said, adding some players didn’t realize “inherently it’s going to be about that.”

The team did discuss how the boycott might impact the alleged victim-survivor, he said.

“A lot of people saw it as a racial thing as well,” he said. The University’s Office for Equal Opportunity and Affirmative Action headed the investigation that led to the suspensions of 10 African-American players.

There was also a lot of concern over their teammates receiving due process, he said, but “you don’t have … a right to play football.”

“I’ve never thought that the U was either attacking football players or not taking the issue seriously, which I think is a good balance,” he said.

And the EOAA report contributed to the team’s decision to end the boycott, the player said, in addition to fan backlash.

The boycott backfired, the player said, partially because the team didn’t make their reasoning clear enough.

The team should have stepped back and considered other options — like meeting with administrators — before boycotting, he said.

“The decision was always either to boycott or not,” the player said. “It was black or white.”

But many on the team grew frustrated with the administration’s communication throughout the process, he said.

“A lot of people were really mad at MarkCoyle because there was a lot of bad communication … right before the boycott and going into it,” the player said.

Coyle “wasn’t very forthcoming” when he briefed the team on the suspensions recommended by the EOAA, the player said.

There was also miscommunication with Kaler, he said.

More anger toward the administration came when Claeys — who had publicly supported the boycott — was fired Jan. 3, he said. “We saw it as him getting punished for making a mistake that we made, and a lot of people didn’t like that.”

Much of the frustration has evaporated since the coaching transition, he said, as P.J. Fleck has brought changes to the program.

The new coaching staff has created an atmosphere of accountability, the player said.

While Fleck has yet to address sexual assault and consent with the team, the player said there are plans to discuss those topics as well as other personal development lessons.

Still, the player said the training doesn’t always reach everyone.

The presentations typically highlighted “the most heinous” instances of sexual assault, he said, which many players dismiss as improbable.

But the University isn’t solely to blame for the training’s flaws, he said.

“I think the programming could be better to prevent that, but I think sometimes you need to look past those sort of things as well,” the player said.

Annual athletics department sexual assault training sessions could use some tweaks, he said, since men and women need different lessons on the topic.

He said many football players view consent as a complex topic and said alcohol can further complicate situations.

Team members have grown more cautious since the events of this fall, the player said.

Some efforts have already been made to promote awareness for sexual assault victim-survivors.

When the boycott ended, the team contacted the University’s Aurora Center for potential collaborations on sexual assault prevention awareness, the player said, but he hasn’t heard any updates.

Still, he said not all on the team are “hyper-passionate” about awareness efforts.

None of the players condone sexual assault, but “I don’t think a lot of people are maybe actively pursuing anything,” he said.

The player said the team should be involved in awareness efforts and have conversations with victim-survivors about their experiences.

“I think that’s where a lot of progress gets made, is when the two different groups sit down together,” he said.

Reaching out to sexual assault survivors could help curb the perception that the team doesn’t care about sexual assault, he said.

“You can say something as much as you want,” the player said. “But actions speak a lot louder, so getting out and doing something to support survivors of sexual assault or help educate people about sexual assault, I think that would do a lot image-wise.”