Maturi’s future with U undecided by Pres. Kaler

Maturi's contract runs through June of 2012. 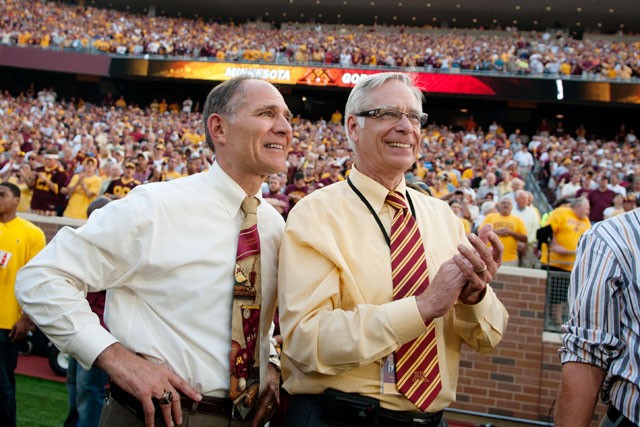 With one year remaining on University of Minnesota athletics director Joel MaturiâÄôs contract and Eric KalerâÄôs assumption of the presidency of the University last week, MaturiâÄôs future is once again the subject of speculation.

Last fall, Gophers football fans, boosters and former players criticized Maturi over the failed tenure of former coach Tim Brewster, whom Maturi hired and then granted a contract extension before he left Minnesota with a record of 15-30.

Since he hired Jerry Kill as BrewsterâÄôs replacement, public bashing and calls for the ouster of Maturi have subsided considerably.

The question now is whether Kaler will extend MaturiâÄôs current contract beyond its expiration in June 2012.

In an interview with the Minnesota Daily last week, Kaler said itâÄôs too soon for him to decide whether to offer Maturi an extension.

âÄúI am going to spend the next three months or so evaluating the University, learning about whatâÄôs important and the people who are involved âÄî so IâÄôll be making an evaluation of many people, but IâÄôm not going to single out an athletic director,âÄù Kaler said.

Maturi could not be reached for comment on this story.

Evaluating MaturiâÄôs performance at Minnesota is a highly subjective process. His supporters point to, among other things: the construction of TCF Bank Stadium; his merging of the menâÄôs and womenâÄôs athletics departments in his first year on the job in 2002; his maintenance of 25 varsity sports despite a thinly-stretched budget; and perennial high finishes in the Learfield Sports DirectorsâÄô Cup, the definitive benchmark of academic achievement among student athletes.

Minnesota is ranked 19th out of 279 schools in the most recent standings.

His detractors, meanwhile, note the decline of the schoolâÄôs three revenue-producing sports âÄî football, menâÄôs hockey and menâÄôs basketball. Also drawing their ire is the money lost when the University had to buy out the contracts of prematurely-dismissed coaches Brewster, his predecessor Glen Mason and former basketball coach Dan Monson.

One person to whom Kaler has looked for information on the state of the athletics department is Dave Mona, a University graduate and fixture in Gophers athletics âÄî namely with regard to fundraising âÄî who co-hosts the âÄúSports HuddleâÄù program on WCCO News Radio.

When Maturi hired Mona as a special assistant during the search for BrewsterâÄôs replacement, Mona said the atmosphere surrounding Maturi and the athletics department âÄúwas about as negative as any time during [MaturiâÄôs] tenure.âÄù

Mona cited a campaign waged by Save Gopher Football, a conflagration of former players and University alumni which mobilized against Maturi during the search. The group said Maturi had shut them out of the search process and that he could not be trusted to find a suitable replacement for Brewster.

âÄúWe wanted to be a part of [the search],âÄù said Doug Kingsriter, a former All-American Gophers tight end who played for the Minnesota Vikings in the 1970s and was an active member of the campaign. âÄúWe very much felt excluded from the process, and actually from the program.âÄù

Asked whether he thinks Kaler should extend MaturiâÄôs contract, Kingsriter said: âÄúI do think we need to have some new blood there âÄ¦ SomethingâÄôs got to be different with the athletic department.âÄù

While Mona did not shy from the low points and mistakes of MaturiâÄôs tenure, he portrayed him as a dedicated and worthy administrator who cares deeply for the University and all of its student-athletes.

âÄúThe guy has logged more hours in that chair than most ADs would do in 20 [years],âÄù Mona said.

Whether Maturi will continue to log hours in that chair after 2012 remains to be seen.

Furthermore, despite MaturiâÄôs devotion to all of the UniversityâÄôs sports, Kaler did not deny that cutting some of them could be a reality in the future.

âÄúI think in our current budget situation all the options have to be considered,âÄù Kaler said. âÄúThis depends on a wide variety of things âÄ¦ I think in athletics, as in all other areas of the University, you have to balance the opportunities versus the cost.âÄù