Minnesota was dominated inside by Brittney Griner and the Lady Bears. 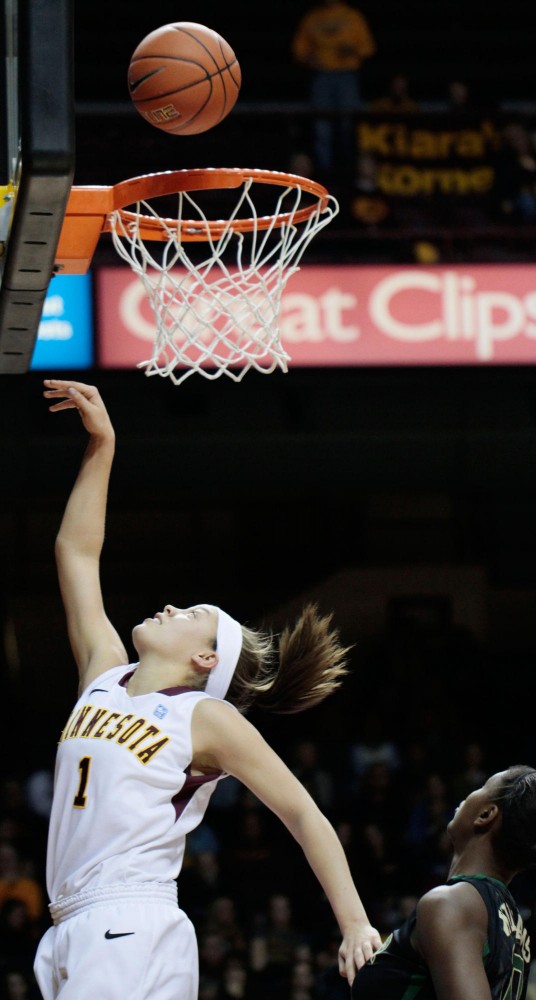 Minnesota guard Rachel Banham goes up for a basket against Baylor on Sunday at Williams Arena.

Minnesota was unable to keep up with Brittney Griner and the No. 1 Baylor Lady Bears on Sunday, losing 89-60. The loss dropped the Gophers to 4-5.

Griner led Baylor with 20 points, nine rebounds and five blocks along with her immense defensive presence.

She consistently beats double-teams and did so against the Gophers on Sunday.

Griner played for Team U.S.A. in the Olympics and was the Player of the Year in the Big 12 last season. Griner attributed her experience with Team U.S.A. to her improvement this season.

When Griner wasnâÄôt leading the attack, she passed it to open teammates such as guard Odyssey Sims. Sims had 15 points and nine assists along with four steals.

âÄú[Griner] ran the floor pretty good, just knowing to give it to her and know whoâÄôs open, and they did a great job finishing,âÄù Sims said.

The Lady Bears beat the Gophers in almost every statistical category and dominated inside, out-rebounding Minnesota 58-39.  Baylor also outscored the Gophers 44-22 in the paint.

Minnesota head coach Pam Borton said the Gophers need to have a better mindset and focus when playing in the paint.

âÄúIn the first half, we missed 15 shots in the paint,âÄù Borton said. âÄúWe have to start off a little better offensively and make some easy baskets.âÄù

Freshman Rachel Banham put together a decent game against the No. 1 team in the nation.  She had 19 points, five rebounds and three steals.

âÄúCoach said to me right before half that I need to start making plays and I need to start playing like IâÄôm one of the best players out there,âÄù Banham said. âÄúI think that really helped me.âÄù

Banham shot 60 percent from the floor in the second half.

BaylorâÄôs defense was the story of the afternoon.  Led by Griner, the Lady Bears had nine blocks, 10 steals and many tips on Minnesota passes.

Baylor led the Gophers 48-21 at halftime, but only outscored Minnesota 41-39 in the second half.

âÄúI donâÄôt want to sound like IâÄôm not appreciative of a 29-30 point victory.  I am,âÄù Mulkey said. âÄúI thought we didnâÄôt defend very well in the second half.âÄù

The swarming Baylor defense forced the Gophers to shoot only 18.9 percent in the first half and 30 percent for the game. Borton said she was encouraged by the improvement in the second-half shooting.

âÄúI think in the second half we were very comfortable offensively,âÄù Borton said.  âÄúI think we found our rhythm, and our guards did a great job making shots and making plays. We need better post play.âÄù

Senior Kiara Buford had a tough start, but finished the day with 13 points on 6-for-16 shooting.

Banham, Buford and Leah Cotton all scored in double figures.  Cotton shot only 4-for-17 from the floor.

âÄúThey have great defense, but I missed my shots because I didnâÄôt hit them,âÄù Cotton said.

The three Gophers guards led the team in the second half.

âÄúOur guards can take over games,âÄù Borton said. âÄúThe guards have the ball in their hands the majority of the game, and I think they need to take more responsibility in knowing they can do this every single game, and itâÄôll open up our post players.âÄù

Shooting has been the GophersâÄô weakness this season.  They shot 34 percent against Wake Forest in an 82-65 loss Thursday night.

The Gophers will play their next three games at home after playing six of nine on the road.  Borton said it will be nice to have a string of games at home this week.

Minnesota will host Air Force at 7 p.m. Wednesday at the Sports Pavilion.