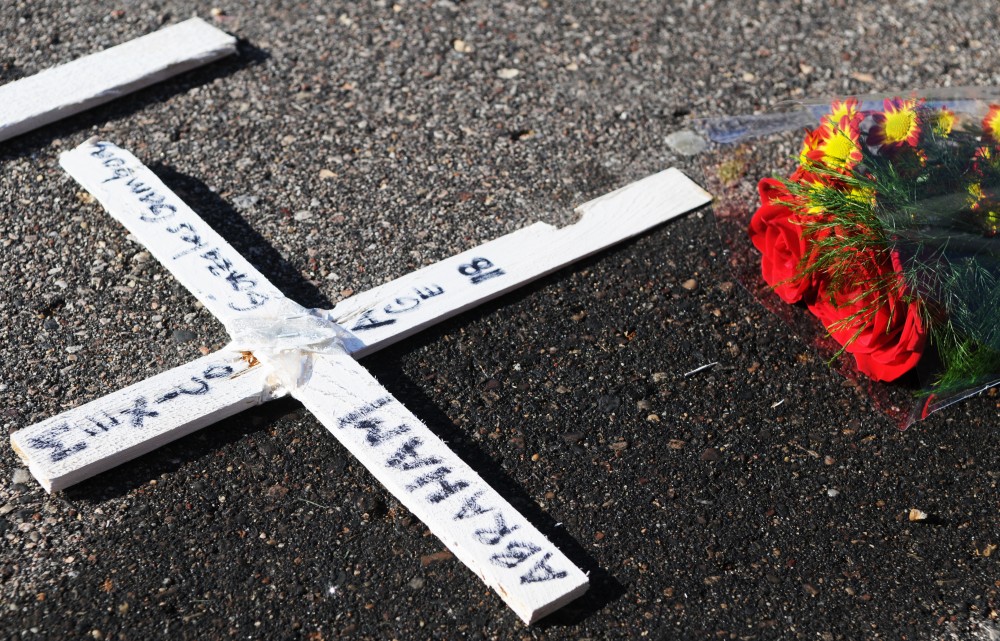 Day of the Dead Rally

Five hundred crosses bearing the names of immigrants who have died were carried Sunday in remembrance of their lives, as a part of the DÃ­a de los Muertos procession held in the Phillips neighborhood in South Minneapolis. The event, hosted by the Minnesota Immigrant Rights Action Coalition , was planned to commemorate the deaths of thousands of men, women and children who died crossing the U.S.-Mexico border, those who have died in detention and those who have been victims of hate crimes, Spanish and global studies senior Emily Smith said. Smith, who interns with MIRA c through a University of Minnesota service learning class focusing on the Chicano and Latino community, said by putting names to the numbers of people whoâÄôve died makes the statistics more personal. The U.S. Border Patrol estimates that 1, 954 people died crossing the border between 1998 and 2004. âÄúWeâÄôre breaking it down to an individual level, so we can remember the individuals rather than just see a number posted,âÄù she said. The U.S. Government Accountability Office reported in August 2006 that yearly border crossing deaths have doubled since 1995. The procession began at 1 p.m. at the Holy Rosary and Santo Rosario Catholic Church and finished at El Milagro: The Miracle Lutheran church, both in Minneapolis. Community members, business owners and students from the University, Augsburg College and Minneapolis Community and Technical College all carried crosses along the procession route. Volunteers read names, ages and causes of death for those who lost their lives as immigrants, with the crowd responding âÄúpresente,âÄù meaning âÄúpresentâÄù in English, to honor them. Spanish and global studies senior Tessa Schneider said she came to the procession to show her support for immigration issues. âÄúI think the U of M is kind of isolated from the outside community,âÄù she said, âÄúespecially from the Phillips neighborhood.âÄù Schneider said seeing the crosses is more effective than reading a number. âÄúVisual representations speak so much louder,âÄù she said. Francisco Segovia , a volunteer for MIRAc, said he presented to the idea for the procession based on other events he has been to where the names of the dead have been read. He said when he attends events like these he gets the chills because hearing names makes the people real, which is why he urges students to get out and meet the people they are learning about at college. Many people in attendance knew someone who has died crossing the border and some have witnessed deaths themselves, Segovia said. For students, this can provide an opportunity to get into the streets and put a practical face to topics like illegal immigration and immigrant rights, he said. âÄúThe best way to learn is to be close to the people you study,âÄù he said. Following the procession, a traditional Day of the Dead alter was constructed. Smith said students need to develop an understanding of immigrant cultures because it isnâÄôt an issue that is going away any time soon. âÄúWe need to build a bridge with the Minneapolis community and immigration is a big part of that,âÄù she said.