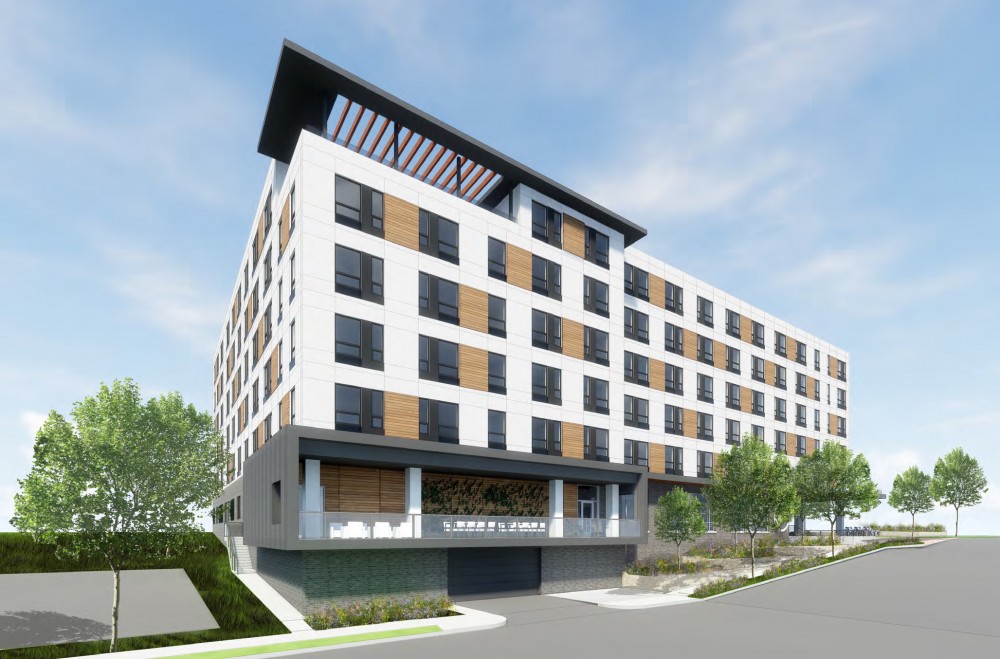 A rendering of the proposed 4th street lofts in Prospect Park

Developers of a new six-story apartment complex proposed for Prospect Park are pushing for less parking in favor of added density.

Developer Harlem Irving Companies has worked with the Prospect Park Association to put together a building proposal the neighborhood association believes is in accordance with Prospect Park’s vision for future development. Harlem Irving Companies is asking the City of Minneapolis to approve a reduced amount of required parking slots and a height increase for the building.

The 169-unit complex, called the 4th Street Lofts, would be constructed at 2813 4th Street SE. The development would consist of 107 micro-units, 36 one-bedroom units and 26 two-bedroom units. Its proposed six-story size will require it to be rezoned as high density.

“We are for density,” Gilyard said. “We’ve taken that position because we believe there was a great opportunity here to provide a different kind of housing, workforce housing, more affordable housing than is available in Historic Prospect Park.”

In January, Harlem Irving Companies and PPA signed a joint letter in support of the project and the applications it has filed.

The development has applied to reduce the required number of parking spots from 68 to 42. Gilyard said PPA would have preferred even less parking.

Ward 2 Minneapolis City Council Member Cam Gordon said many developments along the Metro Transit Green Line have tried to reduce the minimum number of parking spaces and increase density. He said this is in line with the Prospect Park 2020 plan, which seeks to make Prospect Park a “transit-oriented city-within-a-city.”

“It’s definitely been a plan … of how we can get more density, that’s why the light-rail was built,” Gordon said.

The development will be L-shaped with a landscaped area in the center. It will also feature a storm water garden and a pollinator garden.

Gilyard said opportunities for more green spaces are a reason the neighborhood supports density. The development will sit across the street from the Green on Fourth apartments, which also feature landscaped and green areas. A proposed city park would be located between the two developments.

“We thought if we could develop density, we could develop the amenities that we don’t have, like grocery stores and shops, parks. All of those other things will come with density,” Gilyard said.

Gilyard said he hopes developments like the 4th Street Lofts will draw young professionals and others in the workforce looking for single-person units. While he says the neighborhood welcomes students, the association expressed concerns about multi-bedroom units that would house several unrelated people.

“We think this area really has the potential to be a home for young professionals, for empty-nesters. I think in today’s world, a staggering number of households are one person,” he said.

The City Planning Commission will have a public hearing regarding the development’s applications on Feb. 20. The commission recommends the City Council approve all applications.