Minneapolis issued more snow emergencies than ever this winter, and the tows were out in force. 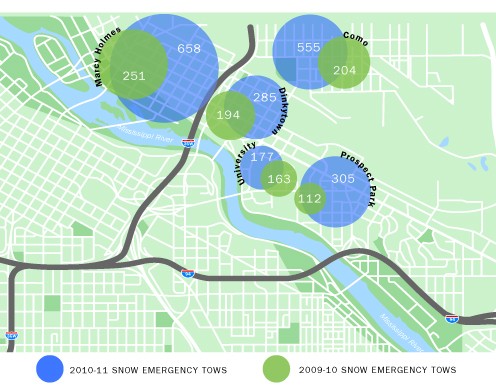 The city of Minneapolis has issued more snow emergencies than ever before this winter. Towing numbers increased accordingly.

When University of Minnesota student Veronica Rosiejka came home from work one evening last November, she noticed her car was missing.
Her first thought was that it had been stolen. But upon realizing that there were no other cars parked on her Southeast Como neighborhood street, she came to the same conclusion as almost 2,000 others around the University over the past three months.
Her car was towed during the first of what has been a record eight snow emergencies in Minneapolis so far this winter.
Last winter, the city called three snow emergencies, resulting in 929 tows in the Marcy Holmes, Stadium Village, Prospect Park and Southeast Como neighborhoods, which make up only 4 percent of the cityâÄôs total square footage.
This yearâÄôs tally shot up to 1,991 âÄìâÄì almost a third of the cityâÄôs total number of tows, according to the city of Minneapolis.
The high proportion of tows is due to the lack of off-street parking in the dense neighborhoods surrounding the University, Minneapolis spokesman Matt Laible said.
âÄúFive percent of the cars not moved [around campus] is a lot different than 5 percent not being moved where itâÄôs less dense,âÄù Laible said.
Minneapolis public works officials donâÄôt call snow emergencies based on a threshold of snowfall. Rather, factors like forecasts and previous accumulation contribute to the decision.
Minneapolis spokesman Matt Lindstrom said 4 to 5 inches of snowfall will usually be enough to call a snow emergency.
ThereâÄôs a perception among some that snow emergencies are money-making opportunities for both towing companies and the city. But Minneapolis officials point to the contrary.
The city acts as a contractor to six towing companies, each responsible for their respective zones within the city. S&T Transport Inc. is responsible for the zone that includes the University area.
For every car towed in the University area, the city nets $8. The amount of revenue for the city varies by the contract, ranging from a $98.55 profit per car in one zone to a $6 loss in another.
According to Lindstrom, the city netted $38,000 during the snow emergency initiated Dec. 4, 2010. That revenue helps offset the operational costs of the impound lot but doesnâÄôt usually cover all of the expenses, Lindstrom said.
Steve Schmit, owner of Schmit Towing, said the few days of intense business arenâÄôt a gold rush for him either.
âÄúWe take whatever business we can get,âÄù Schmit said. âÄúThis is just another avenue for us.âÄù
While this winter has seen enough snowfall to topple the Teflon roof of the Metrodome in early December, the numbers arenâÄôt record-breaking.
The 78.7 inches of snowfall that blanketed Minneapolis this winter fall short of the mark set in 1984, when the city was doused with almost 100 inches of snow.
Minneapolis averages 13.6 inches of snow between March and April, so there are still opportunities for further accumulation.
Although the University area accounts for a significant portion of snow emergency tows, the numbers are consistently dropping.
The latest snow emergency, initiated Feb. 21, brought in 63 percent fewer tows from the University area than the first snow emergency of the season.
Laible said the city has been trying to get people around the area to follow parking rules for years, using outlets like Facebook, Twitter and e-mail alerts.
Although Rosiejka doesnâÄôt currently have a car, her experience getting towed has made her more vigilant of snow emergencies.
âÄúI have a lot of friends with cars, so when they come over and it snows I know where to tell them to park,âÄù Rosiejka said. âÄúIâÄôm definitely more aware of how it works.âÄù