All five pitchers in Sunday’s game gave up at least two earned runs. 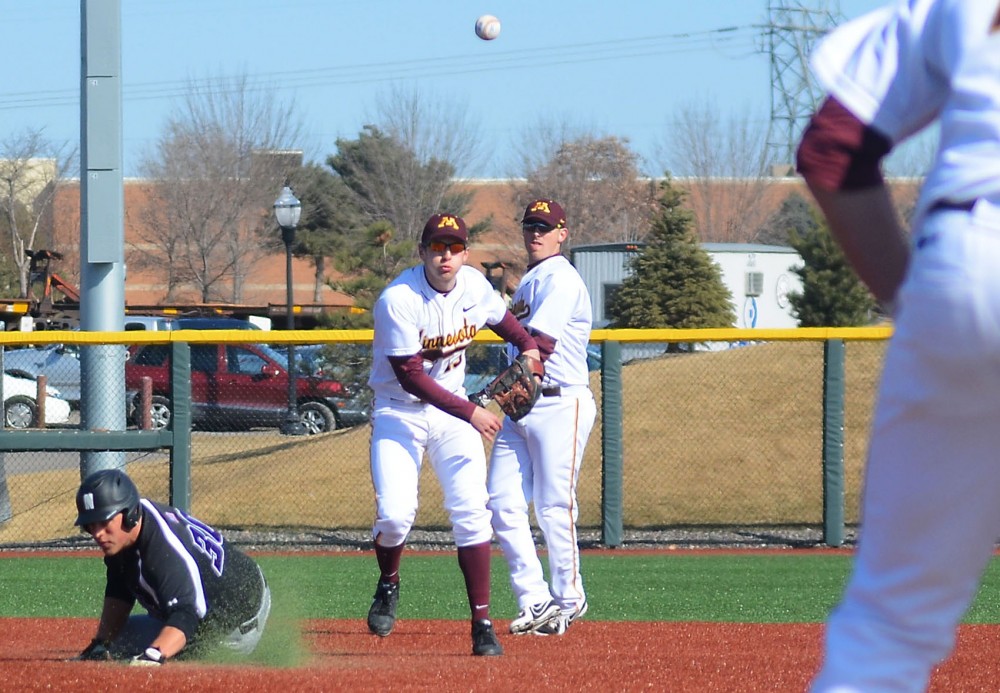 Infielder Luke Pettersen throws the ball to catcher Toby Hanson at first base during a game against Northwestern at Siebert Field on Saturday.

Third baseman Tony Skjefte looked right at home in Minnesota’s first series of the year at Siebert Field over the weekend.

The senior went off for six runs batted in (RBIs). But Skjefte’s performance wasn’t enough for Minnesota to topple Northwestern, which won two of three games.

The Gophers won Friday’s contest 8-3 before losing 2-1 in extra innings on Saturday and getting pummeled 19-7 Sunday.

“We didn’t pitch well … and that’s really the difference in who won the series and who didn’t win the series,” head coach John Anderson said. “We [have] got work to do, no question about it.”

Skjefte helped jumpstart the Minnesota offense in each of the three games over the weekend.

“I’ve started to swing the bat well and see the ball really well,” Skjefte said. “I’ve been getting into really good situations to get RBIs, and I think that’s the biggest thing — people in front of me getting on.”

On Friday, the senior knocked in four of his teammates after the Gophers fell down a run in the first inning of the game.

He recorded Minnesota’s only RBI on Saturday off a fielder’s choice after the Wildcats went up in the second inning.

After Northwestern once again got off to a hot start offensively on Sunday, Skjefte drilled a pitch to left field to record his sixth RBI.

His hit in the last game helped Minnesota claim a 4-2 advantage, but it was its only lead of the contest as five different pitchers gave up at least two runs apiece.

“I thought we were just really average on offense compared to what we have been doing all year,” Anderson said. “We started out the Friday game, [Sunday’s] game with some energy and some pretty good at-bats, and then we seemed to die off.”

“I thought we pitched great [Saturday],” redshirt senior catcher Matt Halloran said. “I think we just didn’t have that clutch hit. We were just lacking that.”

“You’ve got to rebound, come back to the park and get ready to play,” Anderson said. “That’s baseball.”

On Friday, the Gophers got off to a solid start, cruising to an 8-3 win over the Wildcats.

Senior Ben Meyer put together a solid performance, which fell just short of a complete game.

“Benny was great,” Halloran said. “He was really commanding the fastball well. … It’s fun catching when guys are throwing like that.”

However, the Gophers couldn’t replicate the same pitching success on Sunday.

“I thought we pitched well the first two days, didn’t pitch well at all today,” Anderson said. “We threw 200 pitches, only struck out three guys [and] didn’t have great command at all in the game.”

Ultimately, the home-opening weekend turned into a tough weekend for Gophers baseball.

“We’ll be fine,” Halloran said. “We can’t panic right now. We’re halfway through the season. It’s stuff we can fix, so it’s a good thing.”