The Gophers trailed by at least 10 points after each quarter on Wednesday. 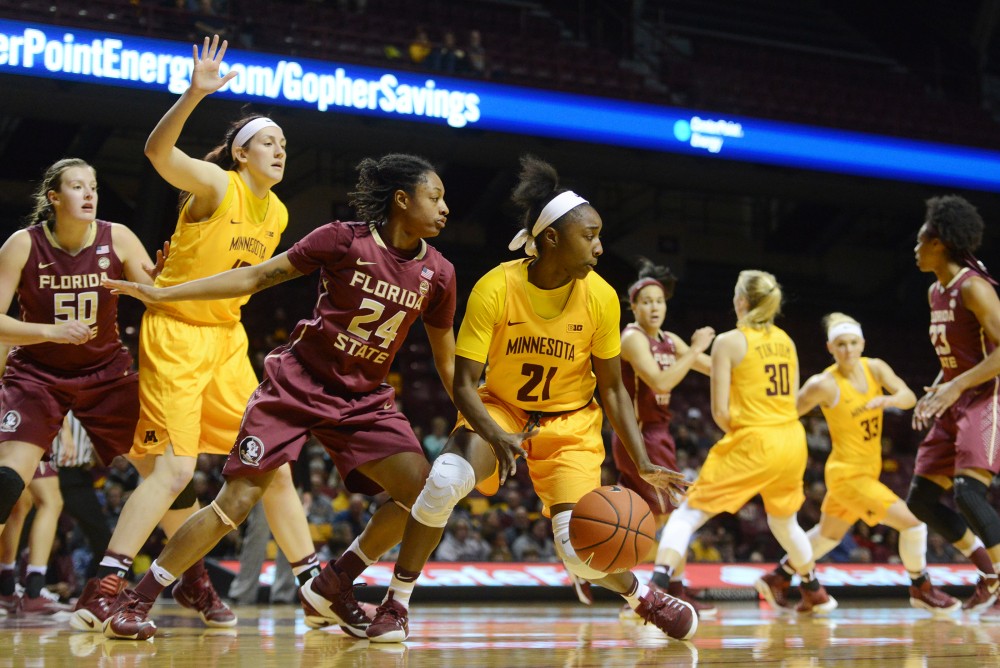 No. 8 Florida State beat Minnesota 75-61 to give the Gophers their third consecutive loss.

Florida State (7-1) out-rebounded the Gophers 51-32. Head coach Marlene Stollings said she thought Minnesota (4-3) would be better on the boards after winning the rebounding battle against Georgia and North Carolina last week.

“The overall theme of the night was rebounding,” Stollings said. “If you look at the second half, there’s plenty of opportunities to get back in the game even at the free-throw line. If we shoot a little bit better, we’re back in the game.”

As a result of the turnovers, Florida State scored 18 second-chance points.

“We knew that it would be a battle on the boards,” Florida State head coach Sue Semrau said. “I thought Ivey [Slaughter] was tremendous. It was her turn to step up and really assert herself there.”

Minnesota’s leading scorers were Kenisha Bell with 17 points and Carlie Wagner with 15 points.

Imani Wright hit three-pointers in the first two minutes to get Florida State off to a hot start.

The Seminoles built a solid lead and never let the Gophers back into the game.

Florida State shot 67 percent from the field in the first half. They drained 7-9 from behind the arc.

“We just have a lot of different weapons,” Semrau said. “You can’t really focus in on one player.”

Florida State guard Nicole Ekhomu didn’t miss a shot in route of scoring 16 points in the opening half.

The Seminoles led by as much as 23 in the first half.

In the first half, Minnesota was outrebounded 25-8. Florida State scored 13 points from offensive rebounds in the half.

“We’ve got to come out and play for 40 minutes with physicality and toughness and aggressiveness,” Wagner said.

Wagner added that the team needs to keep that mentality in every game and every practice to get better.

Minnesota had to earn the points they got. They were blocked on six of their shot attempts going into halftime.

Wagner said Florida State played well defensively, but she thought Minnesota created enough chances to get back in the game.

The Gophers held Florida State to 19 points in the second half after allowing 56 in the first half.

“We were much more active,” Stollings said. “We took the ball away from the high post. In the first half, we didn’t. We let it get in there, and it broke us down quite a bit.”

Although the Seminoles weren’t as efficient scoring points in the second half, they didn’t allow Minnesota to come within 14 points.

Stollings knows they have more work to do to compete with the top schools in the country.

“We upgraded the schedule for this very reason — to see where we’re at and where we’re heading in terms of the big picture of our program,” Stollings said. “We have to regroup and learn and grow and get right back after it quickly.”