No. 6 Minnesota hands No. 22 Michigan its second loss of the season

Gophers bounced back from large deficits in first and second sets to sweep Wolverines. 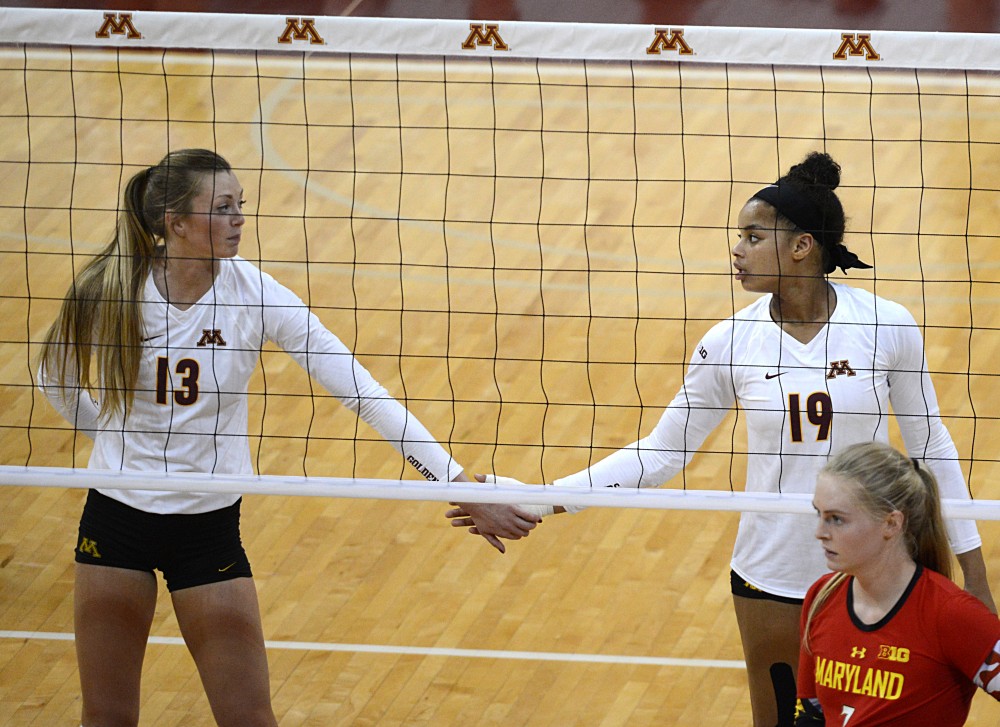 Gophers Molly Lohman, left, and Alexis Hart touch hands after a point against Maryland on Sept. 23, 2016 in the Sports Pavillon.

Just when it seemed victory was out of reach for the Gophers volleyball team on Saturday, they bounced back.

“I think it was a little bit different than when it was in our gym,” said senior middle blocker Molly Lohman. “I think a lot of it was because they were in their gym, so I think they were bringing a lot more.”

Freshman outside hitter Jasmyn Martin had the go-ahead kill in the second set when the Gophers stormed back from being down 8-16 to go ahead 18-17.

“It was really cool,” Martin said. “I felt like in the second set the energy really changed from the first, so I thought that being able to get that might help my team bring the energy up.”

Martin also responded to an unsuccessful challenge by head coach Hugh McCutcheon with another kill to put the Gophers up 19-18 in the second set — a lead the team never gave up.

Lohman, who had 14 blocks in the first matchup with Michigan, had another 10 in the win Saturday afternoon.

“It’s awesome to get a block,” Lohman said. “I think that’s my favorite thing to do in volleyball.”

Minnesota won their first matchup against Michigan 3-0 in late September. That matchup included a 25-8 fourth set victory by the Gophers.

On paper, Saturday’s match was easier for Minnesota, as they finished with the sweep. However, unlike the fourth set in their September match against the Wolverines, each set remained competitive from start to finish.

“They clearly had made some adjustments,” McCutcheon said. “[Michigan] started all three sets really well offensively.”

“I was just really proud of the way our athletes weathered the storm,” McCutcheon said. “To be able to come back in all of the sets and find ways to win down the stretch was impressive.”

With the win over Michigan, Minnesota has won three consecutive matchups.

“I think these wins were really important, especially because of those losses,” Martin said. “I thought we got our groove back, and now we’re home the next few matches.”

After four straight matches on the road, the Gophers seemed ready to get back to Maturi Pavilion in front of their home crowd.

“It’s been a long stretch on the road and it’s going to be really exciting to have our fans and our gym again,” Lohman said.