Data Refuge helps save data that can be important for research and lawmaking. 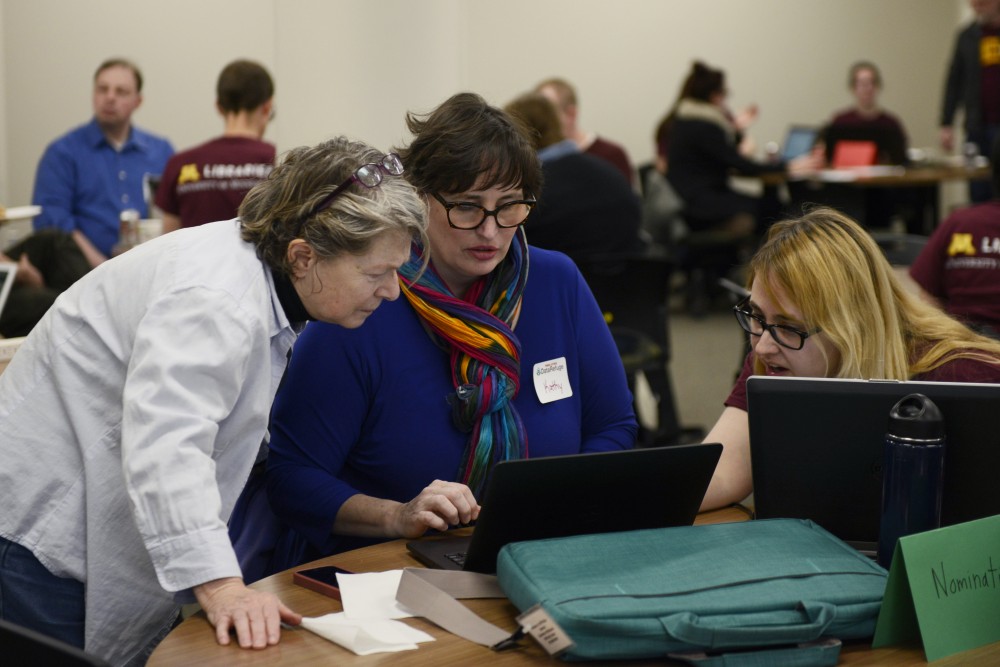 Shannon Farrell, a University staff member, works with Kathy Shipp, center, and Maria Fitzgerald, left, during the DataRescue event on Friday, Feb. 24, 2017 at the Humphrey School School of Public Affairs.

Data released by governments isn’t always immune from change or being taken down from easy public access, so volunteers from the University of Minnesota and across the state spent nearly 13 hours over the weekend scouring the web to save public data at DataRescue, which was held at the Humphrey School of Public Affairs.

Similar events have been held recently to archive data that some say is at risk of being wiped from federal websites by the President Donald Trump’s administration.

The event was part of a larger nationwide initiative conducted by Data Refuge, a collaborative project between several universities and institutions across the nation that looks to save federal data.

Justin Schell, a Data Refuge volunteer from the University of Michigan, said public data available online can get moved around or taken down when new leaders are elected.

The goal of this project is to make sure that all data, such as climate and environmental information, that is currently accessible for the public remains secure and available, he said.

Alicia Kubas, a University of Minnesota librarian and leader of the DataRescue event, said the University gets federal data and studies, usually PDFs, on a regular basis from the federal government through the Government Publishing Office.

The importance of the DataRescue event is to make sure that the University and the general public have access to digital data that the government has, she said.

The rescue event focused mostly on scientific data and pages from the Environmental Protection Agency and NASA but also collected data on federal funding and election commissions.

Kubas said a survey was conducted at the University to see what kind of data and sites professors and researchers want protected and archived.

Other volunteers pointed to today’s political climate as a reason for the urgency of the program.

“With the new administration, I felt like I needed to do something … this is something I can do,” said Pam O’Hara, a librarian with the Southeastern Libraries Cooperating Central Library in Rochester, Minnesota.

Jody Kempf, a University librarian, said the data that they archive is important information used by researchers and experts.

“If it disappears, it would be alarming,” she said.

In addition to large, available data, volunteers are also looking for niche data that might not come up on the first look, said Benjamin Tillman, an architect from St. Paul volunteering at the event.

Schell said there are more events going on across the country. As long as the public data is in danger of disappearing, the project will continue, he said.