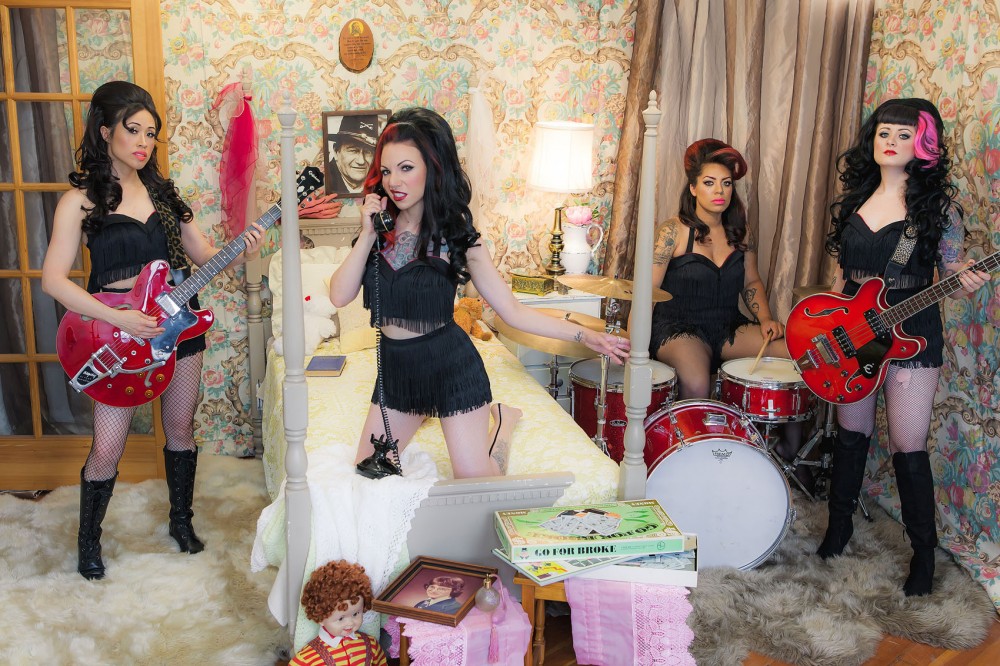 “There’s a certain kind of pompousness about rock ‘n’ roll you don’t see anymore,” Simpson said. “That’s what rock ‘n’ roll is — full of itself and dirty.”

Another track, “Psycho Beach,” captures the 1960s beach-spoof movie with a surf-guitar wash.

With their show at the Triple Rock Social Club on Wednesday — where they will open for horror-core group Calabrese —L’Assassins will jam with their bad girl aura.

“The music and the look and sound is the total package,” Calabrese said. “They put on a great show. Not every [band] fires on all four cylinders like that.”

“Those types of movies definitely influenced us — badass girl, taking over the world,” Clark said. “But still being feminine — looking good while she’s kicking ass.”

For Simpson, L’Assassins’ fun derives from the grrrl power badassery L’Assassins finds in these grindhouse films.

“Our songs go into the vein of B-movie[s],” Simpson said. “It’s about sex and rock ‘n’ roll and all the traditional things that men have been up there singing about, our own way.”

In the video for the single “Backseat Bomp,” the band supplements the tune’s electric howl by shoplifting a liquor store while clad in leather bras.

“We just want it to be women onstage, making good rock ‘n’ roll,” Simpson said. “We try to maintain an outlaw spirit in what we do — more women in control.”

Though the band is based in Minneapolis, crowds have been more responsive to their live edge in Europe, where L’Assassins has toured twice.

“When I’d be playing a solo, there’d be dudes air-guitaring back to me,” Wong said of their European shows. “I don’t think anyone in the U.S. would do that.”

“We want to put on an actual show,” Simpson said of L’Assassins’ vivacious garb. “We like to put together outfits, coordinate and make it a party.”

For Dornbush, who’s an active Christian, this tough chick sensibility is an exaggeration of her everyday personality.

“I’m doing something I love, and I’m happy,” she said. “[But] some Christians might look at it like, ‘She shouldn’t be wearing those fringe booty shorts.’”