The Gophers scored a record amount of points, but fell to powerhouse Indiana in the Big Ten Championships. 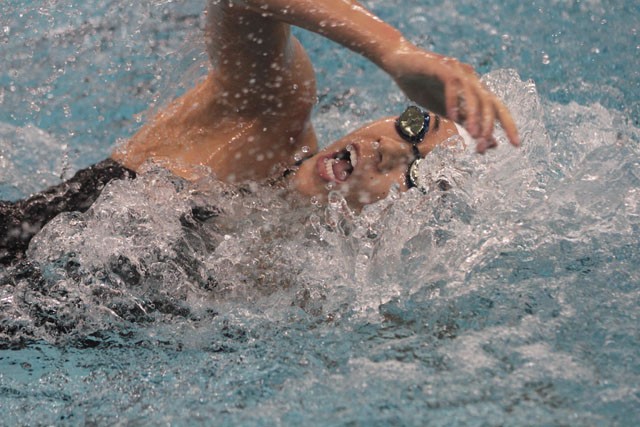 The Gophers womenâÄôs swimming and diving team scored a school-record 578 points this past weekend at the Big Ten championships, but it was only good enough for second place âÄî and it wasnâÄôt close.

It was still a rather impressive showing for the Gophers, despite the second place finish. Minnesota swimmers won six different events and set multiple school records over the weekend.

The record setting started on Wednesday, when the team of Hannah Whitehead, Jillian Tyler, Kaylee Jamison and Meagan Radecke finished the 200-yard medley relay in a school record time of 1:37.37, good enough for a second place finish. Jamison and Tyler were a part of the team that set the previous record time of 1:38.33 in 2009.

Juniors Ashley Steenvoorden and Kelci Bryant did their part to make sure it would continue on day two. Steenvoorden won the 500-yard freestyle for the second year in a row. The All-American set a new school record by finishing in 4:37.66, an NCAA âÄúAâÄù qualifier.

âÄúAshley swam a great race,âÄù co-head coach Kelly Kremer said. âÄúWith about 100 yards to go, she just decided she wanted to be the Big Ten champion and went after it.âÄù

Bryant became the first Minnesota diver to defend a diving title at the Big Ten championships. She won the 1-meter dive with a Big Ten Championship meet and Minnesota record score of 370.30 points.

Day three of the championships was also quite a day for the Gophers. Senior Tyler won her fourth career Big Ten title in the 100-yard breaststroke to become the first Minnesota athlete, and just the 12th in conference history, to sweep an event over a career. Tyler did so in impressive fashion by breaking her own school record with a time of 58.08, the fastest collegiate time in the nation this season.

Bryant earned her second Big Ten title, setting another record in the process. The 1-meter champ defended her Big Ten title in the 3-meter dive with a score of 421.70 points, more than 6 points better than her NCAA championship score of 415.50.

âÄúIt feels pretty good,âÄù Bryant said. âÄúSo far IâÄôm undefeated in my Big Ten career which is really exciting, so IâÄôll work harder and hopefully do it again next year.âÄù

Bryant was named Diver of the Championships for her performances.

Senior Jamison clocked a third school record of the evening with a 52.95 in the 100-yard butterfly and a third place finish.

Tyler and Steenvoorden highlighted the fourth and final day of the championships for the Gophers.

Tyler set multiple records with her performance in the 200-yard breaststroke. Her time of 2:07.11 is a school record, Big Ten championships record and Big Ten record, and is the second-fastest time in the nation this season. She was named the Swimmer of the Championships.

âÄúJill had such an outstanding Big Ten meet,âÄù Kremer said. âÄúWinning four straight in the 100 breast was special, but she also swam so well in the 200 and the relays. IâÄôm so happy to see her recognized for her performances by being named the Swimmer of the Championships. It certainly was well deserved. SheâÄôs had a brilliant Big Ten career.âÄù

Steenvoorden claimed her third consecutive crown in the 1,650-yard freestyle with a season-best time of 15:58.62. With the victory, she became just the second Gopher to win three straight event titles at the conference championships, joining Tyler who now has four titles.

âÄúThe women responded so well,âÄù Kremer said of the weekend. âÄúWe performed very well across the board. Now we look ahead to the NCAA Championships. It will be an exciting meet for the Gophers.âÄù