The Gophers were outscored 73-32 in their three meets over the weekend. 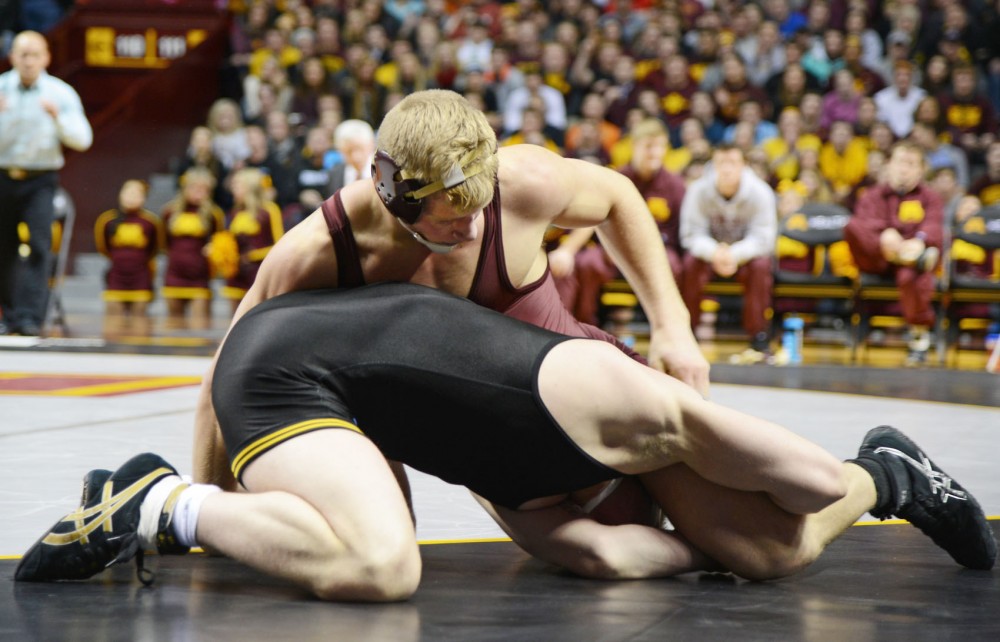 Brett Pfarr wrestles during a match in Williams Arena on Jan. 30, where the Gophers competed against the Iowa Hawkeyes.

Jack White
No. 21 Minnesota faced three ranked opponents in three consecutive dual matches on Sunday and dropped all three to move to 3-3 on the season.
The Gophers lost to North Carolina 20-17, Lehigh 22-12 and North Carolina State 31-3.
The team had an early deficit against the No. 13 Tarheels, losing at 125 pounds.
Redshirt junior Sam Brancale won by major decision in the next match, and Minnesota took a 4-3 lead.
“First dual I think I was pretty aggressive,” Brancale said. “I was able to shut that guy down. I got to my divisions, and I was able to [score] from back point straight to the feet,
so I got a takedown straight to his back. He couldn’t really score on me.”
North Carolina won two matches in a row to go up 9-4.  Minnesota redshirt junior Brandon Kingsley won by major decision at 157 pounds, but the Tarheels then won three matches in a row to increase their lead to 20-8.
Redshirt junior Brett Pfarr and redshirt junior Michael Kroells won the last two matches of the dual, but the Gophers still fell 20-17.
“The mentality when I’m out there is I’m only going for a pin,” Kroells said. “When I know I can’t win the dual, it’s a little frustrating for me to go out there, but you still have to take care of business.”
Minnesota’s second dual came against No. 5 Lehigh. Redshirt freshman Skyler Petry lost on a technical fall, and Lehigh got out to the 6-0 lead.
Brancale and redshirt freshman Tommy Thorn won their matches to tie the dual, but Lehigh won three matches in a row to take a 16-6 lead over the Gophers.
Lehigh won two of the last three matches in the dual as well to win by a final score of 22-12.
Minnesota went up against No. 12 North Carolina State in their third and final dual. The Gophers lost the first eight matches.
Pfarr won his match at 197 pounds to give Minnesota its first three points of the dual.
Kroells had to face the No. 1 wrestler in the heavyweight class and two-time national champion Nick Gwiazdowski. Kroells lost the match 10-6, and Minnesota lost the dual 31-3.
“It’s a little disappointing for me because I thought I was at that level. He’s kind of the measuring stick, and I didn’t quite measure up today,” Kroells said. “I know where I need to go now. I know I need to make a lot of progress.”
Head coach J Robinson said the Northeast Duals were an early wake-up call for the team.
“There’s nothing like results to show you where you stand. It’s something we can talk to our guys about. [We need to] be aggressive and go after people,” he said. “We had a lot of little mistakes that compounded into a lot of matches.”
Delete Image
Align Left
Align Center
Align Right
Align Left
Align Center
Delete Heading