The Gophers hope their home court can lead to a Final Four berth for 2009. 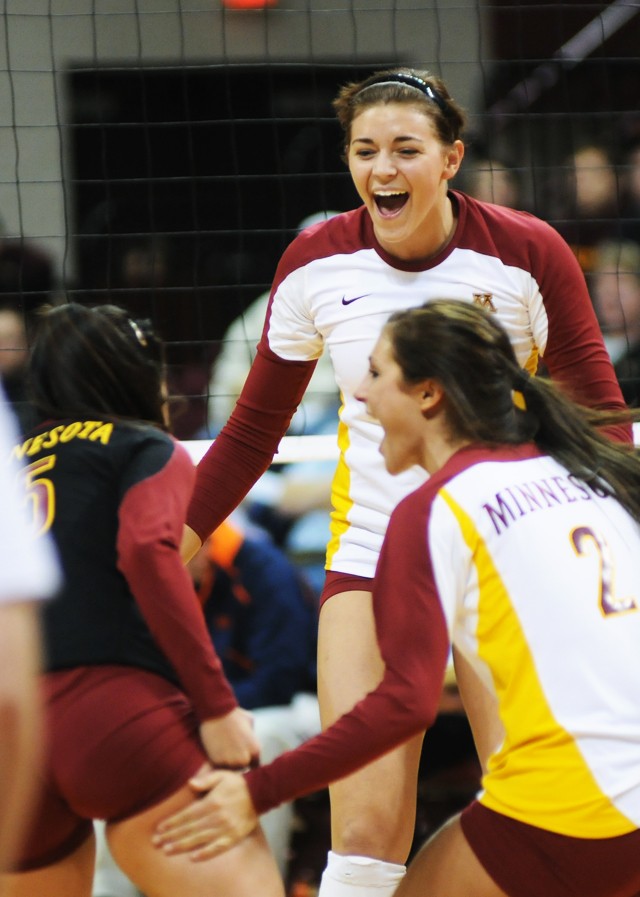 The Minnesota volleyball team knew going into the 2009 season that it would host the regional semifinals of the NCAA Tournament at the Sports Pavilion. But all season, the question was whether the team would be watching or playing when December rolled around. The No. 11 Gophers made it clear they wanted to make it home for the Sweet 16 âÄî and potentially the Elite Eight âÄî and with wins over Louisville and Tennessee last weekend, their hopeful championship journey will have a pit stop in Minneapolis. âÄúGetting back to the regional was one of our primary goals and to make it back creates a desire in everybody to go even further,âÄù Minnesota head coach Mike Hebert said. âÄúWinning begets the desire to win more, and that goes with the territory of winning at this level. WeâÄôre gratified, but weâÄôre still hungry.âÄù The Gophers (26-8) will be playing No. 25 Colorado State (25-5) in FridayâÄôs regional semifinal. The winner will face either ACC champion Florida State (the tournamentâÄôs No. 3 seed) or No. 13 Kentucky for a chance to move on to the Final Four in Tampa, Fla. Despite being an at-large bid into the tournament, Colorado State is not a team to be taken lightly. The Rams beat Middle Tennessee State 3-2 in the first round of the NCAA tournament, then had a 3-1 upset over No. 6 Washington âÄî a team Minnesota lost to early in the season âÄî in the second round to make it to the regional. âÄúI think weâÄôre expecting [Colorado State] to be spunky and to play at the same level they played against Washington,âÄù Gophers senior Christine Tan said. âÄúTheyâÄôre a very scrappy team, and we just need to make sure that we take care of our side of the court. If we play at the level we can play at, and the level we have been playing at in the last couple of weeks, then weâÄôll be able to take care of Colorado State.âÄù If history is to be any kind of an indicator, then the Gophers should expect some exciting matches this weekend. Minnesota last hosted the NCAA Regional in 2004. The Gophers beat Georgia Tech 3-2 at the Sports Pavilion in a match remembered for its fourth set in which the Yellow Jackets won 48-46, which is still an NCAA record for points in a set. The Gophers then came back from down 2-1 against Ohio State in the Elite Eight to win 3-2. From there, Minnesota continued to advance to the national title match but lost to Stanford. Hebert said that having the home crowdâÄôs support was a key reason the Gophers were able to make it through the rough stretches against Georgia Tech and Ohio State. Minnesota once again has that same advantage this season, a rare opportunity to use its fans to help push forward even when the match may not be going as planned. âÄúI think it will be a tremendous help for us to be home with the home crowd,âÄù Gophers junior Hailey Cowles said. âÄúWe have some of the best fan support in the country. I canâÄôt wait to see how many people are going to be here and cheering for us.âÄù Besides home court advantage, Minnesota has plenty of reasons to feel optimistic moving into the later rounds of the NCAA Tournament. The Gophers are on a five-match winning streak, losing only three sets over that stretch . They also lead all Division I teams in assists, averaging 16.43 per set, and in kills 16.86 per set. âÄúWeâÄôre on a pretty good high right now. We feel good about accomplishing most of our goals,âÄù Tan said. âÄúI think that the mood is really high. WeâÄôre feeling really good about the teams weâÄôre going to play this weekend, and at the same time weâÄôre really focused to achieve the rest of our goals.âÄù