Regents also looked at the impact of tuition increases on non-resident students and agreed to buy the Shriners Hospital property. 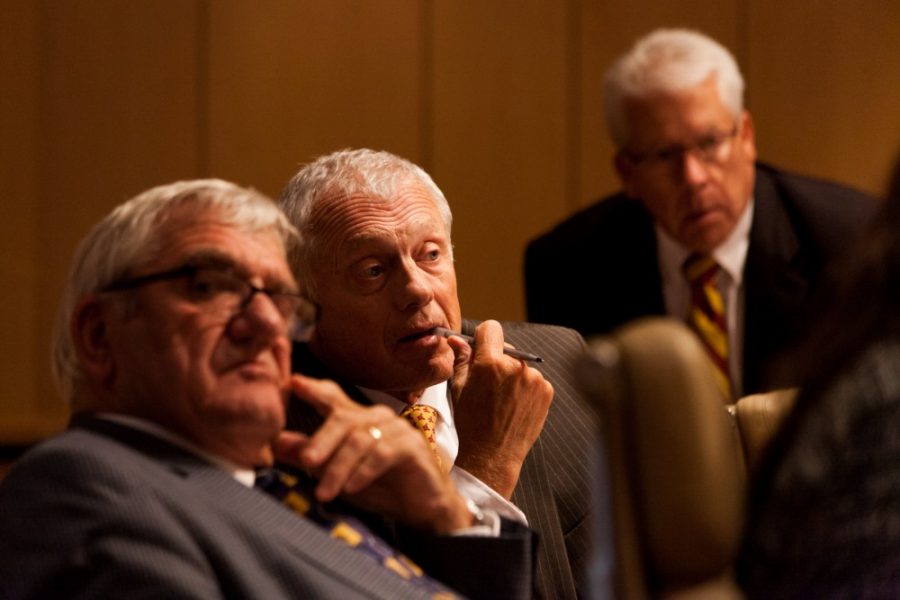 Representative Steven Sviggum listens to an address during the September Board of Regents meeting at the McNamara Alumni Center on Friday, Sep. 13.

Real estate, food service, procedures for renaming and campus climate were among the topics explored by the University of Minnesota Board of Regents during its October meeting.

The board took several actions at the meeting, including approving the purchase of the Shriners Hospital property and passing a resolution to extend the University’s contract with Aramark for up to two years. Also, the effects of several non-resident, non-reciprocity students tuition increases were explained, causing some regents and University officials to deem the move a success.

In an update to regents, President Joan Gabel presented what she has been doing to fulfill a charge related to the springs renaming conversation, and discussed survey data in an attempt to understand the climate on campus.

Squeezed into the end of the Governance and Policy Committee meeting, Gabel updated the board on what she has done surrounding the charge from the board passed in April.

Sharing an outline of her plans to create policy around how to rename a building, Gabel will share example procedures in December, get board input in February and have a goal to take action on the policy in June.

Gabel has met with a variety of people, including members of the faculty task force that created the report recommending renaming last spring. She created an event series with historians and is working with faculty to grow coursework and research around the University’s history.

Regent Michael Hsu questioned whether Gabel should be working on fulfilling her charge yet, as he believes the task force’s work needs to be revisited and basing educational opportunities on the report is premature.

Hsu criticized the task force report throughout the process of renaming and has suggested it go through a scholarly peer-review. The task force stands by its work.

“I don’t think there is any concern with launching an event series that brings in subject matter experts, I think in fact it is how we look at institutional history across a broad spectrum,” Gabel said.

Any action from the board to review the task force report would be separate from her charge outlined in April, Gabel said.

Board Vice Chair Steve Sviggum suggested they don’t become overburdened with the “higher education way” of using committees to do everything. He said he would be open to adopting principles for renaming used at Stanford University.

Regent Mike Kenyanya referenced some regents’ desire to address this quickly, saying this issue got to the board because of students and faculty and “this process needs to be owned by the University community.”

Regents and University administrators called a push to increase NRNR tuition a success, meeting the goal of the board to stack up in the middle of the Big Ten Conference.

The move has increased the amount of money from NRNR students aiding them to keep resident tuition increases to a minimum. Still, fewer NRNR students are coming to the University since the first double-digit increase in 2017.

University officials indicated in the meeting it is unlikely another steep hike is on the horizon.

“We probably don’t need to be double-digit to stay in the median of the Big Ten publics,” said Brian Burnett, senior vice president for finance and operations. “I don’t think we are leaning towards another double-digit tuition increase being recommended, but we just are starting to put this together.”

Still, some regents see the need to continue to push NRNR tuition higher and reduce the burden on resident students.

“We have a seriously high in-state tuition compared to a Wisconsin or an Iowa,” Hsu said. “I still think that we should be helping the in-state students a little bit by freezing or even lowering tuition by a percentage point or two.”

Bob McMaster, the vice provost and dean of the Office of Undergraduate Education, was hesitant about continuing increases on out-of-state students drastically as it could make recruiting them more difficult.

Regents approved an increase last December wanting to have it finalized before making its two-year funding ask from the state last spring. Because it is not a biennium year at the Legislature, the board will make a decision on NRNR tuition later this spring.

The board approved an up to two-year extension to the University’s dining contract with Aramark with the intent to reevaluate who does food service on campus. This spring they will put out a request for proposals from other food service companies as well as explore the prospect of handling it in house.

The move is in response to a push from the Minnesota Student Association for the University to handle its own food service and discontinue working with Aramark. MSA also lobbied regents for a voting member on a task force evaluating the school’s food service, something regents generally agreed should happen.

“I believe it would be absolutely appropriate,” Regent Darrin Rosha said. “The alternative would be that anyone who serves on that is compelled to purchase a meal plan so that everybody has some skin in the game.”

Gabel presented an update to the University’s systemwide strategic plan, proposing that certain commitments should be pursued at all campuses in the University system.

These include student success, innovation and fiscal stewardship. Gabel said prioritizing these commitments on all campuses would strengthen cohesion between campuses.

Gabel said the commitments may be changed depending on feedback from students, staff and faculty in the future.

Regents approved the purchase of the Shriners Hospital site just southeast of the University to house a specialty pediatric clinic, a move that had unanimous support on the board.

Medical School Dean Jakub Tolar said this is not just a priority for his school, but one for Gabel and for its M Health partnership with Fairview. When asked if this endeavor by the University would be good for mankind in general, Tolar emphatically replied “yes.”

“I cannot be more eloquent on this, this is the one opportunity we have to be unique,” Tolar said. “We serve Minnesotans, but by virtue of serving Minnesotans well, we serve everyone.”

Michael McGough contributed to this report.